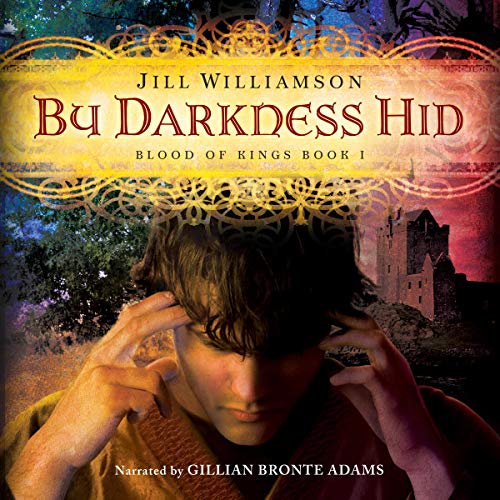 Half of Er'Rets is locked beneath an impenetrable shroud. On the side that still sees the sun, two young people struggle to understand the mind-communication abilities thrust upon them.

It's called bloodvoicing. Some say it's a gift. One of the newly "gifted" wish it had never come.

Achan had been a slave all his life. Worse than a slave - a stray. He is consigned to the kitchens of a lord and forced to swallow a foul potion every day. When an enigmatic knight offers to train Achan for the Kingsguard, he readily accepts. But his new skills with the sword do not prepare him for the battle raging between the voices in his head.

Vrell Sparrow is not who she seems. She masquerades as a boy to avoid capture by the powerful forces that seek to exploit her. But Vrell feels called to help a young squire who recently discovered his bloodvoicing gift, even if doing so requires her to work with those who could destroy her.

While Achan learns to use his new ability, Vrell struggles to shut hers down. All the voices strive to learn Achan and Vrell's true identities - and a different kind of voice is calling them both.

Toward a destination that is by darkness hid.

I am so excited that my favorite series by my favorite author became an audiobook! Gillian Bronte Adams did a splendid job bringing life to the characters. I am eagerly awaiting the next two books.

The struggle of Achan choosing to do what is right in a society that doesn't care gives me courage each time I reread and now re listen to. Vrella's fight to keep who she truly is while having to hide provides encouragement that if you relay on the Most High anything is possible.

I love the comedy, the mystery, and the love that Jill was able to spin into a fantastic story. I highly recommend By Darkness Hid!

Even better on Audible!

I have owned this book almost since it came out and I didn’t think anything could get better. I was wrong. The audio book brings the characters into sharp focus with marvelous voicing. I can’t wait for the next book on audio!

Love the writing, characters, plot... all of it!!!

I have loved this book and reread it several times over the years. I am now 60 years old. I smile each time I read it and now LISTEN to it! The narrator Ms Adams was PERFECT. Emphasizing but not overemphasizing. I felt she enjoyed it as much as I did. Jill Williamson writes a wonderful complex story where all the threads are woven expertly in the end. Nothing left undone. All parts important and used to make a great read. The characters are so multifaceted pulled into enormous good and bad as their situation and true self comes through. My son read this an wanted to ”strangle Vrell" at times always doing the impulsive grander good and many times causing more trouble than anything else. But you gotta love them. Fantastic story, God's fingerprints throughout. Wonderfully done. Will always hold a cherished place in my favorites list. Note:. I texted a note to the author to tell her how much her story meant to us a few years ago and she texted back! Such a lovely lady with a great sense of humor and relatability. Keep doing what you do Jill! Keep using your powers for good!

I bought this book because I’ve been searching for something to hold my attention, this does. I loved it that the Author grabs your attention from the start. The main character starts out lowly and comes of age and maturity. Tough luck from the beginning but he brings you along for the ride. I am desperately waiting on the next book