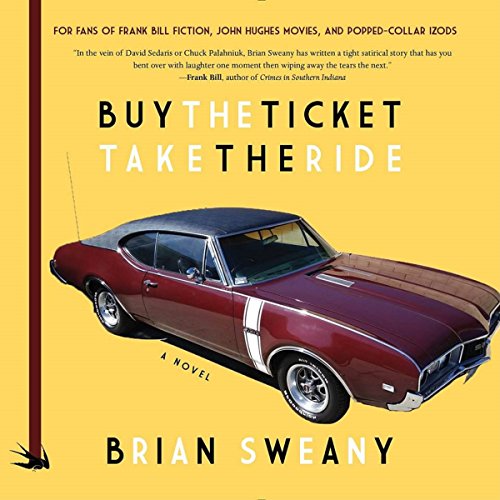 Buy the Ticket, Take the Ride

Buy the Ticket, Take the Ride

"If anybody ever shuts you in Indiana...and you don't at least write some unconstrained something or other, I give up hope for your salvation." - Ezra Pound, in a letter to William Carlos Williams. "I was goofing around like everybody else in Indiana, and all of a sudden stuff came gushing out. It was disgust with civilization." - Kurt Vonnegut

Hank Fitzpatrick's life is what you might expect from a manchild stumbling his way from his teens to his thirties in small town Indiana: hypersexual, drunk, stoned, prone to fits of spontaneous masturbation, occasionally Catholic, and accidentally well-intentioned. Caught in the crossfire of raging hormones, bad decisions and family tragedy, Hank is just a boy not yet ready to be a man. Buy the Ticket, Take the Ride is a roman à clef rooted in Brian Sweany's own tragicomic life, from his childhood growing up in southern Indiana to his early adult years working in New York publishing. And if that's not your thing, you can at least stay for the 80s music, or else the cameos by Johnny Depp, Woody Harrelson, and Kool and the Gang.

A ride well worth taking

Just a great story four our generation. Great characters easily related to and care about. Great inside references for anyone familiar with Indianapolis, but will be enjoyed by anyone.
Narrator brings real life to the story and characters.

loved trying to match the people, places, and events from the book to their true characters! Very funny!!!

Grow with Hank as he steers through drink, sex, heartache and mundane everyday life with a slightly foolish, yet likeable ease.

If anyone could explain the end to me, to make sure I got it, it'd be much appreciated!