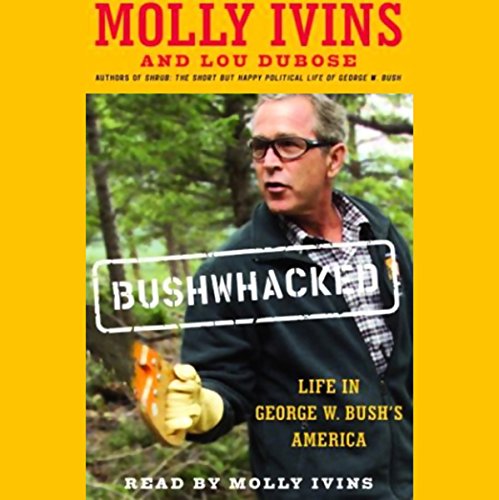 For years, best selling political commentator Molly Ivins has been sounding the alarm about George W. Bush. In Shrub, her 2000 skewering of presidential candidate Bush, the inimitable Ivins, with co-author Lou Dubose, offered a devastating exposi of Dubya's career and abysmal record as governor of Texas. Now, in their second book on our current White House occupant, Ivins and Dubose take the wire brush to the Bush presidency and show how he has applied the same flawed strategies he used in governing Texas to running the largest superpower in the world.

Bushwhacked brings to light the horrendous legacy of the Bush tax cut, his increasingly appalling environmental record, his administration's involvement in the Enron scandal, and the real Bush foreign policy - botched nation building in Kabul and Baghdad, alienation of former allies - and, unfortunately, much more. Ivins and Dubose go beyond the too frequently soft media coverage of Bush to show us just how damaging his policies have been to ordinary Americans - "the Doug Jones Average," rather than the Dow Jones Average. Bushwhacked is filled with sharp observation, humor and compassion for the people often ignored by the federal government and the Washington press corps.

With the war on terrorism posing unprecedented challenges to our civil liberties, and with the Bush economic policy in shambles, it is high time for a close look at the state of our Union. Molly Ivins and Lou Dubose provide just that in Bushwhacked - an incisive, entertaining and damning indictment of the Bush presidency.

"Ivins's mordant wit, political passion, and uninhibited energy are unique among political writers." (Publishers Weekly)
"[Ivin's] reporting is so detailed and writing so witty that even those who come to the book undecided about Bush will likely be outraged by the time they finish it." (Amazon.com)
"Frank and funny and eminently readable." (Booklist)

What listeners say about Bushwhacked

Molly Ivins is an acknowledged expert on Texas politics; therefore, she's in a better position than many to give us the skinny on Mr. Bush, who was governor of Texas for six years. She also went to school with the man, and she's followed his career for many years. Finally, Molly is one of the few political commentators out there who actually had a career as a serious journalist before she became a columnist. She's a graduate of the Columbia Journalism School, and she was a long-time reporter for the New York Times before she returned to her native Texas. With a background like that, I suspect she understands something about standard journalistic practices, such as confirming and verifying sources, as well as the difference between facts, opinions, and pure conjecture. Molly certainly has her point of view, but she's most definitely not a political hack; and it's not fair to dismiss her out of hand because you don't like what she says or you disagree with her political views. Check her facts -- if she's wrong about something, call her on it. I think you'll find she has a point more often than not. Certainly, Molly has been critical of those on the right wing of the politcal spectrum, but there is a difference between criticism and "bashing". So far, I've not seen Molly cross that line, except possibly in jest. Open your mind a little, and you may be suprised at what you find.

Molly and George sittin' in a tree (bush actually)

I love Molly Ivins and thoroughly enjoyed hearing her narrate this book. She gets right to the core of the issues quickly, but makes her points through human-interest stories rather than invective. This gives the book a pleasant conversational tone that stands in stark contrast to the serious problems she's discussing. Her analysis of Dubya as a smart guy who knows exactly what he is doing is chilling. Her conclusions about big money politics and the need for campaign finance reform give anyone interested in change a roadmap to follow. Don't just listen to this book. Go out and do something about it.

Molly Ivins has crafted a well-documented review of the Bush presidency. It is colorful, humorous, and quite political. If you are tired and burnt out by political wrangling and politics in general, this is a book to avoid. It is, however, quite engaging as far as political writing goes. It is not the biting satire of Al Franken nor the political jingoism of Ann Coulter. It is critical of Bush, but on the other hand, it is not mean spirited, unless you believe that being critical is mean. This is not a book for Bush fans, but rather for independents and for those who have already decided they have problems with Bush. Ivins is not overly critical of conservative thought itself, but is quite critical of Bush. After all, not all conservatives support all of Bush's policies or the man himself. As an independent, I found the book interesting reading.

This book seems targeted to women. It is not angry, but often funny and well thought out. Ignore the negative reviews as they likely have not even bothered to read the book. The Bush/Enron ties are especially spooky.

Excellent read! If you find that today's America, as run by "President" Bush, is not the place for you, then Ms. Ivins' and Mr. DuBose's read gives a full account as to why. In this book, you will learn why anti-americanism has become chic, why we are better off with a weak military in an otherwise peacful world, and why turning over our national security to our friends such as Syria, China, and France in the United Nations is in our best security interest. The authors clearly present why "President" Bush has hurt this nation's chances to become part of the global govenmewnt by dissolving our own soverignity.

I'm an avid reader of political books and this has to be the worst one I've ever read. You quickly get the feeling she has a personal vendetta against Bush and no substance to back up any of the claims she makes. Unfortunately, not even an entertaining read. I strongly would discourage this book...seems merely like Democratic propoganda.

mindless dribble that should be placed in the fiction category. if there where no stars as a rating that would be my choice.

The blurb makes the author sound like she's an expert on President Bush. This couldn't be farther from the truth. Molly Ivans has bashed anything and everything to do with conservatives for decades in her local opinion column. So if you want a skewed leftist view, this is the book for you.