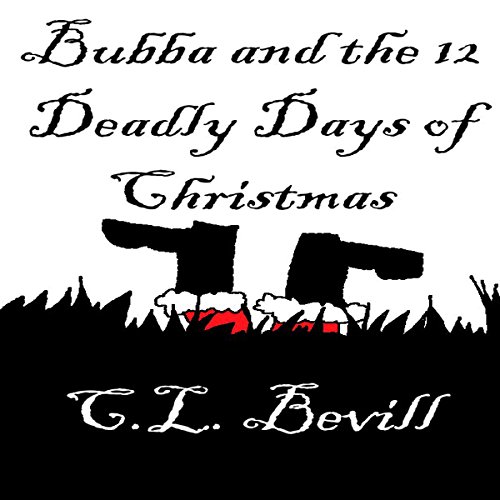 Bubba and the 12 Deadly Days of Christmas

Bubba Snoddy's got some problems. His family has descended for the Christmas holidays and not in a good way. His cousin wants to own the Snoddy Mansion, decrepit, falling down columns, termites, wood rot and all and isn't above using manipulative behavior to achieve his ends. Miz Demetrice is up to nefarious and illegal activities while trying to entertain relatives. His cousin's 10-year-old son is the personification of a demon and has hobbies of looking at medical photographs, making stun guns from scratch, and causing havoc wherever he roams.

The woman of Bubba's dreams, Deputy Willodean Gray, is still evading his romantic pursuits. Patients from the local mental institute are wandering over the town, ostensibly assisting with the Christmas Festival thanks to a program established by the mayor to cut costs. And Bubba has just found the dead body of a man dressed as Santa in the Christmas scene at City Hall.

Oh, Pegramville, Texas is just the best place to be at Christmas if a fella has a bullet proof vest and a linebacker's helmet. All the folks think Bubba might have done did it again, even though it was proven that he didn't done did it the first time, and Bubba has to move quickly in order to catch a murderer.

Bubba is back in a new adventure/mystery. With the help of his mother Miz Demetrice, Deputy Willodean Gray and his nephew Brownie, Bubba sets out to find a killer striking during the Christmas holiday. Hilarity ensues as Bubba is once again a suspect for a crime he didn't commit. Will Bubba find the killer before he ends up back in jail? Only time will tell.

This is another great story in the Bubba mystery series and Michael Gilboe is delightful as Bubba and the other cast of characters in this book. I would recommend this book to anyone who enjoys a great southern cozy mystery.

This book was provided by the author, narrator and/or rights holder, from audiobook blast dot com, in exchange for an honest review.

poor bubba in it again. loved Brownie loved precious and loved the whole story. can't wait to read the next one!

Having been raised in a small Texas town, this book takes me back to my childhood. The colloquialisms, the attitudes, the small town past times are all right on. The characters are entertaining and, in their own ways, noble. The mystery is pretty challenging as well. Great read all around.

bubba stories are fun, but not very hard to guess as mysteries. the characters and odd similies. carry the fun

Bubba and the 12 days

This was a laugh out loud fun book.Michael Gilboe was perfect as the narrator.Bubba Snoddy has relatives that show up for the holidays.Some steal silverware and someone is committing murders that Bubba keeps getting blamed for! Can he figure it out and evict his family?Oh and Jesus Christ is a blast...read it!“I was voluntarily provided this free review copy audiobook by the author, narrator, or publisher

I liked the second book in the Bubba Snoddy series much better than the first. I think the reason for this was twofold. First is this book has much more going on, the bodies keep and the intrigue keeps building. The second is that I listened to this as an audio book which I find much better when authors tries to write as people talk (think “what cha doin’ boy”). Hearing the characters in this manner is much better than trying to read it, in my opinion. Like the first book I wish there were more vivid details and descriptions to make the reader feel as if they were there but overall the home spun tale got me in the holiday spirit.

The narrator did a good job with the southern sounds and making Bubba really feel like a good old boy.

Still loving Bubba. The cast of characters are a hoot. I hope the rest of the books are released on Audible. I think the narrator does an excellent job. I received this audiobook for free through Audiobook Boom for my unbiased review.

Loved this story. Bubba saves the day yet again. Waiting on the next installment....will the boy get his girl?

great book series....start with bubba and the dead woman and I guarantee that you will not want it to end. and I can't wait to hear the next in the series!

This was an enjoyable listen. A little humor, murder and burgeoning love all tied up with an old ribbon and lit up with a stun gun. The narrator, Michael Gilboe, did an excellent job bringing the characters to life with his distinctive 'southern twang'. Though this one is suppose to be the first in the series, there is definitely a back story in another book somewhere that I wish I had read first. This one ends in a cliff hanger, merry Christmas.

"This audio book was provided by the author, narrator, or publisher at no cost in exchange for an unbiased review courtesy of Audiobookboom"