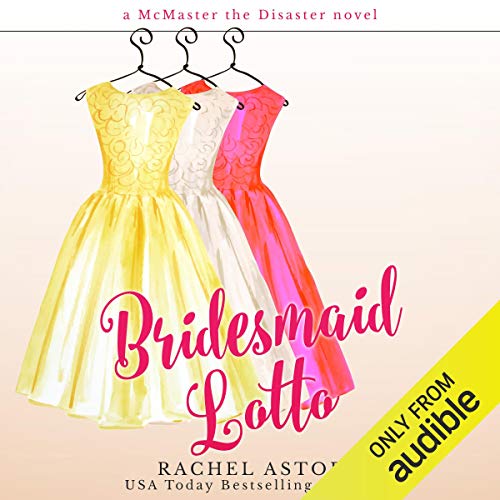 By: Rachel Astor
Narrated by: Angele Masters
Try for $0.00

Book one in the USA Today best-selling McMaster the Disaster series.

Josephine McMaster is pretty and smart, but very much a klutzy mess. Finally, at 26, she may have actually lost the dreaded 'McMaster the Disaster' nickname that has followed her around her whole life.

Josie's quite content to be single, much to her mother's disappointment. So when a bizarre contest is announced where a socialite is holding a lottery to pick her bridesmaids (and rake in a little extra cash), she can't roll her eyes fast enough, even if it does mean meeting Jake Hall, her one and only movie star crush. Obviously, Josie doesn't enter the bridesmaid lottery, so you can imagine her surprise when her picture pops up among the winners, thanks to Mom. With a little prodding - okay bribing - Josie agrees to participate.

The wedding turns into the event of the year, and Josie finds herself in the middle of a paparazzi feeding frenzy, which gets even crazier after Jake Hall takes a special interest in her. Can Josie handle the pressure in the spotlight? Is it possible she might really have a chance with Jake Hall? And if she's busy worrying about all that, how in the heck is she going to keep 'McMaster the Disaster' from showing up in front of the entire world?

What listeners say about Bridesmaid Lotto

Unfinished ending ticked me off. - *Spoiler*

Yet another author who robs their readers of an actual ending in a lame attempt to get them to seek out the next book in the series for an answer to something they should have finished in the first book. I HATE when writers do this. If you're characters are not strong enough to keep people engaged in the story and wanting to read more then this type of ending isn't going to do anything but tick them off and make sure they never buy another book written by you in the future as well as spreading the word that you do this. It's a cheat.

I listened to this book and enjoyed it for the most part. The main heroine is handed a envelope containing a name of someone she's going to be working for in her new job and told not to open it until she's on the plane to her new destination. The story kept making broad hints at who her new boss is with everyone asking her who it is and her replying she didn't know because it was "top secret". Then she's at the airport with envelope in hand, still sealed, boarding the plane looking forward to opening it. THE END.

YUP, that was the end of the book. Now here is where you can imagine the writer/creator of this story as she finishes typing this ending with a smug smile thinking to herself "this will get them to buy the next book." WRONG. This will just make your readers angry enough to boycott any future books you may write. If you like being strung along with empty promises then left hanging...go ahead and give this story a read. Otherwise, avoid this writer who just handed her readers the equivelant of a peanut can with spring snakes sealed inside waiting to pop out when you open it. Trust me, it's JUST as annoying.

A cliche and a stereotype walked into a bar. . .

. . . after too many shots of tequila, this story walked out.

The story had a decent premise, but poor execution. Too many of the characters were cliches on steroids: The self-centered, over-bearing mother; the gay best friend; the back-stabbing pseudo-best friend; the country bumpkin out of her element; the bitchy, narcissistic model; the world-famous but oddly humble and down-to-earth movie star. . . It was like a clown car of cliches - they just kept pouring out.
There was so much glossed-over in the book: The socialite does a bridesmaid lotto for a publicity stunt. . . that's all there is to that story. There is no relationship or communication between the bride and her bridesmaids - no connection formed, one conversation between Josie and the bride about the bachelorette party, but they don't even talk during that weekend. An alleged rivalry between Josie and Rebecca is implied, but nothing comes of it. Jake falls for Josie with no explanation, no conversation. They share a laugh at the engagement dinner, but that's it.
Anyway, there's just no substance to this story, and nothing happens that makes it remotely believable. The most convincing relationship in the whole story is between Josie and Jennifer.
Then, the story ends with the cliffhanger of Josie flying off to London. If I had known this was not a complete story, I would not have wasted my time on it.

As far as the narration goes, I have listened to 100's of audio books as I drive all day every day. With the exception of author-narrated stories (the ones where there are long periods of dead air and you can hear them taking drinks of water) this is one of the worst I've heard. While I prefer dual narration, there are a few female narrators out there who do an excellent job at male voices: Andi Arndt and Xe Sands leap to mind. Angele Masters' male voices were atrocious. They either sounded like big dumb jocks, total creepers, or straight-guys mockingly imitating a gay man speaking. Honestly, her male voices were borderline offensive. I would go out of my way to avoid listening to another story narrated by her.

Save your money, credits and time. This one is not worth it.

This is a fun, light romance, good for a summer read. However, there are 2 more books one must read to finish the storyline.

My biggest complaint is that this author consistently uses "I" and "Me" incorrectly. What? Was there no proofreading? Are there no longer editors in the publishing world? It wasn't just once or twice but MANY, MANY TIMES throughout the book. It was so bad that I almost didn't finish and am seriously thinking about writing the author a letter to suggest she repeat some high school english classes. Or she may be young enough that she went through our current public schools that are more concerned with political indoctrination than teaching the basic "Three Rs".

This book was the prize. Fun, funny and thoroughly entertaining this crazy romp was a delightful escape!
With witty banter, imaginative frolic and excellent narration.

I can't believe I binged this series without leaving a review! I've read and listened to the series multiple times, as a "master the disaster" of fact. I love it! It's my go to contemporary series. Nice, clean, and funny. PLEEEEESE check it out!

It's a tough one

I like the story, I have the series on my Kindle but it's the narration that's making me not wanting to listen to this. Especially the way the narrator does Mattie's voice. It's like nails on a chalk board for me. She is just too extra with him and not in a good way. I know some gay men and they don't really speak like that, not even the "fabulous" ones. Where the heck was the director for this? They needed to do better job with the narration. As for the story itself, I really do like it and read all the ones in this series so I was looking forward to the audiobooks so it is a bit disappointing.

There were so many times that I wanted to reach through the book and strangle the main character. She acted like such a teenager, juvenile bantering, not telling her mother she was no longer 15, and many other things. There was very little romance, like only about 6 kisses and... well that's about the extent of the romance portion. Now, the major thing that I couldn't stand is the amount of "...she said" "He said..." "...I said" "She said..." "I said...". It really got to the point to where I was constantly pointing them out to myself. Narrator was very good and talented with her separate voices per character.

This story was fine. The narration made me feel like the characters were even younger.
The relationships felt very young too.
There is a cliffhanger. I wouldn’t bother if you aren’t getting it through Audible Escape.

I read this book quite a while ago and was thrilled to see that it is out in audio form. The narrator was wonderful and I thoroughly enjoyed listening to it! One of my favorite books/series!!!

Cute concept, but the protagonist's self-doubt, cynicism, mother issues, jealous roommate, gay best friend-cum-stylist, etc. were all a bit cliché for my taste. Plus, the narrating left something to be desired.