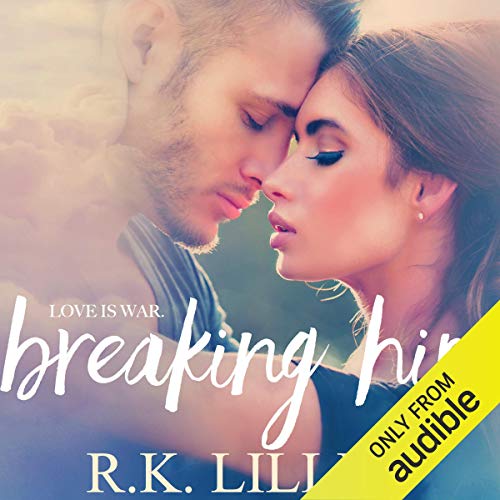 By: R.K. Lilley
Narrated by: Sarah Naughton
Free with a 30-day trial

From internationally best-selling author R.K. Lilley comes a scorching new series with searing tension and all-consuming angst. It's love, it's war and it's Scarlett and Dante's story.

It was the kind of relationship where I invested more than I had to spare.

I gave it everything.

And so when it failed, I lost myself.

I went down with the ship.

My soul, burnt embers in the aftermath.

The fire of him ravaged it all.

Scarlett had always dreamed big. She was headed straight for Hollywood. Destined for silver screen greatness.

But in her wildest dreams she never imagined she'd be broke and single at 28, doling drinks at 35000 feet.

She was a glorified waitress in the skies.

It had been years since she'd seen him.

But one day, there he sat, gazing intently at her, ready to set everything ablaze once more.

Sure, she'd play along...but this time, it was his turn.

She was breaking him.

After all, love is war.

What listeners say about Breaking Him

What can I say about Dante and Scarlett? These two had explosive chemistry and their banter was knife sharp. There is a thin line between love and hate and these two just don't cross that line, they do the Cha-Cha all over that sucker. You know what they say about a woman scorned don't you? Scarlett revels in her role as the scorned woman. As a matter of fact, she turns it into an art form.

Be warned, there is plenty of angst, dirty sex, reprehensible villains and a cliffhanger that will make you angry enough to hunt down R.K. Lilley and demand that she finish Book 2 yesterday (sleep be dammed).

Loved This Story but another MF Cliffhanger

I really did not want to get the book becaus book two was not out and I'm already waiting on another 2nd book from RK and have been waiting too too long. I hate unfinished series but it is a good book. The only reason I gave it 4 stars is because book 2 is nowhere in site

Gah! LOVE this! Cliffhanger, 2nd book not out yet

YES! Because the chemistry and connection between the two characters is ... is ... steamy. Undeniable. It's the exact sort of connection that I'm looking for when I listen to books like these.

I don't have a favorite, I love both Dante and Scarlett! I might side a bit more with Dante in this book though just because Scarlett was so mean to him. But we don't know the whole story due to this book ending with a cliffhanger, so maybe he deserves it.

Everything. She played the parts well. Sometimes with audiobooks, it's almost like the narrator is just reading. But with Sarah's performance, her portrayal of the characters was believable.

I don't want to spoil anything so I'll be vague. Dante's reaction every time Tiffany enters a scene between Dante & Scarlett. His loyalty to Scarlett in these situations (even if it may have faltered in the past as is hinted but we never really know what happened due to the cliffhanger). I think that's what really grabbed me in this story.

The people who say this book is just full of childish behavior and Scarlett is mean or a brat who Dante repeatedly saves even though she doesn't deserve it ... well, I completely disagree. There's obviously more to their story. Although I found the past/present back and forth a bit annoying because I wanted to hear the present more than the past, we NEED to hear the past to understand the depth of their relationship, their connection, to understand why they will always go back to each other no matter how much they hurt each other. They are each other's home. And I think that the 2nd book will show us exactly why and it'll all make sense. I love R.K. Lilley's books, she has a way of building connections that I can't find in many other series like these. Bottom line, have faith in R.K. Lilley with the 2nd book. She won't let us down. I just hope it comes out soon because the suspense is killing me. This story really squeezed my heart, I couldn't stop listening to it and CANT. WAIT. FOR. MORE. I neeeeeeed more.

What made the experience of listening to Breaking Him the most enjoyable?

All of it. The narration, characters and the strong writing. Not the same old story line.

She did it perfectly.

OH, I did. Could not stop listening.

Well worth you credit.

I and a huge fam of R.K Lilly everything she put put never disappoints. trust me it's a good one

going to have to get the next one

If you could sum up Breaking Him in three words, what would they be?

What was one of the most memorable moments of Breaking Him?

I guess all the crazy drama and sex....and they're out of control love/hate relationship

Which character – as performed by Sarah Naughton – was your favorite?

Scarlett. Even though she can get on my nerves, she's spunky & I like that about her

There were several. Not sure i'd use the word "moved" but the book was pretty intense

Good narration and listening content but it begins with the end, then ends with the middle and leaves ALOT of "huh?" Moments. So be prepare for that.

What was the point of it all? Too much inner dialogue. She goes on and on about how much she hates him but sleeps with him nonetheless. Just urgh shut up about it. This book sets you up for the next one since it doesn’t have a conclusion.
Overall the story drags on. The female protagonist in it doesn’t have any redeeming qualities about her. It was painful for me to listen to the whole thing (because on principal I need to finish once I’ve started).

It's been several years since I've read anything by R.K. Lilley. It wasn't on purpose....just an out of control TBR list. I feel I must apologize to her now because I forgot what a fantastic writer she is. I switched between reading and listening to the audiobook (the narrator was fantastic). Normally I get annoyed with angst filled love stories, but this was perfect. And even though it ends with a cliffhanger, I'm grateful I don't have to wait for the conclusion because I'm starting Breaking Her RIGHT NOW!!!

Wish I Liked It More

An interesting premise. Slow moving at times. Though I'm a fan of the author, this series wasn't for me but it was ok. The quality narration worked in its favor.

Frustrating Yet I Love It!

ok based from the title you already know that this book is frustrating & you can't help but listen to the story cos it's that good.

I seriously can't wait for book 2, it left me/us hanging & after listing to the preview at the end it made me crazy from wanting to know more.
So I did some research on book 2 at goodreads "OMG" not even a short summary of the upcoming book or books. But if you scroll down, there is some short teaser.

This story is seriously awesome yet it is killing me!! ugghh!! Listen to the the book if you want to know what I am talking about. It was totally worth buying this book.

Not forgetting, the narrator she did a splendid job, cos I was hook from the very beginning.