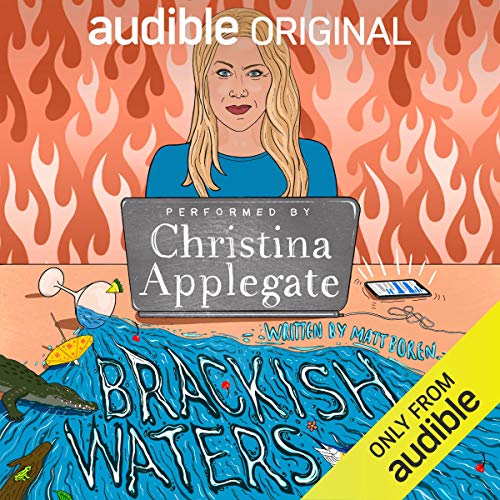 By: Matt Boren
Narrated by: Christina Applegate
Try for $0.00

Watch the trailer for Brackish Waters

Writer/actor Matt Boren is a graduate of NYU’s Tisch School of The Arts. He got his start writing story arcs for All My Children then went on to sell his first pilot, Dirtbags, to Fox. That pilot was greenlit and thus began Boren’s career in television. He has gone on to sell shows to NBC, ABC, FX, E!, Disney Channel, and Nickelodeon. Boren has written on over 80 episodes of television including Melissa and Joey, See Dad Run, and Sofia the First. Boren has acted in many projects in both film and television including the lead role in the Sundance darling, Momma’s Man, Amazon Prime’s The Booth at the End, and for nine seasons as Stuart on How I Met Your Mother.
Boren’s first novel, Folded Notes from High School, was released in April 2018 (Razorbill). The audiobook version—starring Christina Applegate, Ramy Youssef, Taylor Spreitler, Ryan Newman, Selma Blair, Meredith Salenger, and Katie Lowes—was chosen as one of the most "Amazing Audiobooks" of the year by the Young Adult Library Services Association (YALSA). Boren wrote an Audible Original comedy, Tinaca Jones, starring Retta with appearances by Boren and Stephanie Lemelin.
Humorous
Show more Show less

Christina Applegate has endeared herself to audiences and received accolades for her strength and versatility in theater, film, and television.
Applegate currently stars in and is executive producer of Dead to Me, which premiered in May 2019 on Netflix, for which she has received Best Actress nominations from the Emmy Awards, Golden Globes, Screen Actors Guild (SAG), Critics Choice, Television Critics Association, Gold Derby, and People’s Choice Awards, among others.
On the big screen, her credits include Bad Moms, Anchorman, The Sweetest Thing, Wonderland, View From the Top, and the cult classic Don’t Tell Mom the Babysitter’s Dead. Applegate has also found a niche in lending her voice to animated features. Her credits include three Alvin and the Chipmunks films, Cats & Dogs 2, The Book of Life, and Farce of the Penguins.
She first gained widespread attention as the sexy and sarcastic Kelly Bundy on the long-running series Married with Children. She then starred in her own NBC comedy series, Jesse. The highly rated show garnered her a People’s Choice Award and a Golden Globe nomination.
In 2004, Applegate earned an Emmy Award as a guest star on Friends and was nominated for another Emmy the following year. Her performance in the ABC series Samantha Who? was applauded by critics and fans and brought Applegate her third SAG Award nomination. She was also a producer for the show, which won a People’s Choice Award for Favorite New TV Comedy. Previous nods include nominations for two Emmys, two Golden Globes, two SAG Awards, a Satellite Award, and a Prism Award.
In 2005, Applegate made her Broadway debut in Sweet Charity. For this starring role, she was nominated for a Tony Award and a Drama Desk Award. Her other stage credits include John Cassavetes’s Los Angeles production of The Third Day with Gena Rowlands, The Axeman’s Jazz, Nobody Leaves Empty Handed, The Run-Through, and The Grass Harp.

What listeners say about Brackish Waters

Christina Applegate is everything

This was entertaining and funny, though very unlikely. Christina Applegate totally knocks it out of the park with her performance in this reading. However, Matt’s perception of a woman trapped in adolescent angst while in mid life is unlikely and makes me think he needs to spend some time with some real grown women. I haven’t met a women in her forties so devoid of personal development as described in this book.

I am loving your acting now and your show on Netflix I’m getting old lol 😂 I can’t remember the name
and now this is so great listening
also I can leave you a message and tell you one thing
You are one of the good ones .. wild fun I already have audible and this just let me hit play .. hope you are well sending you love and light ..♥️💫🙏🏼 Debi always

This is utterly delightful.

As a fan of the Small Town Murder podcast, “Brackish Waters” reminds me of the best one-star citizen’s review. That initial geeky excitement never abated; I was pleased as punch throughout the whole audiobook.

Christina Applegate is an amazing narrator, who brings so much sarcasm, life, and snide humor to the story. I could picture myself there with her, giggle-snorting at her wit and just as disgusted by the comedic disappointment which is the resort and her trip and her life. There's also awe at the heart of this coming-of-middle-age story; I was left hopeful and fulfilled.

I enjoyed listening to this so much, I texted all my friends telling them about it!

Well done. Do love Christina Applegate’s voice. Could totally picture her in the lead role if this every became a movie.

I think this must have been written for Christina Applegate! She was perfect in her narration and inflection and the story was perfect for her snarky characters. I totally enjoyed this story and only wish it could have been longer without messing up the story line. I hope to hear more from the Boren/Applegate combination.

But can this be turned into a movie?!

I was literally imagining all of this on my head as it was being read. Someone make this a movie!! And Mrs. Applegate must be the main actress.

This book had me laughing and ringing over the REAL-ness. Christina Applegate’s performance was spot on. This could easily be a great Netflix movie.

Not always easy to achieve in a balanced coming of middle age story.
Having a rebirth from a $20.00 auction item proved to be more valuable than the vacation prize.
I look forward to listening to Brackish Waters again!

A fine and funny listen

Laugh out loud funny. I was surprised by the excellent writing and ear-catching turns of phrse.

started very well, funny, entertaining, but dragged out too long (no reflection on Christine Applegate)