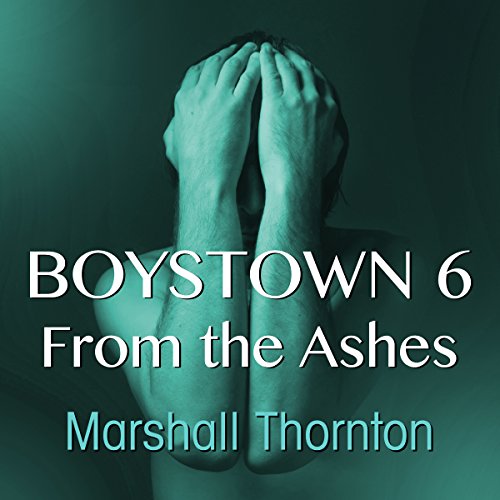 Boystown 6: From The Ashes

By: Marshall Thornton
Narrated by: Brad Langer
Try for $0.00

The most unlikely person in the world asks Private Investigator Nick Nowak to investigate the un-suspicious death of a priest. It's winter 1984, Private Investigator Nick Nowak has allowed his life to fall to pieces: he's stopped taking cases, lost his apartment and works as a bartender at a sleazy bar tucked under the El. All he wants to do is lick his wounds after the death of his lover, Detective Bert Harker. But, when the least likely person in the world shows up and asks him to take a new case he finds himself investigating the very un-suspicious heart attack death of a priest. Nick is convinced he's wasting his time until the clues begin to add up to.

What listeners say about Boystown 6: From The Ashes

Great depth of character and twisty plot.
Love this series and wish the remaining were audiobooks too.

Start at the Begining of the Series

When I first got this book, I didn't realize that it was part of a series. I know the #6 should have tipped me off, right? So, I stopped listening and went to get the 1st Book: Boystown. By the time I got to the 5th book: Murder Book, I was well past being fully invested.

I feel like I enter into a time warp every time I listen to one of the NIck Nowak novels. The whole series is based in the '80s. Nick is the main character, in his early 30's, and truthfully he's kind of an a$$hole, but the more you listen/read the more you start to like him. You have to understand he's very good at what he does. He drinks, smokes and fu#%$ to escape his problems just like everyone else did in the '80s, and he seems to have more problems than most.

After Book 5: Murder Book, I didn't have a clue how the author would be able to continue on with the series. All of Nick's cases and personal turmoils were wrapped up with a nice neat bow, yet somehow, Marshall Thornton managed to pull it off.

I've listened to Brad Langer narrate other books and he always does a spectacular job. In this series, he really makes you believe that he truly is Nick Nowak Private Detective. I would definitely recommend this whole series, but to start from the beginning. It's worth it!

First time author for me and I honestly fell into this audiobook it has so much that was endearing to me .
Great storyline & very interesting now I need to read / listen to previous books.
I was given this audiobook free which I very much appreciate..
Brilliant words by Marshall Thornton with beautiful narration by Brad Langer.

whole series is great, but this one's my favorite

The Boystown series is more than a mystery series. The author does an amazing job of capturing a time and a place. Amazing narration too. This one has a special place in my heart because of Nick's first encounters with Terry and Father Joseph, two of my favorite characters.

I received a free review copy from the author but a review was not required.

I don't know if it's just me, but as soon as I start listening to any of this series I start smiling and thinking of past characters and I know I'm in for another good time and great listen. So many revelations!!! I loved seeing Mrs. Harker slowly changing towards Nick. Tears, laughs, and intrigue. More please. I voluntarily listened to a free copy of this story and am giving an honest review. The narrator's voice and expressions brought it all to life.

If you enjoy a plot-driven story and an admirable protagonist then this series is for you. I hope someday to read more like this. Good job!!!!

If you could sum up Boystown 6: From The Ashes in three words, what would they be?

Marshall Thornton and Brad Langer at their best. Nick Nowak is a wonderful character and I love hearing about his daily interactions and mishaps.

Have you listened to any of Brad Langer’s other performances before? How does this one compare?

He's actually so well suited for Nick Nowak. I haven't listened too much to other stories. I've tried but its more I didn't like the other stories enough to purchase the audio.

I'm afraid I get this series mixed up (as I'm on the last book) - but each of the series is great. I've enjoyed every one of them.

What other book might you compare Boystown 6: From The Ashes to and why?

Marshall Thornton's Boystown novels are all noir, much like Lee James' "Errors and Omissions."

Which character – as performed by Brad Langer – was your favorite?

Who was the most memorable character of Boystown 6: From The Ashes and why?

Nick Nowak. Believe I covered the "why" above.

Listen to all six novels in the Boystown series.

The concept is interesting and well written. The characters are likeable and the narration is good.

Boystown 5 shattered my heart but at the same time gave me the vengeance I needed. Boystown 6 was the first step towards healing and moving on. It’s been a year since Bert Harker died, and Nick’s not doing well—he’s shut himself out from the rest of the world and just does enough to simply exist and survive. When Bert’s mother, Mrs. Harker, contacts Nick for help, it’s the turning point Nick needs to start living again. Like the previous five books in this series there is action, mystery, and a lot of steamy, sex. There is also a lot of emotional moments that are full of tenderness and bittersweet pain. My heart at times both ached and rejoiced. This series has seriously become one of my favorites – I love everything from the historical setting of 1980s Chicago to the gruff and rough edges of Nick Nowack and the intriguing mysteries he ends up solving.

Set in 1984 this thriller stars Nick Nowak. Bartender and one time detective. Investigating the suspected heart attack of a local Chicago priest. Well written and narrated this book moves fast to raise all the required questions and answer them. It’s not a light hearted book but the plot is complex and satisfying.

This is a first time author and I was absolutely drawn into this book.
I was given this audiobook free and I so much appreciate this act of kindness.
Great audiobook with a good story line that is easily followed.
Great words by Marshall Thornton with a beautiful narration byBrad Langer..

I've binged listen to all 6 books so far.
Nick Nowak PI, set in Chicago in the 1980s, these books follow his PI case files and his love life. There are a lot of sad bits, but there's something about them that keep you hooked. A great read.