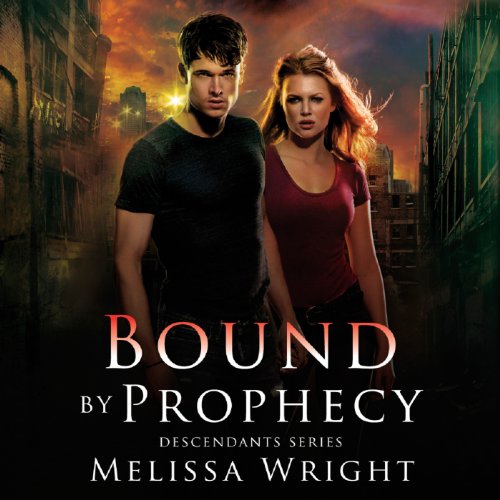 Twenty-two-year-old Aern is done watching his brother destroy the only thing that matters. He never wanted to take Morgan's place among council, never wanted to rule their hidden world. But when the key to the prophecy is found, a young girl named Brianna whom Morgan will destroy, Aern knows he has to take action. What he really wants is for things to go back to normal. But now he's kidnapped a girl, and his brother's men are after him.

His only hope is to join with the Division, but they have plans of their own, and it's the last thing Aern is willing to do. Emily just wants her sister back. She doesn't care about the prophecy, or know what's at stake. But when she goes after Aern, the truth of the matter uncoils, and Brianna isn't the only one who's in danger. Suddenly, they're at the center of a secret war, and unless they can work together, they'll both have a sacrifice too big to make.

Such a twist and AMAZING reveals!!

If you could sum up Bound by Prophecy in three words, what would they be?

I liked that you weren't able to figure things out until the author wanted you to...

Have you listened to any of Kirby Heyborne’s other performances before? How does this one compare?

I loved being able to deliver pizzas and listen to Bound By Prophecy. This was the first time I had listened to an audiobook narrated by Kirby.... I thought at the beginning that Kirby was kinda mono-toned... but around chapter three or so, he really picked up and did a GREAT job!

When you find out that Emily was the Chosen one for real and that their mother had set in motion such an elaborate plan!

okay, so while this book was a slow burner.... and it took me a while to get the story to make me enthralled.... after about 15% through it happened.... that pivotal moment where **GASP** and all of a sudden I am LIVING THIS BOOK!! Well, it happened...!! Learning about this amazing world that Melissa Wright has put us all into was AMAZING!! Aern was a bit plain and cut straight a bit too much for me at the beginning but I quickly began liking his story more and more.... and then had to RE-read the fact that he has DRAGONblood?? WOW!! Loved this story and hope to be able to fit book two in the descendants series in my reading schedule asap!!
I give this book 5 out of 5 shields!!

I enjoyed this book. Heyborne is a good narrator. He does a decent female voice but the story would have really popped if this had been a dual narration. Worth a credit

This is the first book that I have listened/read by author Melissa Wright and narrated by Kirby Heyborne. This is the first book in the Decendants Series. Aern’s job is to protect the chosen ones, but since she is the key to the prophecy, everyone wants her. This book is an intense book that will wanting you to keep on listening to it until the end.

The narrator Kirby Heyborne, did a great job, and was very easy to listen too. This is the first time I have listened to this narrator, and I am looking forward to listening to more books by him. If you are looking for a great fantasy/paranormal book, then you need to get this book!