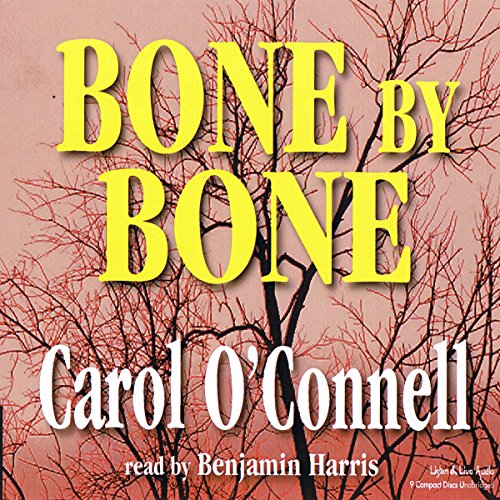 By: Carol O'Connell
Narrated by: Benjamin Harris
Try for $0.00

In the northern California town of Coventry, two teenage brothers go into the woods one day, but only one comes back. No one knows what happened to the younger brother, Josh, until 20 years later, when the older brother, Oren, now an ex-investigator for the Army CID, returns to Coventry for the first time in many years. His first morning back, he hears a thump on the front porch. Lying in front of the door is a human jawbone, the teeth still intact. And it is not the first such object, his father tells him. Other remains have been left these as well. Josh is coming home...bone by bone.

Using all of his investigative skills, Oren sets out to solve the mystery of his brother's murder, but Coventry is a town full of secrets and secret-keepers; the housekeeper with the fugitive past, the deputy with an old grudge, the reclusive ex-cop from LA, the woman with the title of town monster and, not least of all, Oren himself.

But the greatest secret of all belonged to his brother, and it is only by unraveling it that Oren can begin to discover the truth that has haunted them all for 20 years.

What listeners say about Bone by Bone

I'm a fan of Carol O'Connell - she has a way with language that causes you to linger over certain lines and descriptions (obviously easier to do when reading than when listening). I've enjoyed most of her books and would put this one somewhere in the middle.

As one reviewer mentioned, there are a number of characters to keep up with, but over the course of the story, you get to know each one and it's not quite as difficult to remember who's who. She does a masterful job of leaving you in suspense - teasing you with the mystery of Josh's disappearance and Oren's possible connection to it. She answers each question in dribbles here and there so you want to keep listening. Some aspects of the story were hard to swallow - Oren's strange relationship with Isabel, for one, though I was willing to overlook that since the novel, as a whole, was solid. One reviewer mentioned how the townspeople were completely fine with breaking the law - I actually found that somewhat believable since this attitude seemed in keeping with the crazy people of Coventry.

I wasn't a fan of the narrator - there were a number of times when the point of view switched and a new scene was obviously in play (though not necessarily a new chapter), but the narrator didn't pause to let you know that. It made for some confusing moments.

Overall, this is a good listen, though you do have to suspend your belief at times. You also have to pay close attention - it's easy to miss some of the details.

I have to say that the reviews here all have valid points but I still very much enjoyed the book. I think the suspension of belief is a key element to enjoying it because there are definitely some scenes that are a little hard to swallow. The pace of the book is slow, but not in a bad way. There are many metaphors in the book that support the slowness; the fact that no one drives over 15 miles per hour in Coventry, how the bones appeared one by one over a period of months, how the judge kept the house exactly the same as the day Josh disappeared. Coventry has no cell towers and gets no cell reception. It's like Coventry is suspended in a time when life did not move as quickly as it does now and I did not think it was a bad thing.

I think O'Connell did a masterful job of weaving this complex story together and wrapped it up well at the end. Oren and Isabel's relationship is implausible, but it was a powerful story line even though they only exchanged about ten words. It takes some talent to write a story where the two main characters never speak but still have such a complex relationship.

I agree that the narrator had some issues. I especially disagreed with his portrayal of the CBI agent Sally. She sounded creepy and mildly insane but we are supposed to like her in the end! It did not happen for me.

I think it was definitely worth the money and I recommend it. Happy "reading"!

This is a delightful book with the best combination of mystery, humor, pathos, great characters and well written prose. I've actually listened to it twice, and enjoyed it even more the second time around. Carol O'Connell is now on my favorite authors list.

For her next audiobook, I think the author could choose a better narrator. This one was a cross between Mr. Howell on Gilligan's Island, Barny Fyffe on the Andy Griffith Show, and the church lady from SNL. Not only that, but the plot is dumb. The main character was supposed to be an ex-CID man from the Army, but he sounded not only by the narrator, but by the author, to be in high school. There was no credibility. I will probably not waste my money on another book by this author.

This story stayed on one note - never changed. I was waiting for the suspense or anything that changed the slow pace of this story. There were so many characters that in the early parts of the book I was confused by who was who. I liked the narrator, he was good at making different types of voices that were interesting. I figured out the ending really early on. All in all I found this story boring, but gave me something to listen to on my commute.

I could not wait for this to end. I story seemed to drag on and on and on. I listen to a lot of books. This one just didn't click for me.

I found this to be an unexpected enjoyment. I found the writer both refreshing and captivating with description of characters and events.

I'm glad I didn't listen to the bad reviews. Yes this is a mystery, but its also a story about different people and relationships, and it is very interesting.

I rarely submit reviews, and recently realized how much I depended on them to make my own choices. So....I think this book is Carol O'Connell's best, and the narration completely lives up to that. Listen and enjoy!

Don't know if it's the book or the narrator, or both, but what a bore. I have long been a mystery fan and have read hundreds over the years. This one just doesn't get it. The reader is a drone. The writing is hackneyed. The suspense is non-existant. Don't bother.