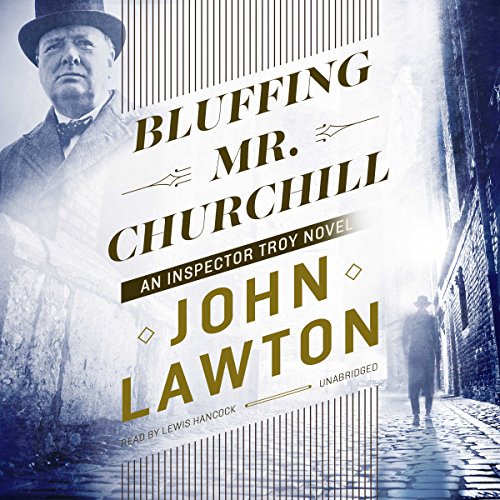 It is 1941. Wolfgang Stahl, an American spy operating undercover as an SS officer, has just fled Germany with Hitler's henchmen on his trail. He is carrying valuable cargo - the blueprint of the Führer's secret plan to invade Russia. Stahl's man in the American embassy, the shy and sheltered Calvin M. Cormack, is teamed with a boisterous MI5 officer, Walter Stilton, to find the spy and bring him to safety.

Their investigation takes them across war-torn London, from the shelled-out blocks to the ubiquitous pubs to the underground counterfeiting shops; and in Cormack's case, into the arms of Kitty, his partner's rambunctious daughter. As Cormack and Stilton close in on Stahl, bodies begin turning up - and the duo realize they may not be the only ones in pursuit of the spy. Someone, it seems, wants the German dead.

When his partner is suddenly murdered in the line of duty, Cormack must turn to the ingenious devices of his lover Kitty's old flame - Sergeant Troy of Scotland Yard. Together, they investigate the trail of murders and are forced to ask themselves a horrifying question - are Cormack and his spy being played by one of their own in the American embassy?

Brilliantly re-creating London in the time of ration tickets and clothing coupons, Bluffing Mr. Churchill is a blistering book peopled by magnetic characters.

That sounds like a trite word for this book. When I first saw how long it was i didn’t expect to finish.
Hang in there. It is absolutely fascinating! I have listened to this all day long. I took it to lunch, it is getting late tonight And I just finished. It moved effortlessly from one situation to another always surprising. It’s many fully formed characters were ones that I cared about. Needless to say I am I the search for another book by this author and hopefully with the same superb narrator.

Of the 102 chapters in the book, one must wend their way through 100 chapters to meet the Mr. Churchill on the cover- reminding me of Melville.

The dialogue of some characters is punishing, and the character of Kitty is flat out a schoolboy fantasy.

But all in all,an interesting story despite the cavalcade of characters - tough too keep track of in an audio.

The most convoluted spy story I’ve ever read... and I LOVE spy, mystery & suspense. There was none in this book.

Gave up after several chapters. Tedious and increasingly irritating to try to get through. Somewhere deep down are the bones of a potentially good story. This isn’t it.

My first experience with this author. The story was captivating and the characterization was very good. Highly recommend it!

First time author for me. This book was a long and winding road. It meandered in the beginning before getting to the real story but it eventually got there and was pretty good. The historical perspective was interesting and it was the time in 1941 before the USA entered the war and the blitz was on. The Bismarck even sunk the HMS Hood during this book.

The best part of the book was listening to the different perspective; the Brits, the Americans, the Germans, the Russians, it was a big game of cat and mouse and this book brings that to life.

All in all it was an interesting listen.

Seriously, the makings of a great book but a weak ending, did i miss something?

This may be billed as an Inspector Troy novel, but Freddy Troy is not the main character, nor the pivot around which the plot revolves. And actually I quite like it this way. Lawton's characters are enthralling - well, to me at least - particularly new character Cal McCormack (an American) and return characters Walter Stilton and his daughter Kitty. And I am still more intrigued by Freddy's dad, Alexei Troy, than I am by Freddy himself. The plot is most definitely a good one, but it is Lawton's characters on the page that made me decour this book in 36 hours. That is highest recommendation that I can make.

I have been searching for another author of historical fiction and I have found him. The author weaves his tale through historical events with ease. Highly entertaining. This will not be the last novel by John Lawton that I read. I was pleasantly surprised to find that this is one I’ve several in a series. Lewis Hancock also did a fine job with the narration.

Side note…I now know what “bangers and mash” is.

I very much enjoyed listening to this audio book. Characters well developed; intriguing story line with many twists and turns. Kept me very entertained on a long road trip.