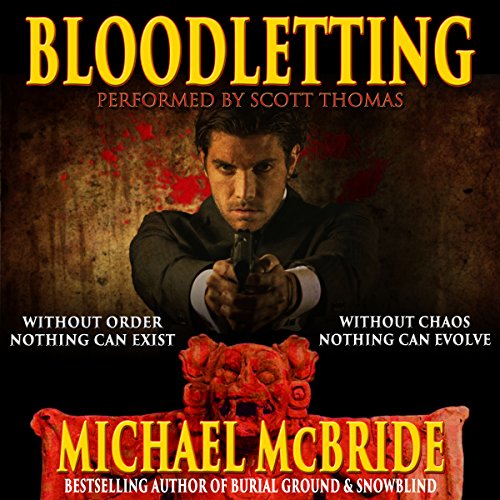 By: Michael McBride
Narrated by: Scott Thomas
Try for $0.00

The butchered remains of Jasmine Rivers are discovered in the cellar of an abandoned farmhouse on the desolate eastern plains of Colorado, the fourth mutilated body found in the last two months. The FBI is still searching for the missing parts of the previous three.

Hundreds of miles away in Arizona, 11 corpses are exhumed from the Sonoran Desert. They’ve been mummified and bundled in traditional Inca style. But the Inca lived in South America, and these bodies aren’t centuries old.

Seemingly unrelated victims that share a common cause of death: exsanguination.

Special Agent Paxton Carver follows the trail of blood, which leads him to the continuation of genetic experimentation that began during World War II and a designer retrovirus capable of altering human chromosomes. Can he track down the virus and prevent further exposure before the real bloodletting begins?

What listeners say about Bloodletting: A Thriller

Bloodletting is a great thriller

Bloodletting is an Audiobook available on Audible.com and Narrated by Scott Thomas. Scott does a great job with the Female voice and the male FBI agent in this story. The story itself is very intense involving multiple mutilated body's found in several states with no suspects.

Hundreds of miles away mummified remains are found and an anthropologist is taken from her dig in South America, by the FBI, to look at the remains. The anthropologist and the FBI Agent are old Friends and wonder why they are brought together for this case.

Plans for DNA manipulation going back to WWII and the Nazis comes to light and the mystery takes a sinister turn.

Bloodletting is a wild ride and worth listening to more than once.

This book was gifted to me for an honest review from a third party.

I loved the combo of Island of Dr. Moreau meets Mengele meets CRISPR science! Lots of excellent action as the protagonists try to solve the mystery of desiccated and exsanguinated bodies found in the desert. The path leads them deeper and deeper into a mystery where they must face the awful truth about their own genetic heritage as well as the ambitions of an evil scientist who wants to propel mankind's evolution down dark paths. I can't say any one character really stood out to me, which was the one weak area I found. It could just be me - if you love science-based thrillers, I highly recommend this one. I've enjoyed every Michael McBride book I've read or listened to, and I'll definitely be picking up more of his novels!

It did not grab me

I put a few hours into listening while being busy around the house and this did not catch me. If I have to write cheat sheets or flow charts to keep track of stuff, it is not for me. I did start from the beginning twice but...

I must admit this story took me a while to get into. But I'm so glad I kept going. What a great story. As usual Scott Thomas makes a story come alive. 5* xcx