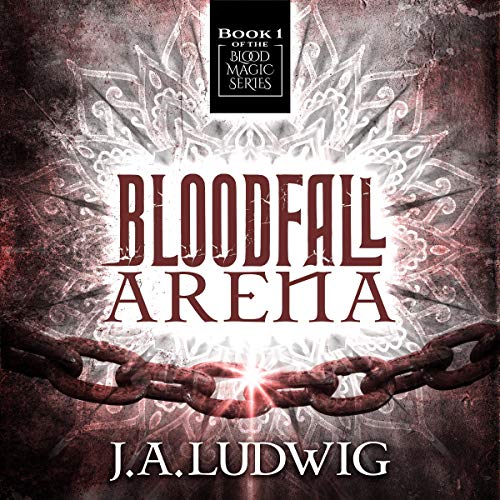 Taken from her home. Forced to fight for sport. Will a magician’s thirst for adventure be quenched with blood?

Aya Flandeen’s rare gift has always set her apart from the rest of her village. Though she yearns to venture into the outside world, she didn’t expect her journey to start with a brutal slave-trader’s raid. Revealing her powers to save the townsfolk, Aya’s heroism ends in disaster when she’s abducted and compelled to participate in a gladiatorial fight to the death.

Aya barely survives the brutal combat thanks to a surprising ally, a mysterious young man who also possesses a magical gift. But when a cruel king drops them both into a savage tournament, her only chance lies in teaming up with fellow captives to oppose the deadly beasts and assassins.

Can Aya lead a revolt and escape the violent contest?

Bloodfall Arena is the first book in the Blood Magic fantasy series. If you like strong female characters, epic struggles, and mesmerizing worlds, then you’ll love J. A. Ludwig’s tale of self-discovery.

Buy Bloodfall Arena and enter a realm you will never forget!

What listeners say about Bloodfall Arena

This audiobook had me hooked from the beginning, and kept me engaged throughout. I already can't wait for the next book in the series!

Aya, the protagonist, is lovable and caring towards others. She is a magic user who can use her powers to heal others... little does she know, her powers are more special than she thinks.

Her village is attacked, and she's captured, enslaved, and sold to an arena that forces slaves to fight to the death.

This had me thinking a lot about the Colosseum, which I got to see when I traveled to Italy... seeing it blew my mind, and I happened to listen to this audiobook on the one-year anniversary of my visit. It added another element of the story for me to reminisce about the dark yet fascinating history of humanity while engaging in this awesome novel. The magic added another super-cool element to this already tantalizing tale.

The narrator, Zura Johnson, did a fabulous job. Her voice is rich and warm, and she has a talent for breathing life into each character she voices. I'll absolutely be listening to more of her narration in the future.

Pretty Good for a YA Read

One of my biggest grievances with YA books these days is the saintlyhood (it's a word) of the female lead character; no flaws, always needs to be rescued, and always does the right thing. Where's the fun in a book without some mystery or intrigue in the main character? I found myself bored quite a bit when listening to this and found myself rolling my eyes too often to count. I guess it would be entertaining for a younger crowd trying to get into fantasy novels, but there's no "umph" in the story. Other than that, the narration was okay. It often sounded like Siri or Alexa reading a book out loud, aka robotic, without emotion.

This book was a fun listen and so different from anything I’ve listened to recently. Very well written and unique. I enjoyed the pacing and characters.
I was given this free review copy audiobook at my request and have voluntarily left this review.

I absolutely loved it! This book was full of action, adventure, drama and suspense! This book caught my attention from the very beginning and held it throughout the entire book. The narration was outstanding and gave the story that extra flair! The narration was outstanding. It will keep you entertained! The author did an amazing job with the character builds and plot! This was my first book by this author but definitely not my last! I look forward to the next book in this series! I was given this free review copy audiobook at my request and have voluntarily left this review.

Loved this story and performance was amazing!

It was so fun to learn about this world of magic. I’m excited to hear the next one.
The narrator did an amazing job!

An excellent novel with great character development and world building. I truly enjoyed this book.. Can’t wait to see more from the author!
The narration was done excellently as well. Wonderful talent!