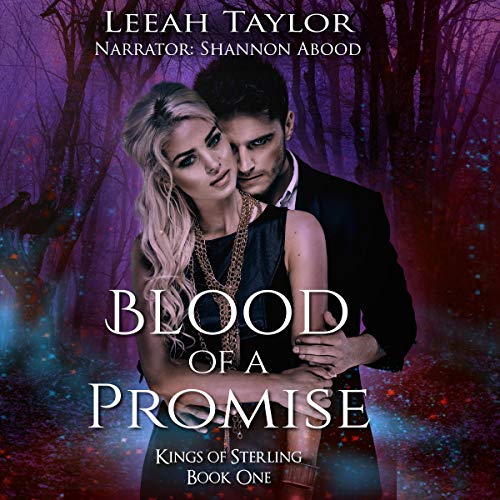 Blood of a Promise (A Paranormal Witch Romance)

By: Leeah Taylor
Narrated by: Shannon Abood
Try for $0.00

She’s a witch. He’s a vampire. Falling in love was the easy part.

Just like her mother, Chelsea Greaves has her role to play as Regent to the witches in her home of Sterling, Georgia. She even fell in love with a vampire. Only one problem: The witches forbid it. Getting caught in a torrid affair with him will have her hung and burned. But her heart has a mind of its own.

Lucien Frost has a role to play too. He’s one of the Kings of Sterling and the only line of defense between her witches and his vampires. Sterling is his home and war was never part of the plan. But falling in love with Chelsea has him ready to make an exception if it means being together once and for all.

Can their love prevail or will her fear conquer them both?

Blood of a Promise is a wonderfully written paranormal romance with delightful and captivating characters. This was my first Leeah Taylor book, and I'm entirely impressed by her writing style and excellent character development. The world-building with the supernatural beings were all quite fascinating. The romance is exquisitely done, the emotions and passion were authentic and thoroughly enjoyable, and I can't wait for the second volume in the series.

Shannon Abood does a great job with the narration, portraying the nuances of the characters and their emotions, bringing them to life. This was a highly enjoyable listen, one I'd definitely recommend. I was given a free copy of this audiobook at my request and have voluntarily left this review.

DNF on Chapter 2. It literally opens with the H and h proclaiming their love for eachother than jumps 7 years. zero world building or character development. I have no idea how this book has such high ratings.

I enjoyed the book nice start to a new series fun and entertaining story I can't wait to hear the rest series.
I received this audio book free of charge for an honest review.

Blood of a Promise is fraught with tension, both sexual and suspense. They both know what they’re doing could have disastrous consequences, but they just can’t stop loving each other.
Leeah Taylor’s take on love and angst is brought to life by Shannon Abood, who did a fantastic job of putting just enough nuance into the different voices that the different characters were identifiable, but not so much as to be distaracting.

A little annoyed with the heroine but all in all, it was enjoyable. Shannon Abood did a great job at narrating.

So, this is the first book in Taylor's Kings of Sterling series and I have to say that I kinda felt that I had missed a previous read / listen. There was a lot of history and past that was mentioned but not really explained. However, I did love these characters. From what I gathered witches re not allowed relations with vamps and both are ruled by different governing bodies. The witches are rules by elders and a Regent, while the vamps are ruled by the Kings of Sterling - which I think there are 3 - brothers. Essentially the current regent is in love with a king and one of the elders is making life difficult...who will win out - love or the witch elder? Smooth narration - easy to listen to and a good story line, just wanting more history on this Juliet person that is forbidden from being mentioned...maybe we'll get all our answers in future books with this series!

This is a great forbidden love story, almost along the lines of Romeo and Juliet, but without quite the same level of tragedy. Right from the word go, we get Lucian and Chelsea’s love story. This isn’t a will they or won’t they story, it’s a how will they be able to sustain their love when it is literally forbidden by witches law, to the punishment of death. There are lots of sparks and passion, and very quickly we learn that over the last 7 years there is an on again, off again relationship that is mostly driven to off again due to the fears of being discovered, which would result in their deaths at the hands of the witches. It’s an archaic rule, no relationships allowed between witches and vampires, and we never seem to fully get the reasoning behind it, but there are a few witches who are hell bent on maintaining the old laws, and that fear holds a lot of sway over Chelsea, who is Regent of the witches. Though it is made clear that she is “Interim” Regent, and she doesn’t seem to hold any true authority or power, that seems to be in the hands of the elders, specifically Louisa, who is an absolutely hateful character. The true regent is Juliette, who has apparently been banished from the city and currently in hiding somewhere - another story we don’t get the full picture of quite yet. Lucien is the vampire king of Sterling, along with his 2 brothers, and has been in love (lust?) with Chelsea for a long time. Every time she shifts to “off again”, even though he understands, it steals a little of his heart away. He’s done with “off again” and wants to fight to keep the woman he loves with him, but events unfold, and secrets are revealed that shock both of them, spiraling into a series of events that may tear them apart forever.

This is a very emotional story. We get the POV for both Chelsea and Lucian, and it is clear that they love each other. They are also willing to sacrifice for the safety of the other, even when it seems to hurt the most. It’s interesting to endure the anguish, the passion, the fear as the story progresses, as it tears at your heart. We still don’t quite know how they will get their HEA, but by the end of the book, you can see the growth and strength that they have built with each other’s help. It’s a passionate, and strongly heartfelt love story. There’s more coming, and not a full resolution by any means, but it’s a great arc for the couple.

The side characters are also very enjoyable. Lucian’s brothers are a lot of fun to have in the story. There’s a real brotherly relationship - they fight, they support, and in the end they love and are there for each other. I look forward to the future books that will be centered around them.

I received this book free in exchange for my fair and honest review.

A great start to a new series!

Great start to a new series and I can't wait for the rest of the books! This is a wonderful story about frustrated romance and archaic laws! The characters are real and well developed! The story flows smoothly and is fast paced. I loved this and the narrator really added to the flow and was not disruptive! Definitely recommend this for anyone that like witch and vampire stories!

A wonderfully written page-turner, kept me coming back for more. I could practically feel the romance between the two main characters with every word, the narrator bringing the story to life. The book makes me want to continue reading the rest of the series!

I received this book free and I am voluntarily doing a review. I love paranormal romance and the author done an amazing job with the storyline and plot. The characters draw you in from the start. Listening to it on audible brings them life in a whole new way

As Lucien and Chelsey fight for and against their love for each other they find a way to fight for the others lives.

The story is well balanced between the struggles in both the MCs and the feature characters. It holds your attention well to wanting to know what will happen next

I received this book free for a honest review.

Chelsea has to cover the role as Regent of witches in Sterling , Georgia where the witches have an archaic law that if witches are caught with a vampire they are put to death and the vampire has its heart ripped out by the witches.
Lucien Frost in the King of Sterling he’s also a vampire and he and Chelsea are in love for 7 years they have hidden it from everyone but a select few . However the witches council have started to kill witches and vampires again and Lucien and Chelsea have to make a decision where to go from here.
I really enjoyed this story and the struggles Lucien and Chelsea had to get through I am hoping you find out how they get on in future books . Shannon Abood was excellent at all the characters and enjoyed listening to her .