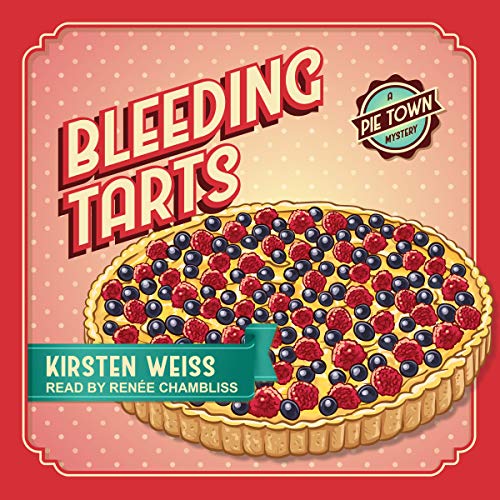 By: Kirsten Weiss
Narrated by: Renée Chambliss
Try for $0.00

Val's new pies are foolproof - but not bulletproof.

Old West ghost towns are as American as apple pie. So what better place to sponsor a pie-eating contest than the Bar X, a fake ghost town available for exclusive private events on the edge of Silicon Valley.

Valentine Harris is providing the pies, hoping to boost business for her struggling Pie Town shop and become a regular supplier for the Bar X. But no sooner does she arrive in town than a stray bullet explodes the cherry pie in her hands.

The delicious dessert is not the only victim. Val finds the Bar X bartender shot dead in an alley.

Egged on by her flaky friend and pie-crust specialist Charlene, Val aims to draw out the shooter. But solving a real murder in a fake ghost town won't be easy as pie. And if Val doesn't watch her back, her pies won't be the only thing filled full of lead....

What listeners say about Bleeding Tarts

I LOVE THIS SERIES. CHARLENE KEEPS ME CHUCKLING. HEIDI ANNOYS ME. GC KEEPS IT INTERESTING, AND VAL MAKES IT ALL WORK. THE OTHER CHARACTERS ARE INTERESTING, TOO, AND I AM READY FOR THE NEXT ADVENTURE.