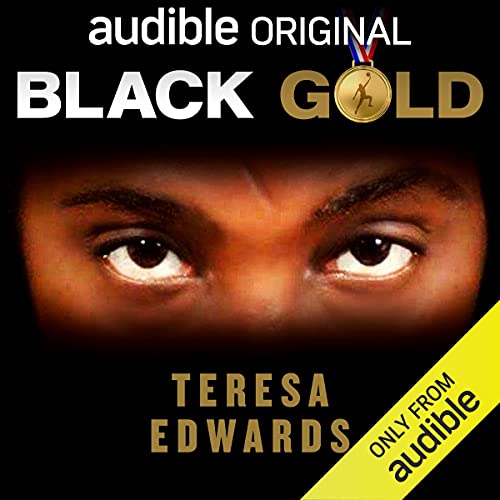 Teresa Edwards has won more Olympic medals than any other basketball player in history with four golds and one bronze. She is the youngest woman to win a gold medal in basketball - and the oldest. She’s a WNBA pioneer and has been inducted into the Naismith Basketball Hall of Fame. Now, for the first time, she shares the story of her greatest loss - and her most incredible victory. She tells the inside story of laboring in the shadow of Michael, Magic, Bird and Sir Charles - the men’s basketball “Dream Team” - and how she helped lead the USA women’s basketball squad to a golden dream of their own at the Atlanta Olympic Games. This is about more than basketball. This is an inspiring tale of what it costs to lose, what it takes to win, and how women can lead the way.

Teresa Edwards is one of the most-decorated athletes in Olympic team sports. She made history as the first American basketball player to participate in five Olympic Games, winning four gold medals and one bronze. In 1984 she became the youngest basketball player to win a gold medal, and in 2000, the oldest to win gold.
Edwards's playing career was marked by longevity, perseverance, and excellence. Born in Cairo, Georgia, she was a two-time All-American at the University of Georgia, and graduated with a degree in leisure studies. Playing abroad for nine years, she has traveled the world from Europe to Asia and captured professional championships in Italy, Spain, and France. At home in the USA, Edwards played in the Women’s National Basketball Association with the Minnesota Lynx.
She has been inducted into the Naismith Memorial Basketball Hall of Fame, The International Basketball Federation Hall of Fame, the United States Olympic Committee Hall of Fame, the Women’s Basketball Hall of Fame, Georgia’s Hall of Fame, Cairo’s Hall of Fame, and the University of Georgia’s Circle of Honors, where her college jersey number (#5) is retired.
An ambassador around the world and a leader among her peers, Edwards was selected to take the competitor’s oath at the opening ceremonies of the Atlanta Olympic Games in 1996. In 2012, the United States Olympic Committee appointed her "chef de mission" for the United States delegation at the London Olympic Games.
In 2000, Sports Illustrated ranked her 22nd in its list of the "100 Greatest Female Athletes of the 20th Century."
.
ORIGINALS

Whether you’re a die-hard sports fanatic or a casual observer, the 20 best sports audiobooks will have you cheering.

Find a rich range of women who have used their tremendous gifts for storytelling to lift us all.

What listeners say about Black Gold

Run don’t walk to get your copy!

I’ve been waiting for this book for 30 years! Teresa Edwards has been my hero for that long! I have never missed a chance to sing her praises. When I heard people talking about sport heroes I’d make sure that everyone heard about “T”.

I did not know of her struggles with Coach VanDerveer. So learning of this challenge for T was heart breaking. Beautiful told with the dignity and respect of a true champion this book demonstrates why Teresa Edwards deserves every accolade presented to her. Thank you to all who made this book possible. I hope every young person reads it and learns what really hard work and passion can achieve.

Jump Shot Betty Jaynes would be very, very proud of you T.

It’s fantastic! Read it! Listen to it!

What an Amazing, Encouraging and Inspiring Story as told by The Greatest Woman’s Basketball Player of All Time! Her Incredible story depicts how Hard Work, Dedication, Prayers, Perseverance, Sacrifice and a Godly Mother can be the Keys to seeing All your Dreams coming True! It is my Prayer that Men,Women and children of all colors will hear Teresa’s story and be motivated and Inspired as I am!
We need a movie about her life to reach even more people with Inspiration! I Thank God for allowing T to share her amazing story ❤️🙏🏾💯

A must for all historians of basketball. Heart&Soul poured in this book. Nothing But LOVE!

Get Ready for an Amazing Ride!

Black Gold has it all! Whether you're a fan of Ms. Edwards, basketball, or looking for inspiration, this is for you. It doesn't sound like a typical narrator reading a book; its like you're having a conversation with Teresa as she takes the listener through the highs and lows, trials, and victories. I laughed, teared up, felt excitement and a host of other emotions as she intertwined her experiences through different phases of her life. There are so many things I could share with you about Black Gold, but you need to experience it for yourself! One thing that really stood out in her book that's different from many books I've read by athletes is the fact that she didn't focus only on herself. She gave credit where it's due and focused on each member of the various teams and their accomplishments also.
Black Gold is for all ages, and I highly recommend it for young athletes who strive to reach the top of their game whatever the level may be. "Don't follow the crowd; follow the dream!" What a powerful statement!
I listened from start to finish in one sitting. I will listen to it again! Thank you, Ms. Edwards, for sharing your amazing ride as well as serving as a mentor and inspiration for so many people!

she brings you right into the game

interesting insight of the struggle and determination of an Olympic athelete from childhood to 4 gold medals. the passion, pain and drive are truly inspiring.

It's always nice to hear a book read by the author. Edwards does a great job sharing her story.

This is an inspiring true story about Miss Teresa Edward's and her Olympic career. Young Men and Women should definitely read / listen for a perfect example of how to overcome adversity and WIN!

I had never heard of this incredible Olympic athlete, and I think that says some thing about our culture. I’m so glad Teresa wrote down her story and recorded it. I want my daughters and the women in my life to be just as strong and passionate!

This was an excellent short story and I am interested in reading/listening more about Ms. Edwards. I appreciated how she didn’t gloss over her relationship with her coach but remained respectful. This was a great listen and I highly recommend it.

Black Gold is by far one of the greatest story told by the author herself! Listening to Teresa highlight the games she played and the real struggles she endured was fascinating and gave me goosebumps. I enjoyed the book and think young athletes who have a desire to be great and young girls who believe in dreaming big, should read this book and understand the endurance it takes to be a champion!! great job Teresa Edwards!