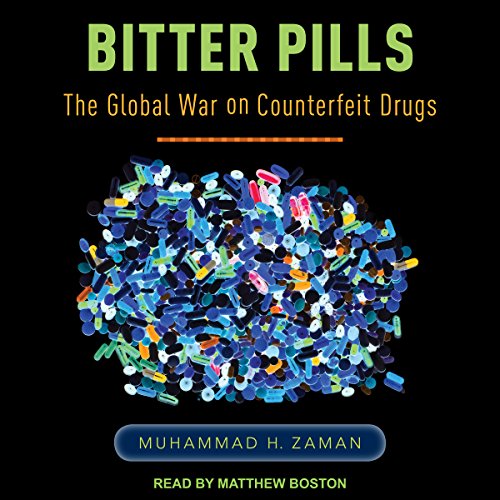 By: Muhammad H. Zaman
Narrated by: Matthew Boston
Try for $0.00

The explosion of Internet commerce, coupled with globalization and increased pharmaceutical use, has led to an unprecedented vulnerability in the US drug supply. Today, an estimated 80 percent of our drugs are manufactured overseas, mostly in India and China. Every link along this supply chain offers an opportunity for counterfeiters, and increasingly, they are breaking in.

In 2008, fake doses of the blood thinner Heparin killed 81 people worldwide. In 2012, a counterfeit version of the cancer drug Avastin, containing no active chemotherapy ingredient, was widely distributed in the United States. In early 2013, a drug trafficker was sentenced to prison for distributing an assortment of counterfeit, Chinese-made pharmaceuticals across America. By the time he was arrested, he had already sold over 140,000 fake pills to customers.

Even when the US system works, consumers are increasingly circumventing the safeguards. Skyrocketing health care costs in the US have forced more Americans to become "medical tourists" seeking drugs, life-saving treatments, and transplants abroad, sometimes in countries with rampant counterfeit drug problems and no FDA. Bitter Pills will heighten the public's awareness about counterfeit drugs, critically examine possible solutions, and help people protect themselves.

What listeners say about Bitter Pills