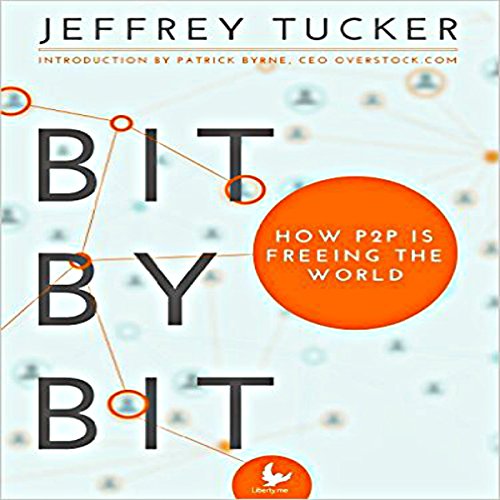 By: Jeffrey Tucker
Narrated by: Larry Wayne
Free with a 30-day trial

Bit by Bit: How P2P Is Freeing the World argues that today's emergent technology is about more than new and cool toys. Jeffrey Tucker, CLO of Liberty.me and Distinguished Fellow of the Foundation for Economic Education, argues that peer-to-peer technology is forging a new and brighter social, economic, and political order.

People tend to look at innovations in isolation. Here is my new e-reader. Here is an app I like. Here is my new mobile device and computer. Even bitcoin is routinely analyzed and explained in terms of its properties as an alternative to national currencies, as if there were no more than that at stake.

But actually there is a historical trajectory at work here, one that we can trace through its logic, implementation, and spread. It's the same logic that led from the dial phone at the county store, operated by people pulling and plugging in wires, to the wireless smartphone in your pocket that contains the whole store of human knowledge. It's all about technology in the service of individuation.

Once you understand the driving ethos and voluntarism, creativity, networks, individual initiative; you can see the outlines of a new social structure emerging within our time, an order that defies a century of top-down planning and nation-state restriction.

It is coming about not because of political reform. It is not any one person's creation. It is not happening because a group of elite intellectuals advocated it. The new world is emerging organically, and messily, from the ground up, as an extension of unrelenting creativity and experimentation. In the end, it is emerging out of an anarchist order that no one in particular controls and no one in particular can fully understand.

What listeners say about Bit by Bit

About much more than technology

I picked up this book as someone who is a big fan of Tucker's writing as well as someone new to blockchain technology and thought that this book would be a great discussion.

This book contains that discussion, but there is much more. Tucker's strength is that he loves the greatness brought about by human freedom, and he can't help but speak to the glories of liberalism and commerce even in ways disconnected from the central theme: peer to peer technology.

Nevertheless, if you're looking for a book that outlines the future of human liberty, this is it. It outlines the way in which culture, commerce, and society are making the world more free. This is not a book about bitcoin. It's a book about liberty. But more importantly, it's an optimistic book, a motivational book, one that prompts you to live liberty, rather than wish for it.

Despite its brevity, it's perhaps a little longer than it needs to be. Tucker invokes many anecdotes andhistory lessons, and perhaps goes into more depths on these tangents than is necessary. That said, if you're interested in a libertarian writer that loves freedom more than hates oppression, Tucker is your man. In a world where government seems to try to capture more and more of our lives, he is able to elucidate the ways in which free enterprise and voluntary cooperation make life beautiful. While he's perhaps better in shorter, more limited writing and speaking, his love of liberty makes Bit by Bit a delightful primer on the social role of peer to peer technology.

Fascinating journey into a realistic future

An encouraging, well told narrative that gives hope for a brighter future. Narration was a but uneven at times, but overall quite good.