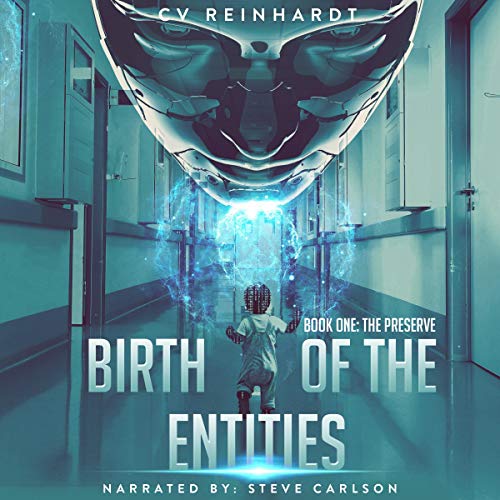 Birth of the Entities

By: Christian V. Reinhardt
Narrated by: Steve Carlson
Try for $0.00

Few moments in history have been so significant to shake our foundations and change the future. Take, for example, an apple falling on someone's head. A cherry tree being chopped down. Maybe a young scientist, working on the Mars mission, dropping and breaking his tablet. Or maybe a washed up reporter, getting involved in a Titanic situation. How about a contest for grooming artificial intelligence put on by a little known government agency?

As we journey forward into an age of artificial computer-based intelligence, we know they will be transformed into robots, with goals and aspirations of their own. However, it will be the term entities that will become the politically correct term, not robots.

Birth of the Entities will take us into that world, witnessing how humans evolve because of these new life forms. However, will we, as humans , welcome these new life forms? Will we adapt in an attempt to accept them, or will we endeavor to preserve the old ways?

BotE is book one in the Preserve Series. Welcome to the new age!

What listeners say about Birth of the Entities

I’m so sorry to say this is absolutely not my kind of book.
I think it’s too hardcore sci-fi for me.
Each chapter jumps to another story with other people in another time. Just when I began to feel a bit of interest, the story would jump. Very frustrating.
Non of what I heard so far could keep me engaged or interested. I have no idea where the story was going, I didn’t feel anything for any character, just totally not my thing.
I made it to chapter 8 (with difficulty) and had to admit it just wouldn’t make more sense to me than it did now. (non)
Maybe this kind of storytelling is easier to follow in written format? Though I don’t think it would have made a difference for me.

The narration didn’t help me feel engaged either.
I thought it sounded a bit boring. There wasn’t much character distinction.
There was some difference between the normal male voice, a woman or an older man.. but to me it all sounded somewhat the same, and that doesn’t help if you have difficulties following the story in the first place.

Please keep in mind my review is based on 2 hours of listening to something that is obviously not meant for me.
And I want to add I always have difficulty listening to a story if I don’t feel any connection to the main (or one of the main) characters. I need to feel like they are real people and I need to feel invested in them and care about them to like a story. I’m sure this is different for everyone..
I’m sincerely sorry I didn’t foresee this, I don’t enjoy leaving bad reviews.

I got this Audio Book for free (thanks!). I'm voluntarily leaving this review.
Opinions and ratings are my own and not influenced by how I got the Audio Book.

Complex, multi-faceted story with many moving parts that work very well together. Characters are developed with great detail and distinct traits and personalities. The story line is intriguing. Looking forward to the next installment of The Preserve series.

The world and times all form a journey into different types and uses of AI. Book two has a lot to live up to.