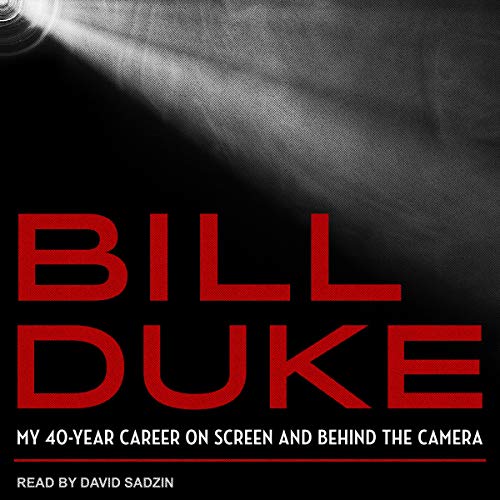 While many film fans may not be familiar with Bill Duke's name, they most certainly recognize his face. Dating back to the 1970s, Duke has appeared in a number of popular films, including Car Wash, American Gigolo, Commando, Predator, and X-Men: The Last Stand. Fewer still might be aware of Duke's extraordinary accomplishments off-screen as a talented director, producer, entrepreneur, and humanitarian.

Bill Duke: My 40-Year Career on Screen and Behind the Camera is the memoir of a Hollywood original. In an industry that rarely embraces artists of color, Duke first achieved success as an actor then turned to directing. After helming episodes of ratings giants Dallas, Falcon Crest, Hill Street Blues, and Miami Vice, Duke progressed to feature films like A Rage in Harlem, Deep Cover, Hoodlum, and Sister Act 2.

In this candid autobiography, Duke recalls the loving but stern presence of his mother and father, acting mentors like Olympia Dukakis, and the pitfalls that nearly derailed his career, notably an addiction to drugs. Along the way, listeners will encounter familiar names like Danny Glover, Laurence Fishburne, Forest Whitaker, Arnold Schwarzenegger, and Whoopi Goldberg.

What listeners say about Bill Duke

I heard about the book from DJ Vlad. This was a great listen. I will rent his movies.

Always enjoyed seeing Bill Duke in films. It was nice to learn about the man behind his iconic characters.

great listen from beginning to end!

I really enjoyed listening to this book. Love the raw truths Bill shared about his personal life and his life in Hollywood.

Bill Duke peels back the veil of his world and courageously allows his life to be instructive to the human condition and how to rise above it when needed. A pleasant and inspiring piece. Amazing the giants that this man knew and no wonder he. Became a Giant himself