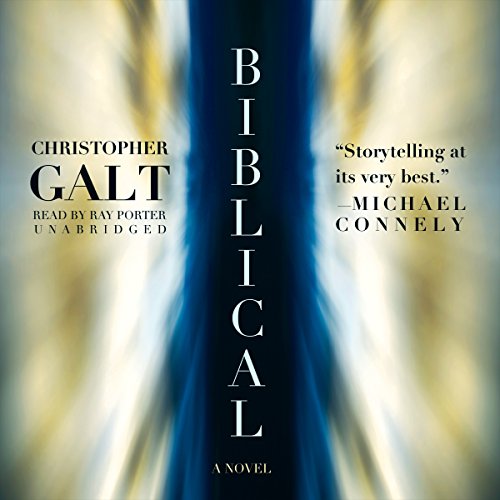 By: Christopher Galt
Narrated by: Ray Porter
Try for $0.00

In the tradition of Michael Crichton and Margaret Atwood comes this apocalyptic thriller that pits cutting-edge science against God and asks, who will win?

A strange phenomenon is sweeping the globe. People are having visions, seeing angels, experiencing events that defy reality. Bizarre accounts pour in from distant places: a French teenager claims to have witnessed Joan of Arc being burned at the stake; a man in New York dies of malnutrition in a luxurious Central Park apartment; a fundamentalist Christian sect kidnaps and murders a geneticist.

Then there is the graffiti We Are Becoming that has popped up in every major city around the world, in every language. And everywhere people are starting to talk about John Astor, the mysterious author of the book that seems to be at the center of it all.

After a rash of suicides around the world by individuals experiencing time-traveling hallucinations, psychiatrist John Macbeth and a team of FBI agents and scientists assemble to find out what's going on before it's too late. Is this a spiritual phenomenon - or something more sinister?

What listeners say about Biblical: A Novel

I so wanted to love this book!

You should never buy a new car model in its first year and you should not get an audiobook after reading only 1 review! However, I purchased this book firmly convinced I would love it. It sounded intriguing and had a wonderfully positive review.

And here's the thing. It has a very skilled narrator who did everything perfectly. And, I am sure, it is very well written, very intelligently thought out and researched, technologically oriented, and it is the type of science fiction I usually like. So, what went wrong?

Well, I am still trying to figure it out, so bear with me. As far as the characters, there were none I could identify with nor any I found interesting or especially likeable. Throughout the great majority of the book, extremely odd things were happening such as mass hallucinations. Lots of symptoms were presented with only vague hints of what might be the cause. I wasn't holding my breath in anticipation, nor was I invested enough to care very much. You could say that for me, this was not a nail-biter, and that might be an understatement!

Yet, I hung in there and kept listening whenever I could, as I was sure that when the great reveal came, it would be worth all the waiting. I figured the cause of the turmoil and possible destruction of the world would be mind-bending. It just wasn't mind bending and it came way too late, maybe the last chapter! I listened to that chapter over a couple of times to grasp what happened and realized this book just didn't do it for me.

So, this is how I come to be rating the book as middling, a book that has an excellent--no superb--narration, a book that shows off the author's writing skills and seems to be well thought out.

If you could sum up Biblical: A Novel in three words, what would they be?

Probably the main character, John Macbeth. Without spoiling anything, it's kinda hard to explain the just how much he's forced to come to grips with and even at the end never comprehends everything fully.

Probably the one where John listens to Gabriel on top of the church roof.

What if Descartes was wrong?

Ray Porter is probably one of the best three narrators offered on Audible. Blackstone is incredibly lucky to have him and I frequently find myself buying books simply by virtue of the fact that he's narrating them. The man is a genius.

This author has some deep seated hatred for religion. The central theme is this hate. He cannot go long without saying how evil religion is and people who believe are bigots and have the intellect of a stool, people who cling to their superstitions and hate others fof other beliefs. I am astounded at his own hypocrisy. The story is just a rip off of other much better stories before it. There are several meaningless character arcs which lead nowhere. He tries to make topics sound intelligent by using terminology related to complex subjects but can't delve into the meaning of these terms. The whole "work" is a troll.

Audio book of the year !

Anyone, friend, family or foe! This is truly one of the best audio books I have ever heard. It's content, it's performance,and it's thoughtfulness are universal and moving.

Yes, I was not sure how it would resolve until the very end..if it actually resolves at all for that matter.

No favourites, as it needs to be looked at as entire body of work.

The name says it all, although it would likely be very controversial.

Ray Porter is stunning in this, and brings this brilliant book to life. I can't recommend it high enough. Get it, listen, and enjoy!

What a complete waste of time

If there was a choice of zero stars I would’ve given it zero stars. I Listened to the very end hoping that at some point the story would get good and there would be some surprise. This was a complete waste of time and did contain some interesting stories but the overall story was pointless. A very poor storyline in my opinion.

I feel like this book snuck into my awareness. It wasn't on any of the lists I look to for recommendations...I didn't see it on Amazon or B&N, and it took me a couple of tries to even find it on Goodreads.com. I think it was tucked into one of those "people who bought this book also bought" kinds of sections. Regardless -- I love Ray Porter and the fact that he was the narrator was enough to make me go through the reviews and ultimately choose Biblical: A Novel.

My point is, I think this book is kind of a gem, and I don't know why it isn't more popular! The plot is intriguing and fairly original, the characters are engaging and the writing is intelligent and flows well. Ray Porter's narration is perfect for this story, and his outstanding gift for characterization really brings the people and settings to life!

I'd read a review that criticized the writing as being un-necessarily high-brow -- which it isn't. The author clearly enjoys a wonderful vocabulary, but none of it was out of place or jarring in the context of the story. On the contrary, there's so much philosophy, psychology and science woven through the story-line, it'd feel like "dumbing it down" to use less accurate and meaningful words.

I do have to say that I suspected how it would end from the very beginning. I think one of the reviews I read had dropped a very un-subtle and spoiler-esque hint (shame on them)...but I think I would've figured it out quickly, regardless. But even that suspicion didn't detract from the enjoyment of the story!

I think this is an excellent book for lovers of sci-fi, philosophy, psychology, or anyone just looking for a well crafted and enjoyable story!

This book is well written with strong characters and a solid story line.
And, Expertly narrated by Ray Porter. As a matter of fact, the fact that Porter signed on to narrate the book, led me to ignore the bad reviews even more. Why would Ray Porter narrate an awful book?
I admit, I passed on this book several times because of several very bad reviews. One reviewer stated the book never explains what was actually happening. Another reviewer was appalled at the “attack on religious beliefs”. Some said it rambled on without explanation.
I say, don’t put any faith in bad reviews. I don’t know how they came to their conclusions about the book, but I don’t know how they could have finished the book and still not understand what was going on. The book has a solid conclusion and it’s very well written. Really makes you think.
If you find the synopsis interesting, go for it. You won’t be sorry.

This book may seem a bit slow moving in parts, but there is a good reason for this. It is SO worth continuing through to the end when you may decide to listen to the whole book over again! This book will keep popping into your mind, making you question your view of reality - The best kind of science fiction!

Would you try another book from Christopher Galt and/or Ray Porter?

I would just for the fact that this novel was a fun exploration of ideas related to the simulation hypothesis of our reality.

The story was less interesting than the philosophical exposition. The characters were somewhat flat, without personality. The novel is essentially an excuse to explore the simulation hypothesis of cosmology through the form of a thin narrative. The vast majority of the content in this novel falls under one of two categories: 1.) Cataloguing hallucination experiences; 2.) Expository dialog about quantum physics and philosophy.

Did Biblical: A Novel inspire you to do anything?

Not really. If these ideas were new to you, this book might blow your mind. However, as a student of this kind of thing, I found that I saw the ending coming half way through.

I would like to see these authors dive deeper into these waters but to focus more on showing their story through character, plot, and developments rather than couching it so intensely in exposition.

The story is pretty solid, but the writer aways ALWAYS feels a need to include how attractive female characters are. Yes, he describes how all the characters look, but only the female ones are given the caveat of either being attractive or not, not the male characters. It really takes away from the main storyline