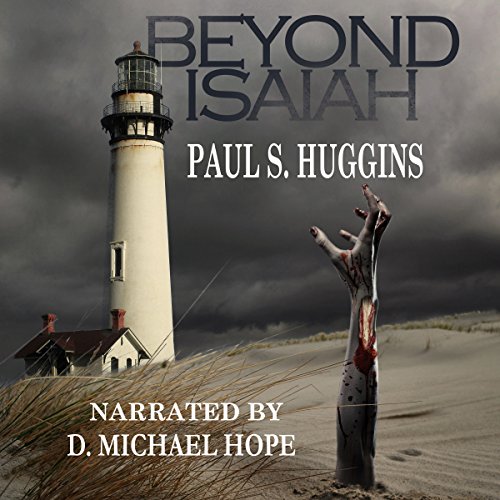 Without warning a virulent man-made disease has unleashed a biblical terror on the World. The United Kingdom is hit particularly hard leaving few places to hide in an overcrowded country.

Nine months later the ghouls outnumber the living by thousands. Survivors live an endless toil of searching for food and protecting the living. Some organisation exists, but is collapsing. Jack leads a trio of men hated by the rest of the survivors. Their job is to protect the integrity of the safe haven by preventing the infection from ever entering.

On a reconnaissance trip they come across a woman and her two children. Jack, the leader, comes to the realization that children are the key to the survival of the human race. He shifts his allegiance from slaughtering the infected to getting the kids to a possible safe zone.

What listeners say about Beyond Isaiah

A dececnt story if you stick with it!

Beyond Isaiah is your basic zombie apocalypse tale. People struggling to survive day to day. Some people even think about a future and strive to make preparations for that. This is one of those stories. What’s a bit different is these zombies are more debilitated than your “standard” zombie. These poor souls cannot see out of their hard-boiled eyes. Evidently their sense of smell is sub-par as well, as people are able to sneak by them. Best of all these zombies are named Isaiah. Why? Well, you won’t find out for quite some time and I’m certainly not going to tell you. It’s a decent story if you stick with it. The final couple chapters are excellent. This audiobook was given by the author, narrator, or publisher at no cost in exchange for an unbiased review via Audiobook Boom.

It was nice to have a zombie story that wraps up. It was odd having an American accent for this book. That being said the narrator did an excellent job.
I felt like the story did skip around a bit in the beginning. There were quite a few time jumps.
All in all I did enjoy this story. I actually like that not everyone survives because if this were to ever happen that would be comment.

Thought this book was great. Love my zombies and this book took care of that itch. lol Great narrator couldn't ask for a better preformance from a narrator. You won't be wasting your money on this one.

If you give me a good zombie tale, I'll eat it up, chew it out and ask for more.
This one was really good! I really enjoyed it, and thought all around it was very well done :)

If you're into the genre, you gotta check it out! :) Interesting take!

This really was an entertaining zombie outbreak story. Likeable characters that I really began to care for. Lots of twists and turns that honestly took me by surprise. And an ending that I did not expect. Hope this author does more zombie apocalypse stories. I will listen to this again. I received this for free for an honest review and mean every word.

I just couldn't get into this. The narration was o.k., but the story just wasn't all that interesting.

This was an okay zombie story. I think the narrator made the story better with his performance. I received this audio book for free through Audiobook Boom for my unbiased review.

i really need to make sure i check who is narratin

I was very interested in the story line when I bought this book. I may have been able to enjoy it and follow along more closely if the narrator was not so boring. The accents were laughable , the child voice was awful.. there was no emotion in the reading or TELLING of this story. I lost myself half the time because I would find myself nodding. I may try to read the book to see if it is more interesting. but I definitely will be looking at narrator names from now on before I buy anymore audible books. I will start to keep a list of names on narrators as I am new to audible. Some narrators prtray the characters to the point you can imagine you are actually listening to the "person". they draw you in with their excitement, sadness or any other emotion the characters may be feeling.

But not this one .. very MUNDANE NOT A FAN !

This was a fair to good Zombie apocalypse book.There was not enough background on the main characters.I believe fleashing it out a bit would help. D. Michael Hope was a fair to good narrator..It seemed like just when things would start flowing nicely between story and narrator,we swicthed to somoene elses story.Also,since it was set in the UK,why not have a Brit accent?I was given this book by the narrator,author or publisher free for an honest review.

I received a code for this book and this is my voluntary review.

The reason for my rating, is that this storyline is based in the U.K. and the narrator’s accent and pronunciation did not reflect this. I am from the U.K. and the way in which certain words were pronounced was really off the mark. The conversations between characters did not flow at times too.

In regards to the storyline, there seems to be gaps and it didn’t flow as well as it could have. There was a lot of awkward skipping between the timelines. The concept is fine, just didn’t float my boat.