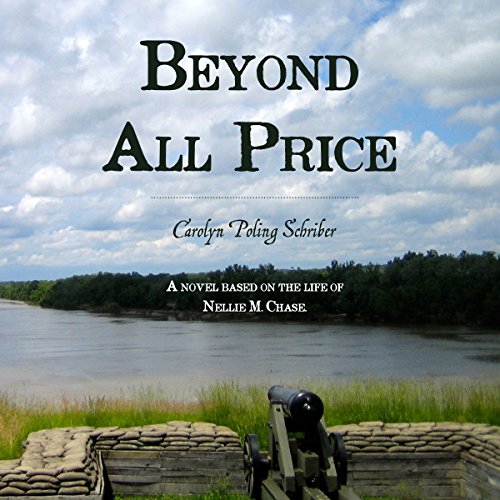 By: Carolyn Poling Schriber
Narrated by: Adrianne Price
Try for $0.00

Beyond All Priceis a historical novel, based on the real life story of Nellie M. Chase, a Union nurse during America's Civil War. History books have recorded only a few lines about her experiences as a Civil War nurse. She left no personal letters and no formal records, but those whose lives she touched remembered her as an angel of mercy. Her story, told here by a trained historian, is factual whenever events can be documented. Fictional descriptions, conversations, and transitions strive to reflect the true nature of the time in which she lived and struggled.

She had eloped at the age of 19 with a man she later discovered was a "drunk, a gambler, a liar, a forger, and a thief". She was strong enough to escape from that potentially abusive relationship and resourceful enough to find a job as wardrobe mistress for a theater. The woman with whom she shared a single room in a squalid tenement took an overdose of opium in an effort to escape a life of prostitution. Nellie joined the Union Army, because life in the midst of a war seemed safer than the one she had been living.

She found a home with the 100th Pennsylvania Regiment, a band of volunteers whose nickname was The Roundhead Regiment because of their strong religious beliefs. She believed so passionately in her country's cause that she displayed a soldier's bravery. Her skill and compassion led one of her patients to write, "Even here, amid the roar and carnage, was found a woman with the soul to dare danger; the heart to sympathize with the battle-stricken; sense, skill, and experience to make her a treasure beyond all price."

She was equally at home managing a southern plantation full of abandoned slaves, a battlefield operating station, or a 600-bed military hospital. But after the war, her deep-seated need to dedicate her life to a worthy cause continued to drive her efforts until she faced an enemy more lethal than war.

What listeners say about Beyond All Price

Would you consider the audio edition of Beyond All Price to be better than the print version?

Actually, they are about equal. That said, I was amazed at how quickly I was drawn into the story, wondering what happens next. Hearing the descriptions made a better vision of them in my mind.

Nellie Chase, the main character. Because it was mainly about her and her adventures.

What does Adrianne Price bring to the story that you wouldn’t experience if you just read the book?

Adrianne Price definitely brought the characters alive. She has an amazing talent for having a perfect voice for each character and situation.

All good. That's one of the skills the author has down pat... there is not a dull chapter and the story stays alive.

I recommend this to others.