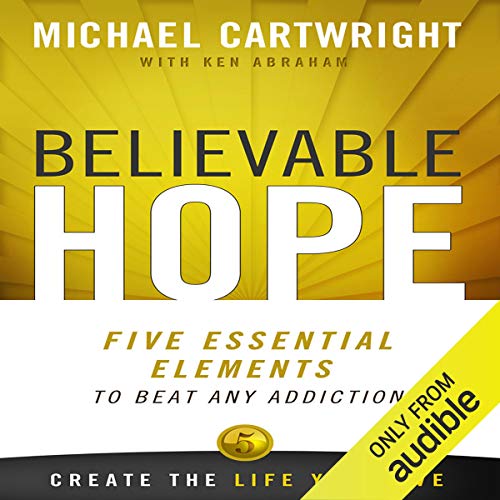 By: Michael Cartwright,Ken Abraham
Narrated by: James Conlan
Try for $0.00

Millions of people appear to be living normal lives yet they are secretly numbing their emotional pain with alcohol, drugs, food, and many other lifestyle addictions. The good news is that there is hope, and author Michael Cartwright knows this firsthand, both personally and professionally. Hooked on drugs and alcohol as a teenager, Cartwright landed in a psychiatric hospital in a catatonic state in his early 20s. Despite completing the typical recovery programs and mandatory counseling, he continued in a downward spiral until he had an epiphany that would ultimately set him free.

Once he was able to visualize what his life could be, he created an inward believable hope that his life could change for the better. By adjusting his mind-set and confronting not only his addictions, but his core emotional issues, he overcame his compulsions and became emotionally healthy and financially wealthy. He went on to establish multiple nationwide treatment centers that have helped thousands of people break the cycle of addiction. In Believable Hope, he shares his personal struggles, his recovery process, and the 5-pronged approach that has caused dramatic transformation with clientele ranging from those living on the street to celebrities and everyone in-between.

Believable Hope is a lifeline for people battling addiction, providing a fresh sense of hope for those who love them.

What listeners say about Believable Hope

I loved this book and didn't want it to stop! It is full of extremely useful material for success in whatever you want to accomplish! Thank you for writting this book and sharing your storyI. I am filled with useful knowledge and believable hope!

Best book ever for anyone seeking recovery !

if. you or a loved one is suffering from any compulsive behavior or additions including drugs, hoarding, overeating, and alcohol. I've read many books but this book offers real assistance.

Attended the author's nutrition & fitness program and was given this book. Very pleased with the FitRx program and found the book inspiring.

Excellent book. It gave me several tool to help me understand the process of addiction. The book also clearly explained the six stages of change and provided 5 elements of hope that I can apply to my life