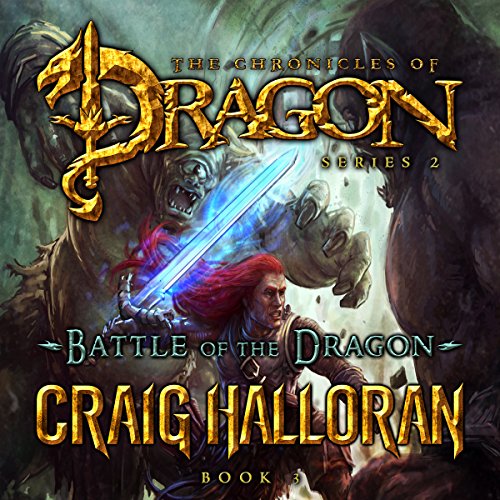 Battle of the Dragon

By: Craig Halloran
Narrated by: Lee Alan
Try for $0.00

A new future unfolds. After a harrowing escape from Urslay, the city of giants, Nath, Brenwar, and Selene find themselves in the sanctuary of the Elven Field of Dreams. The solitude and peace in the lush land offers refreshing waters but that does not last long. The wilder elves, guardians of the sanctuary, take Nath and company prisoner as he stands accused of murder. Bewildered by the accusation, Nath searches for the truth only to have Fang stolen while he lies abandoned in an inescapable prison. Nath will need some new allies to come forward as he fights for freedom and to find the truth. Meanwhile, the titans continue to rally more evil forces as they strengthen their grip on Nalzambor and turn loose giant soldiers called The Nuurg that ride the monstrous Wrathhorns. It will be another ultimate battle for Nath Dragon and his friends.

What listeners say about Battle of the Dragon

I began this book, which starts in the middle. I thought it was a book 1 in a second series in a world, but I also see it labeled as a book 3. The audio book was well done, with various character voices and sound effects, which were a little distracting at times. The narrator was good, but some of his character voices weren't my favorite. He reminded me a lot of the narrator for R. A. Salvatore's Drizzt series. The story itself, once I got into it, which took a little bit because of the fact it seemed to start after a series of battles from a previous book that I had missed, but the story was good. The story reminded me a lot of R. A. Salvatore's Drizzt series. It wasn't only the narrator's voice, but the types of characters, story line, races, and creatures. This series is filled with dwarves, elves, dragons, halflings, giants, and orcs! It's familiar, but with a different approach, and a few new creatures, like humanoid dragons with scales, and a character with scales and a tail. The characters have great interaction with each other, and as is expected, the main dwarf is full of life and energy, as well as the standard dwarven humor! I'll be sure to check out more of Mr. Halloran's books. Perhaps I'll be sure to start in a proper reading order this time!

I can't enough say how awesome Craig and his work has progressed with each book. Creativity, action, adventure, love, laughter, death (gasp!), and much more to read about!

You will not be disappointing!

The action really picks up!

In this chapter, I didn't notice any big errors or audio skips.

The action picks up and moves at a greater pace in this chapter. I really get lost in the story and I will finish listening to it.

I had already read the book. but Was able to listen to it made it even better. I enjoyed it all over again.