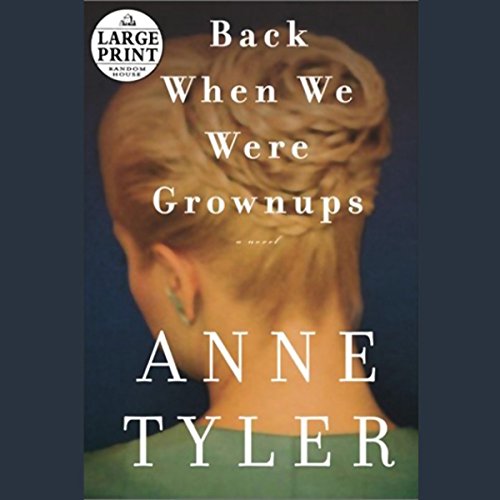 Back When We Were Grownups

"Once upon a time, there was a woman who discovered that she had turned into the wrong person." So Anne Tyler opens this irresistible novel.

The woman is Rebecca Davitch, a 53-year-old grandmother. Is she an imposter in her own life? she asks herself. Is it indeed her own life? Or is it someone else's?

On the surface, Beck, as she is known, is outgoing, joyous, a natural celebrator. Giving parties is her vocation - something she slipped into even before finishing college, when Joe Davitch spotted her at an engagement party in his family's crumbling 19th-century Baltimore row house, where giving parties was the family business. What caught his fancy was that she seemed to be having such a wonderful time. Soon this large-spirited older man, a divorcé with three little girls, swept her into his orbit, and before she knew it she was embracing his extended family plus a child of their own.

Now, some 30 years later Rebecca is caught unaware by the question of who she really is. How she answers it - how she tries to recover her girlhood self, that dignified grownup she had once been - is the story told in this beguiling, searching, and deeply moving novel. As always with Anne Tyler's novels, once we enter her world it is hard to leave. But in Back When We Were Grownups she so sharpens our perceptions and awakens so many untapped feelings that we come away not only refreshed, but also infinitely wiser.

"[Tyler's] feel for character is so keen that even hardened metafictionalists...are reduced to the role of helpless gossips, swapping avid hunches about the possible fates of the characters. You're involved before you even noticed you were paying attention." (The New Yorker)

What listeners say about Back When We Were Grownups

As always, Anne Tyler delivers an interesting story with wonderful, quirky characters. She shows life as it is lived--full of self-doubt, unintentional side-trips and lots of ups and downs. You leave an Anne Tyler book, though, realizing that ordinary lives can be extraordinary if people live consciously. Don't read it for the plot (though that is great, too)--read it for the characters.

This has been one of my most favorite Audible fictional titles. Who of us hasn't woken up sometime wondering--How did I get here? What am I doing? One decision 20-30-40 years ago from some dumb teenager who didn't have a clue---and here I am. I know some call it mid-life crisis.
This was interesting, thought-provoking, while remaining entertaining and a good read. Perhaps not quite as good as Saint Maybe but a close second.
For those who have started this book keep listening--the old man's comments near the end are worth the whole jouney in themselves!

Our true selves are never known

I very rarely ever re-listen to a fiction book. My only exception so far have been this book and another Anne Tyler book, "The Accidental Tourist".

Really good fiction makes one see beyond the plot and allows one to feel the meaning of a universal truth. Everyone needs to understand fiction for themselves, but I know why I like this book so much. The author understands how we get our purpose in life and that (at least for me) that the structure of the world is in place before we enter it and we have to accept that structure.

Or perhaps I'm just reading something into the story the author never intended. Regardless, the book can be an entertaining listen.

I was looking forward to some conclusion, some respect for the character of Rebecca. I never leave reviews but I'm just coming away from this sad.

Enjoyed the story and the narration. Definitely would recommend this. Ann Tyler at her best.

Reader was fantastic, the story itself is lacking

The narrator was fantastic. The story is terrible. It’s written like a book from the mid 1800’s but it turned out to be set in 1999! It’s about a whiney 50 year old who hates her life that she created. Generally a boring, whiney, and occasionally racist book.

What did you love best about Back When We Were Grownups?

A non-traditional plot with a complicated family that Tyler somehow made interesting and diverse.

Brown gets nuances in her acting and narration - she puts the irony where it belongs; stands back when she should.

If you could rename Back When We Were Grownups, what would you call it?

I don't know, but this wouldn't be the title.

Tyler is a master and this book so fresh and unusual - loved it.

This is just a story about a woman having a mid-life crisis. Nothing dramatic ever happens as she works her way through it. Somehow it manages to be entertaining probably because of the colorful charaters.

I had hoped this 50 something character would bring me hope. Hope that life over 50 is not all down hill but it did not. She was pathetic from Start to finish. She treated people badly and rarely ever spoke up for herself. Sorry I put the time and credit into it.

I wanted badly to be drawn in, but it simply didn't happen. I kept an open mind, and listened even when I began to feel the story was interminable. So, yes, I saw it through to the end, but only because I was hoping for a big realization, or ...something. But despite a twinge of identification with the central character's declaration of having not lived the life she was intended to have lived, I was never engaged, and I could not very much identify with Rebecca . I did not expect an optomistic novel, but I did have expectations of something a bit more insightful, and much less hopeless. I was further put off by the drab characteriztion of all the children and granchildren. None were fully fleshed out, but only provided to the reader as partial justification for Rebecca's discontent.

Anne Tyler delivers another sure-fire story of acutely observed family tensions and regret for missed opportunities. Her unhurried observations of what it's like to grow old on the periphery of a large and sometimes dysfunctional family are spot-on and never less than convincing. Her style and ear for dialogue are flawless. By the end of the book, you will feel as if you are part of their family.

Yes, because Anne Tyler is a good writer, and although the story is fairly unexciting the book is worth reading.

The interesting aspect is the main theme - the mid-life crisis. Rebecca Davitch questions her choices in life and even attempts to re-start it with her first boyfriend, but eventually concludes that she is happy as she is.

Yes, both are slow!

Cannot see the point 3 chapters in. Gave up - not my cup of tea - rambling on too long.