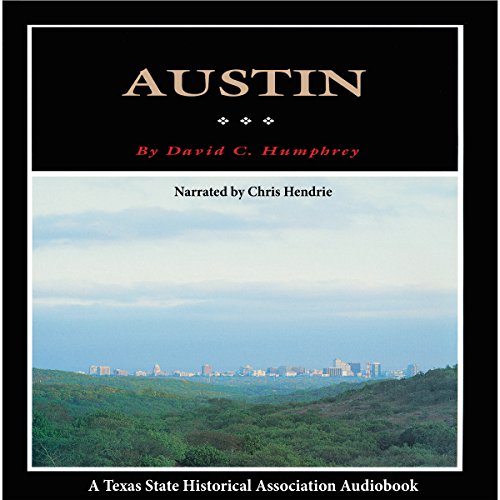 Austin: A History of the Capital City

Austin: A History of the Capital City

By: David C. Humphrey
Narrated by: Chris Hendrie
Free with a 30-day trial

Called by Sam Houston at its founding "the most unfortunate site upon Earth for the seat of government", the infant community struggled for three decades against political enemies and competing towns before winning recognition as the permanent capital. The founding of the University of Texas turned the seat of politics into the seat of education, but Austin's 19th-century dreams of becoming a river port and a factory town came to naught.

A slave city in a slave state, Austin cast its lot with the Confederacy. Retaining a frontier flavor into the 1890s, post-Civil War Austin became the headquarters of the Texas gambling fraternity and a "magnet for cowmen seeking booze and women of the night."

Turning the 19th-century frontier town into an appealing 20th-century residential community taxed the energies of civic leaders for several decades. Virtually parkless and with no paved streets in 1900, Austin by the 1940s boasted tree-lined boulevards, a cornucopia of parks and pools, and a leisurely lifestyle. But for African American residents these were years of oppressive segregation. Mexicans encountered similar treatment as Austin became a tri-ethnic community during the 1920s and 1930s.

Segregation gradually gave way in a divisive but nonviolent struggle. While adjusting to this, Austin experienced eye-popping expansion. Fearful that Austin would become "another Houston", residents sought to preserve the lifestyle that had made the capital city such an attractive place to live.

What listeners say about Austin: A History of the Capital City