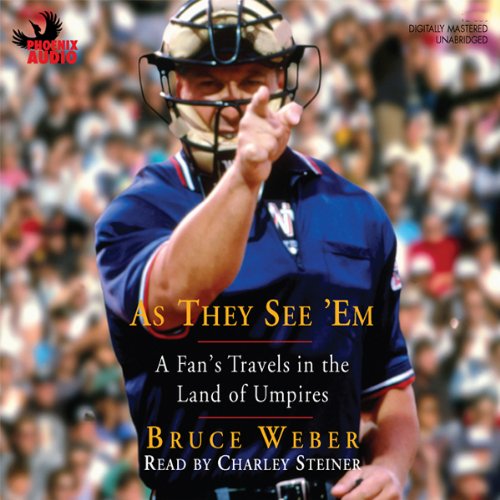 As They See 'Em

By: Bruce Weber
Narrated by: Charley Steiner
Try for $0.00

Millions of American baseball fans know, with absolute certainty, that umpires are simply overpaid galoots who are doing an easy job badly. Millions of American baseball fans are wrong. As They See 'Em is an insider's look at the largely unknown world of professional umpires, the small group of men (and the very occasional woman) who make sure America's favorite pastime is conducted in a manner that is clean, crisp, and true.

Bruce Weber, a New York Times reporter, not only interviewed dozens of professional umpires but entered their world, trained to become an umpire, and then spent a season working games from Little League to big league spring training. As They See 'Em is Weber's entertaining account of this experience as well as a lively exploration of what amounts to an eccentric secret society, with its own customs, its own rituals, and its own colorful vocabulary.

What listeners say about As They See 'Em

With close to forty years of umpiring experience on the junior level I wanted to know more about what it took to be a professional at the highest level. Not sure I could have made the commitment. Anyone who loves the game will enjoy seeing it from behind the mask.

Bruce Weber has written an entertaining, informative, and insightful book in "As They See 'Em." It is written well, filled with anecdotes, and wonderfully read by Charley Steiner.

This book provides a real education for the bleecher bums out there as well as those with little interest in baseball. For those with other interest, there are wonderful lessons on leadership, perception, geometry, history, negotiation, preparation, computer simulation and learning, contract negotiations, and about everything else necessary to the care and feeding of umps - volunteer and professional, little league, college, AA, AAA, and professional.

The game will never be the same for me and I'll watch it with different eyes. If in doubt, take this one out - for a listen.

Both veteran umpires and casual baseball fans alike will find much of interest in this book. It's well written, thoroughly researched, and the narration is perfect (it's always better when they get people involved in the subject to read – Charley Steiner is a veteran baseball broadcaster – rather than one of all those bland, dry "professional narrators"!). If you like baseball, even if you don't consider yourself a fan of the umpires, you will enjoy this book.

investigative sports journailsm at its best

Not enough has been said on this topic in the past. And everything that has been said has been from the outside looking in. Weber committed fully to this issue by becoming an umpire to give us another perspective. And it worked brilliantly.
Being Australian, I'm not a huge Baseball fan. But I am a fan of sports journalism and this story uncovers a thousand misconceptions. In doing so, it also illustrates a thousand paradoxes. Umpires are the most important people on the field but they are paid the least. They have the most important job on the field but they are the least respected, etc.
Not just thoroughly researched, but lived... This story is brilliant. Very well written as expected from a New York Times journalist. Funny, insightful, clever, enlightening. Very, very well done.
The only negative, is the narrator. I believe he was chosen because his "all-American passtime" voice represents baseball. But his speech is slurred and the page turning is very annoying. However, he did provide the narration with good character.
This is a must read for any fan of Sports, or journalism, or both.

I actually bought and read the hardcover in 2009, shortly after it was published. I was working as an umpire for the NCAA at the time and found this title to be right up my alley. I've long been a baseball fan, and admirer of the game and since my ambitions in baseball were far greater than my abilities as a player, calling balls and strikes allowed me the opportunity to be part of the game at a higher level than I could've achieved as a player. One of my biggest regrets as an umpire was never plunking down the tuition to attend the 5-week professional Umpire course outlined in the book. I almost did a few times but was making somewhat decent money ate the time and so never did so. This book gave me the insight into what I missed out on.

In 2009 I made a trip to Tucson for Umpire camp where I had the privilege of meeting former professional Umpire, and school owner, Jim Evans. Weber tells it like it is and depicts Evans exactly as what I experienced in the time I spent in AZ. Nothing is left out. I also had the opportunity to meet and work with many of those who were featured in the book, many of whom I worked college games with in 2010-2011. It was a great experience and this book is helps prolong that feeling.

The author is able to keep the reader turning pages with the countless anecdotes of those fortunate few who did make the decision to attend, and give (even the novice) a glimpse of what it's like to train as a professional umpire, and what it's like on the road, in the Minors, and Majors, and how the life of a vilified professional is endured. Keep that in mind the next time you're at the ballpark and think you could do a better job. It's easier said than done for certain.

And, you get Charlie Steiner as a narrator which adds not only to the story, but to the feeling that this is a sports book, and you're being read to by one of the sports best color commentators, and baseball analysts.

the 2017 Baseball season is right around the corner. Get yourself prepared for the season by learning how umpires are made. And then think to yourself whether or not you'd size up?

great book. Definitely a different take on baseball from a side that most people don't understand

Behind the Scenes with the Men in Blue

What made the experience of listening to As They See 'Em the most enjoyable?

Bruce Weber does a great job at humanizing the most hated men in baseball and was very fair to them. The reality that these men are working as hard as any ballplayer and do so in order to not make the career-ending mistake shows that it is part ego and part fear and gives a depth to the umpires that you won't ever catch by just watching them hammer strikes and outs.

It's not really a character book. There are talks with several umpires through some turbulent times that are painfully honest.

Listening to Charley Steiner is like watching a great baseball game on a lazy Sunday afternoon where you don't want it to ever end because of how much you are enjoying it.

The argument at the end of the umpire school, where both the author and the teacher, while acting, lose themselves in the performance and show great emotion that is only shown in moments of great stress and anger. It's so easy to fall into this situation which is a great warning to those who do umpire to always make sure to keep one's emotions in check.

Weber tells a great story that conveys the story that one should not complain about the officiating unless they have walked a mile in their shoes. Kudos to Bruce for doing so and I appreciate the new appreciation he has for umpires and the job they do.

If you like this, please also get "The Men in Blue: Interviews with Umpires" by Larry Gerlack. That is the best umpire audiobook currently available.

A cool look I tot the lives of mlb umpires, protectors of the integrity of the game. It's a good bit of information delivered by a reporter in newspaper fashion. I liked learning about their training. I am disappointed to learn there is so much animosity between mlb, players, managers, and umpires. Performance is pretty dry.

Bruce Weber creates a Plimpton’ like book about baseball umpires in "As They See ‘Em". True to Plimpton’s modus vivendi, Weber (nearing 50 years of age) goes to umpire school to conduct research on what baseball fans might call a dismal science.

In the end, one wonders why anyone would want to become a baseball umpire. If you reach the “bigs”, your income averages $200,000 a year. Not bad for a season’s work, but plan on ten years of wages that will not support a family. If you make it, you are among the elite of the elite but Weber tells two stories that show how rabid fans are capable of threatening your life and your family. Add disrespect shown by baseball managers, writers, commentators, and the general public, and it makes more sense to go to jail for ten years and be vilified as a convict than try to become an umpire.

Weber completes his book like Plimpton did when he entered the boxing ring with Joe Louis. He umpires a pre-season game. Weber explains the fear and thrill of calling a professional baseball player’s game. Umpires are gods of the game. The power of an umpire to control a game is revealed. Power is tempered by fear; i.e. mistakes made by not really seeing a play but having to make a decision. Weber explains how the strike zone is a myth and comes down to an umpire’s judgment more than a definitive description.

If one is an occasional, or fanatic baseball fan, "As They See ‘Em" is an eye-opening entertainment; well written, and nicely narrated. It is a must read for anyone seriously considering a career as a baseball umpire.

What made the experience of listening to As They See 'Em the most enjoyable?

The author made me rethink not just how I view the umpires (and, as he points out, when they are succeeding, we don't view them at all), but how I view baseball. Lots of insight on topics you just don't really think about, like what exactly this mythical beast known as a "strike zone" is, or the labor issues these guys have had to deal with, or how a call that appears on replay to have been blown is sometimes, in protecting the game's integrity, the right call.

The umpires come out of this as larger-than-life characters, and they're almost all likeable.

Which character – as performed by Charley Steiner – was your favorite?

Steiner didn't do impressions, but his voice fits with what umpires should sound like: naturally jocular, middle-American guys with big voices who can convey authority and gravitas between the lines.

It drags a bit when the author describes the process of making an umpire: schooling, minor-league assignment, and the slow slog to the top. But it's worth getting over that early hump.

As someone who has played, watched, and coached baseball, I got a new perspective on a thing I've seen thousands of from many different angles: a baseball game. How many books can deliver that?