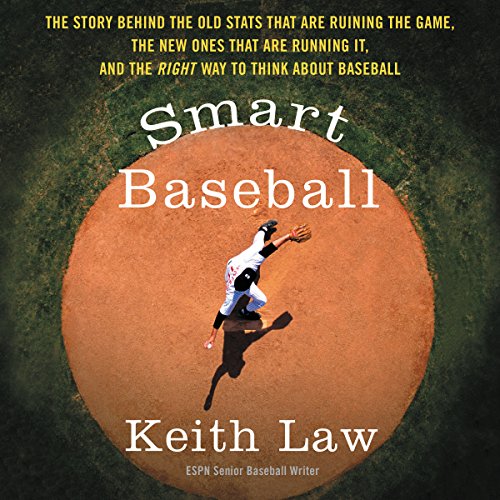 By: Keith Law
Narrated by: Mike Chamberlain
Try for $0.00

Predictably Irrational meets Moneyball in ESPN veteran writer and statistical analyst Keith Law's iconoclastic look at the numbers game of baseball, proving why some of the most trusted stats are surprisingly wrong, explaining what numbers actually work, and exploring what the rise of Big Data means for the future of the sport.

For decades, statistics such as batting average, saves recorded, and pitching won-lost records have been used to measure individual players' and teams' potential and success. But in the past 15 years, a revolutionary new standard of measurement - sabermetrics - has been embraced by front offices in Major League Baseball and among fantasy baseball enthusiasts. But while sabermetrics is recognized as being smarter and more accurate, traditionalists, including journalists, fans, and managers, stubbornly believe that the old way - a combination of outdated numbers and gut instinct - is still the best way. Baseball, they argue, should be run by people, not by numbers.

In this informative and provocative book, the renowned ESPN analyst and senior baseball writer demolishes a century's worth of accepted wisdom, making the definitive case against the long-established view. Armed with concrete examples from different eras of baseball history, logic, a little math, and lively commentary, he shows how the allegiance to these numbers - dating back to the beginning of the professional game - is firmly rooted not in accuracy or success but in baseball's irrational adherence to tradition.

While Law gores sacred cows, from clutch performers to RBIs to the infamous save rule, he also demystifies sabermetrics, explaining what these "new" numbers really are and why they're vital. He also considers the game's future, examining how teams are using data, from PhDs to sophisticated statistical databases, to build future rosters - changes that will transform baseball and all of professional sports.

What listeners say about Smart Baseball

an interesting take down of the existing, prevailing wisdom in baseball and how it should be calculated. that said, Law is arrogant about his beliefs and therefore comes off as smug. the performer plays to that smugness in his reading, which only makes it worse.

still, absolutely worth it for baseball fans looking to do a little deeper into the modern analysis of the game.

Great intro for rookies, nice brush up for vets.

I've followed Keith's work for a long time, this book doesn't disappoint. It's got all the snark you're used to along with a bit of humor and a ton of knowledge. While there wasn't a lot of knew information for someone who follows baseball and sabermetrics it's still essential reading because it looks at how statistics have taken over the game and driven out the old, illogical ways of the past. You'll learn a bit about sabermetrics and a lot about the state of the game itself. Great read, thanks Keith!

Changes the way you think about baseball

If your obsessed about baseball & stats, or want to learn more about the game then this is the book for you. It’s funny, informative & entertaining. Law gives great explanations and turned this baseball purist into a believer of advanced metrics. Highly recommended

Keith Law's sense of his own self-importance makes him insufferable at times during this audiobook. However, the content and logic of his arguments are generally strong so one tries to filter out the awful narration and focus in on his words. It's hard to do and often, not worth the trouble. I'd choose Brian Kenny's "Ahead of the Curve.." over Smart Baseball. Kenny can also be insufferable, but his narration of the book is engaging.

I've been a passionate baseball fan my entire life and I've always considered myself to be above average in terms of knowledge of the game. I learned more about baseball in this book than anything I've ever read or seen. This book will allow fans to view the game from a whole new perspective. You will start to view the game from a GMs point of view and really understand how your favorite team operates and what they look for when evaluating prospects and current MLBers.

I could only make it through eight chapters but I couldn't take the negativity any longer. It's one whining reason after another why the stats used to narrate the game are criminal. Instead of focusing on all the injustices of one player being labeled better than the other for over significance placed on certain stats, I would have rather heard more historical stories about how things came to be, inside how the stats have evolved or even players personal reactions to the changing times. (He gives a little of this but very limiting) Instead we get in his opinion how misuse of certain a stats robbed Roger Clemons of a cy young award or how Magglio Ordonez stole a batting title and much more. I like Keith Law's voice in other places but this read is not educational or enjoyable.

Book should be called “dumb baseball”. Don’t waste your money or time with this one.

A great breakdown to fully understand how and why these stats work and changed every front office in baseball. Cardinals and Brewers suck!!

This book cleared so many old ways of thinking about the value of an athlete. So glad to have made this reading my first in audible books. For the baseball fan it’s a must read/hear.

I wanted to know mathematically why outs were so bad

This was answered along with everything else you’d ever wondered about. It was summed up in the latter half with an analogy. The author proves quantitatively that there is more run potential in hitting three or four singles than in hitting a solo homer and not reaching for the rest of the game. I finally understand a basic concept of saber metrics.

The only gripe I had is silly. How some of the book is written combined with the narrator’s voice reminds me of Justice Kavanaugh.