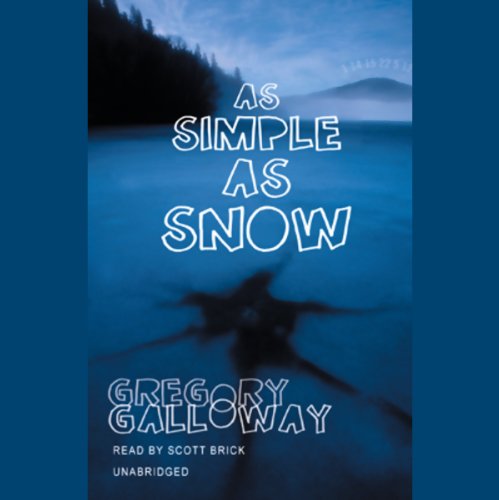 As Simple as Snow

As Simple as Snow

When the enigmatic Anastasia shows up in the halls of Hamilton High, the narrator finds his life changes greatly. She opens his mind to Burroughs, Baudelaire, Chet Baker, and Mozart. She reveals a world of magic tricks, ghost stories, and affectionate mind games. Together the couple probe through enchanted woods, the Internet, and everything in between, until one winter evening when Anastasia disappears, leaving only a dress on a frozen pond and a string of unanswered questions. Suddenly alone, the narrator is hit with the weight of life's less playful mysteries, possible signs from the supernatural, and the mystery of what actually happened to his missing love.
©2005 by Gregory Galloway (P)2005 by Blackstone Audiobooks

"It turns out that snow is 'actually very complicated', and so is Galloway's quirky, engrossing debut....This rich, complex puzzle is the work of a talented author." (Publishers Weekly)

Although this book was a little strange and not my usual read, I could not stop listening to it. Things don't quite tie together at the end like they should though, but it was still very interesting.

As Simple As Snow is easily the most addictive novel I've encountered in years. I'd put it on a par with Catcher In The Rye. It starts out like a character driven story that carries you along on the strength of the central characters with whom it's easy to identify. Beneath the surface of the prose, however, there's an ominous sense that something dire is going to happen. About half way through the story it does. From there on the plot runs furiously at full speed. The story revolves not so much around what people do, but what people think that drives their acts. Anna is always telling "G" to pay attention to what she says to him, what she sends to him. Anna is a D student, G is an honor role student, but Anna is the smarter by probably 10 IQ points and G knows it and loves her for it.

The story examines the success of a normal if isolated male plodding forward, doing what's expected of him and accomplishing what's expected of him, and the prejudices he develops through this conventional life style. When he encounters a female clearly better at processing symbols than he is, it first makes him question his values and then opens his mind to a different set of connections.

This story is also about dysfunctional people living in a dysfunctional town. If we saw the story through Anna's eyes instead of G's, an awful lot of detail would fill in. G has a philosophy of just going through the motions, not looking too closely, or asking too much. When we meet him, he'd rather not know the details of his mother's relationship to the town drunk whose son is the local drug dealer and G's best friend. G's relationship with Anna becomes his whole world, but he'd rather not know the details of Anna's relationship to every one else in town. As a listener, this is an annoying characteristic of G. In the plot of the story, it is probably the reason for the success of Anna's and G's relationship.

A number of reviewers have remarked that this story is unresolved. That is the author's point. Life seldom resolves for anyone and even less so for teenagers. Hopefully teenagers go on to college. If not they marry and enter the work force, but whatever was important in 10th Grade is going to be different at 20.

That said, I found comfort in Anna's obituary for G at the end of the book. I think when I listen to this again, I'm going to write out the codes on the short wave, and the meaning in that long, repetitious poem at the end and see if I can figure some of the mysteries out. In the meantime, Mr. Galloway has written far and away the best novel I've read in years, and at the same time offered a completely new twist to the ghost story. I loved this book.

This was a very good book, the writing style was keeping me on my toes. I listened for hours on end. The only down side is that the book is very similar, if not exactly like John Green's Paper Towns. However, I still enjoyed this mysterious and romantic novel, regardless of its similarity to Paper Towns.

What other book might you compare As Simple as Snow to and why?

I would compare this to Paper Towns by John Green, because the concept is exactly the same. The books both have male main characters and they both fall in love with mysterious teenage girls who disappear.

I liked the scene where Anna allowed the narrator to read from her journals for the first time.

Could you see As Simple as Snow being made into a movie or a TV series? Who should the stars be?

I don't really see it being turned into a movie, but maybe a three-episode special on BBC. The plot is too similar to Paper Towns for it to be a movie. Perhaps the whole show would be filmed from a first person perspective instead of a second person perspective. Perhaps Sophie Turner would play the part of Anna to keep the blonde character trait.