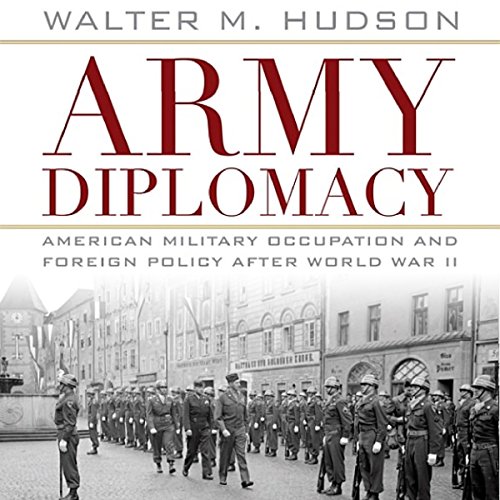 By: Walter Hudson
Narrated by: Donnie Sipes
Try for $0.00

In the immediate aftermath of World War II, the United States Army became the principal agent of American foreign policy. The army designed, implemented, and administered the occupations of the defeated Axis powers Germany and Japan, as well as many other nations. Generals such as Lucius Clay in Germany, Douglas MacArthur in Japan, Mark Clark in Austria, and John Hodge in Korea presided over these territories as proconsuls. At the beginning of the Cold War, more than 300 million people lived under some form of US military authority. The army's influence on nation-building at the time was profound, but most scholarship on foreign policy during this period concentrates on diplomacy at the highest levels of civilian government rather than the armed forces' governance at the local level.

In Army Diplomacy, Hudson explains how US Army policies in the occupied nations represented the culmination of more than a century of military doctrine. Focusing on Germany, Austria, and Korea, Hudson's analysis reveals that while the post-World War II American occupations are often remembered as overwhelming successes, the actual results were mixed. His study draws on military sociology and institutional analysis as well as international relations theory to demonstrate how "bottom-up" decisions not only inform but also create higher-level policy.

"A significant contribution to the literature on the U.S. Army's role in planning for and administering occupations." (Theodore A. Wilson, editor of Victory in Europe 1945: From World War to Cold War)
"A new and important interpretation of 'war termination,' something that challenges all victorious armies and governments." (Jonathan House, author of A Military History of the Cold War, 1944-1962)

What listeners say about Army Diplomacy