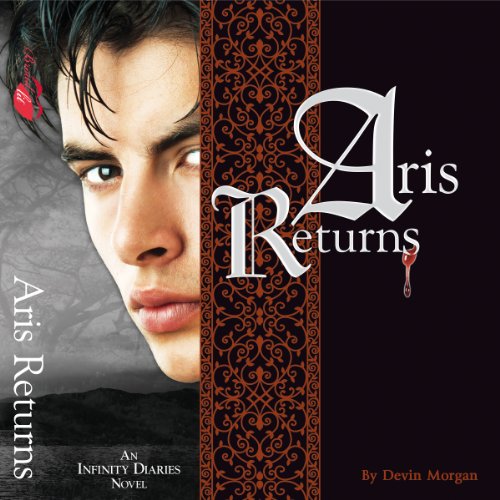 An Infinity Diaries Novel
By: Devin Morgan
Narrated by: Gale Cruz
Length: 9 hrs and 3 mins
Categories: Romance, Fantasy
4 out of 5 stars 3.8 (19 ratings)
This title is included in Audible Escape

Psychologist Sarah Hagan thought she had her life under control. She pulled herself together after a painful (and unexpected) divorce. She's currently dating a successful, but neglectful attorney - a relationship that is adequate, if not totally satisfying. She has a few good friends, lives in a beautiful condo in the heart of Chicago, and loves her work as a therapist. From the outside, it looks like her life is almost perfect.

It only takes one patient - a handsome younger man named Carlos who is on parole for car theft - to put her well-ordered life into a tailspin. As she regresses him with hypnotherapy, she discovers an unusual presence. Is this some elaborate alter ego that Carlos has created or is something much stranger going on? In Sarah's attempt to help Carlos deal with his issues of anger and a troubled past, she is captivated by the persona she uncovers through hypnosis - Aris. Aris reveals that he is a vampire whose story begins in the time of Alexander the Great. His retelling of his lives, involvement and apparent demise in the court of Henry VIII keep her spellbound and hungry for more.

On top of grappling with a phantom vampire, Sarah begins to have the most disturbing (and sensual) dreams. They awake the emotion, passion and vulnerability that she thought she had buried for good. The dreams both terrify and excite her as she struggles to make sense out of her world turned upside down. Sarah genuinely cares about Carlos as a patient and wants to help him find his way to a better life, but he has brought chaos, confusion and danger into her neatly buttoned-up reality. And if that's not enough to deal with, she is inexplicably drawn to Aris in a way she can't begin to rationalize. Can Sarah possibly love this vampire "ghost" or will he destroy everything she treasures?

Firstly, let me say this is the 1st part of a trilogy so you won't be disappointed as I was when it finishes and you scream WHAT!!? .... but wow what a different take on a Vampire story.

I found this book to be a "just another chapter" listen as the riveting, captivating, unique, emotional, enjoyable and compelling story slowly unfolds and your mind and loyalties become torn and you sway backwards and forwards between Aris, Sarah and Carlos not knowing just who to sympathise and root for.

It's an intense mystery and a unique story that will take you from a Hypnotherapist's chair to various historical time periods including Henry VIII's Court life but also to the Court of the Vampire King and Queen. Then suddenly your back to present day where there's a dangerous sinister gang, a briefly mentioned ex husband and boyfriend, close friends, Carlos' family troubles, some disturbing but pleasant dreams and a simmering attraction and underlining building romantic feelings for a patient.

It could easily have been a 5 star listen but I felt the story seemed a bit 'choppy' and lacked any real heat or romance, yes there were a few brief 'moments' in her dreams but they weren't very descriptive, sexy or hot and I felt a bit robbed of the passion (but hey that's just me). It was very rich in visualisations describing every detail this was good in one way because it awarded you fine mental imagery but sometimes things were just plain unnecessary. I don't know how accurate the historical references were but I'm sure Henry VIII didn't say "yes sweetie" and some of Sarah's actions and decisions were just stupid.

Worth a credit? My bloodshot eyes and the bags under them will bear testament that YES this unique story is definitely worth a credit in my opinion and I'm desperate for the next one. However, it may not be for everyone.

In this book a therapist tries to help a beautiful young man change his life through past life regression. I really enjoyed this book!

recording glitch or what

there was about a 5 min hole of no speech at around 1hr 40 left in book very annoying.

Every chapter is a repeat of the one before

This book is terrible. Repetitive and boring. The reader is even worse. It ends right when you think it may have some substance. I do not recommend.

What was most disappointing about Devin Morgan’s story?

Every chapter repeats itself!!!