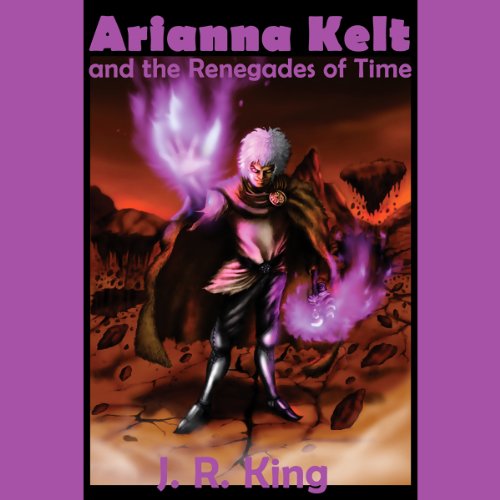 Arianna Kelt and the Renegades of Time

Beware the Law Gnomes....Enter Skyhall and become a wizard if you dare!

Arianna Kelt is a reformed thief and wizard seer. Now you wouldn't think being a wizard seer would be such a big deal, but it is a big deal to the Wizards of Skyhall. For you see, these particular wizards are sworn to protect the citizens of Earth from all the things they shouldn't know about - namely wizards, warlocks, and all the creatures of the magical realms that no humans should know exist.

Arianna Kelt and the Renegades of Time is the sequel to teen author J. R. King's debut novel, which he completed at age 12. The novel was published in 2006 when he was just 14. Shortly after his first book was published, he completed work on this second novel. With its publication, King, at 15, joined the ranks of a rare cadre of teen authors with multiple books in print. Listen to this novel and see for yourself why people all around the world are so excited.

What listeners say about Arianna Kelt and the Renegades of Time

Even better than the first one

King's debut novel "Arianna Kelt and the Wizards of Skyhall" was an utter delight. I was thrilled and glued to the recording from the first moment the story started to the end. When the second one came out I wasn't sure if the author could top the first and I was so glad when I found the author had. Any fan of Paolini or Rowling who hasn't listened to the Arianna Kelt books is missing out on a great story. King is the best teen author in print today.

The entire family has been listening to the Arianna Kelt books. This young author (15 years old) has created a magical world that far outshines Artemis Fowl, Eragon and Potter. The few rough edges in the story only made it all the better because you know the author will mature and be one of the greats. We loved every minute of it.

An exciting adventure for all ages!

What a fantastic book and a story that'll bring your imagination to life! My family truly enjoyed listening to the first one and we were so excited when the new one came out recently. This young author has tremendous talent and the story is fun and exciting. Digorence the gnome is hillarious.

You may ask, does this book succumb to the usual Second-Instalment-of-the-Trilogy syndrome, where its this one that falters and is generally the most boring of the three? The answer is NO! Not even one tiny bit! If there ever was a book that somehow expanded a universe, added to a monumental mystery, increased the incredible intrigue, wreaked havoc on your daily schedule, expanded on the old and lovable characters and tossed in a few more amazing characters to boot, its this one. I also think it relates to a typical teenage life in how a person thinks life is all carefree and wonderful and then a huge responsibility, like saving the world in Ariannas case, changes your opinion on things. Being able to travel between worlds is very interesting. Cant wait to get the third.

J R King does it again. Another great book that kept me at the edge of my seat the whole time I was reading it, and I thought Wizard of Skyhall was good! Like many other fans I am eagerly awaiting the release of the next book. I would recommend this book to anyone who would read it. Keep up the good work JRK!

Arianna Kelt and the Renegades of time is one of my all time favorite books. The author is a teen like me too! What I like best about the books are the characters of Arianna, Mortimer and Digorence. Very very very amazing!