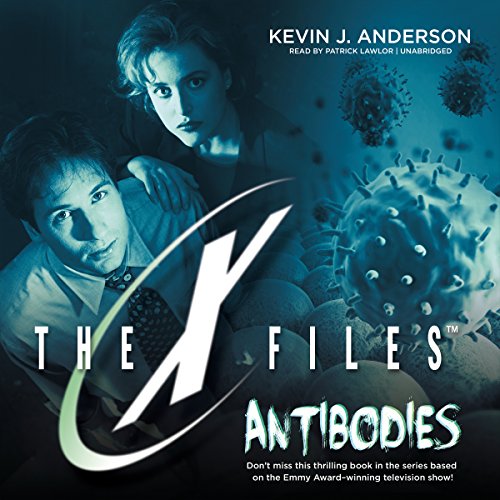 By: Kevin J. Anderson
Narrated by: Patrick Lawlor
Try for $0.00

Don't miss this thrilling book in the series based on the Emmy Award-winning television show The X-Files!

When a disease-ravaged body is found in the smoldering ruins of the federally funded DyMar genetic research lab, Agents Fox Mulder and Dana Scully fear that a deadly, manmade plague is on the loose. As the FBI agents investigating the X-Files - cases the bureau has deemed unsolvable - Mulder and Scully pursue the truth wherever it leads, even into the labyrinthine corridors of the FBI...and beyond.

Racing to contain the lethal virus before it can spread, Mulder and Scully make a chilling discovery. Before his death, Dr. David Kennessy, a hotshot cancer researcher at DyMar, had been experimenting with a promising but highly dangerous technology: microscopic biomachines that can cure any disease and heal any wound. In theory this research could be a miracle cure, perhaps even a doorway to immortality. It was also the only way Dr. Kennessy could save his leukemia-stricken son.

But when a second corpse turns up, savagely mutilated from within, it's anything but theoretical. Could machines created to cure have learned to kill? Scrambling for answers, Mulder and Scully are opposed at every step by faceless enemies with all the resources of the government - even perhaps of their own agency - at their command. These enemies will stop at nothing to ensure that the secret of immortality falls into the right hands - their hands.

As sinister forces close in, Scully fights to save the life of an innocent boy while Mulder comes face to face with a crazed and desperate man - a man whose slightest touch brings agonizing death and perhaps a resurrection more horrible still.

What listeners say about Antibodies

Unbearably repetitive and forced. don't waste your time. the author has dumbed down the text so much and it feels like trading through a pre teen drama.

The Reader either hates the X-files, never watched the show, or the producers had about $5 for a reader. I was taking risks since they have a return policy but I couldn't return this worthless garbage that, since I listen on my phone while I drive and it is illegal to touch the thing, I was seriously considering shoving my drawing pencils into my eardrums to MAKE IT STOP

4.5/5 Stars Antibodies by Kevin J. Anderson
The X-Files Book 5
Narrated by Patrick Lawlor
Run Time: 7 hrs and 48 mins
Summary: Is it a miracle cure or a deadly plague? This tale sets Mulder and Scully frantically searching the backwoods of Oregon to find a young boy and his mother who might be in grave danger.

Additional Comments:
- Nanotechnology is always fascinating, especially in an X-Files book, where it’s sure to wreck all sorts of havoc.
- This story might have a hair more action than the other books in the series.
- I enjoyed the pursuit of Jody and his mother.
- Have to love that the dog’s name is Vader.
- There are fun vestiges of sneaky government agencies within agencies. Have to appreciate the classic conspiracy vibes all over this one.
- Still a little weird to have the books feel so dated even though they’re scifi and paranormal.

Conclusion:
I forgot how much I loved this show (at least the first 6 seasons). Great series.

most x files like story so far in the series. seems like it would have made a good two part episode. still feel the same way about the narrator though. good for narration, but not good for acting out the characters. even characters that we all know and love and know how they should sound like (not looking for a perfect impression, but at least I want to hear the right intonation and speech pattern), but this guy just doesn't cut it.

if you are going to describe scenes in finite detail, at least have them proof read.
too many inaccuracies distracted from the story.
Similar to an executive attempting to talk street slang.

This certainly seemed like it could have been an episode of the show. It's funny though, how Scully keeps getting glimpses of the impossible and still clings to the old "if I can't see it, it can't be real" mentality.

The experience of listening to this audiobook was similar to listening to an action packed comic book being read. A fun ride, and a part of the Audible Plus catalog.

It could have been a great story, but it lacked overall personality and character development.

This audiobook flows most like an x-files episode. Unfortunately, it is an average story dealing with themes and ideas dome better in other actual episodes. The characterizations are pretty spot on, but falls flat with narration rather than full cast.

By far the best of the series!

Additive! I loved the minor characters and the story in general! The references to past episodes and Scully's cancer made it really fit into the cadence of the show.

Eternal goodboy and the horrors of beyond

Along with ruins this is one of the best X-Files books so far, body horror, nanomachines and eternal goodboys await you traveler.

Too long-winded and badly-written!

Thank goodness this was a free download! The narrator's voice was very grating and the story itself long-drawn out and predictable.

The quality of the writing was very poor - the constant misuse of adjectives drove me mad - one particularly irritating example: 'the isolated and vehement community'. Whaaat?

I love the X Files, but this is a truly terrible book.

Another FANTASTIC journey into the X-Files universe !!!!!
Can F.B.I. Agents, Fox Mulder & Dana Scully stop the spread of an unknown, and yet to be understood bio-agent ?? Can they find the cause of this bio-agent & who or what is spreading it ??
Can they get to the crux of the case, help the young boy diagnosed with a terminal Luekemia Cancer & his mother, hiding somewhere in the wilderness in a hidden cabin ??
And do this.......Before the Shadowy Cabal known as the "Syndicate" & the "Smoking Man", who have sent a team of lethal quick response agents, with the sole purpose of finding,.......killing,.......and leaving NO traces, NO witnesses, NO evidence !?!
If you need to find out more,.......
Then I strongly urge you to dive into this Fantastic X-Files story !!!!
Patrick Lawlor, has done a brilliant job of narrating this X-Files series !!! He has done a fantastic job of bringing the story, characters and mind blowing events within the X-Files universe to life !!!!
If like me,..... you are a fan of The X-FILES, then this series is surely a MUST !!!!!