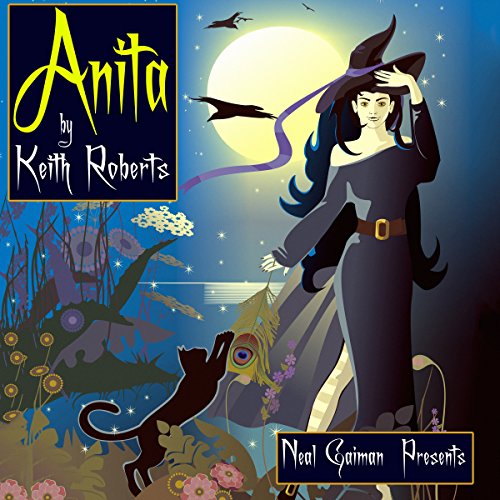 By: Keith Roberts
Narrated by: Nicola Barber
Try for $0.00

Award-winning author, narrator, and screenwriter Neil Gaiman personally selected this book, and, using the tools of the Audiobook Creation Exchange (ACX), cast the narrator and produced this work for his audiobook label, Neil Gaiman Presents.

A few words from Neil on Anita: "Anita is an almost forgotten novel by one of the finest UK writers. But it is a favorite of mine. Anita works on two levels: on the one hand, the stories are a product of the 1960s - they come out of a swinging world and a "Georgy Girl" time, and Keith Roberts, then a young art director, has captured the feel of the sixties. At the same time, he writes about a teenage witch being brought up by her Granny; he writes about a young witch falling in love, getting her heart broken, about change and growing up and compromise, about what magic is and how you can lose it sometimes and how you can get it back. And the character of Anita's Granny is amazing, one of Keith Roberts' best characters…. [Anita] set the template for all the teenage witch stories that come after, and she did it better and more magically. I wanted these stories back in "print", where people could hear them and could fall in love with Anita and Granny, as I did."

Anita lives in two worlds: the modern world of supermarkets and sports cars, radio and rock & roll, where she is a thoroughly modern girl with a thoroughly modern interest in boys and fast living and her own independence. But the ancient and rustic world of traditions, cauldrons, and familiars , where she and her Granny (a witch of the Old School, broom and all) invoke elemental spirits int he service of Him Wot's Down Under. She has senses no ordinary mortal can imagine (at least nine); with them, she can hear the voices of every creature of the night. She can changer her shape, call a drowned corpse from a lake, reverse the flow of time, and ride the Sea Serpent (there's only the one, you know; always has been -- always will be) deep into the ocean in the company of a mermaid, even though the modern world is trying to crowd aside -- and even change -- that world of witchcraft and magic. Yet, complicated as a young witch's life may become, Anita never loses her sense of fun, or her essential innocence.

When the Anita stories first appeared in Science Fantasy and The Magazine of Fantasy & Science Fiction in the late 1960s, they were immediately recognized as a strikingly original departure for the author of such celebrated works as Pavane. One critic called the original 1970 collection of these stories a "treasure." This new volume presents the stories in the author's corrected, definitive texts, a new introduction by the author, and an additional story which did not appear in the first edition.

To hear more from Neil Gaiman on Anita, click here, or listen to the introduction at the beginning of the book itself.

What listeners say about Anita

I would buy you this book! (if i could afford too)

I have a lot of love for this book. I don't think I would have ever of stumbled on to it by myself without the Neil Gaiman Presents feature, I am glad he did.

I love the way that Keith Roberts built up his rules of magic in this story, and how the mythology fitted together and how Anita at times didn't seem to realize the potential consequences or threats of her actions.

The structure of the story is also quite lovely, I want to choose to believe that Neil Gaiman's Graveyard's structure was inspired by this book. Each chapter could be picked up as an individual story, but Anita's world is fuller when read in sequence.

If you do get the chance, give this a listen.

A lovely bunch of stories

I downloaded this book because it was Neil Gaiman recommended.

I'm always eager to read (or in this case listen to) books and authors that are inspirations and influences on authors I love.

I truly enjoyed this book. I loved the each chapter seemed to almost be a sort of novella that added up to the story of a fledgling witch.

I also loved that this was written by a man. It has a truly feminine voice to it, and that's not just because of the fabulous job done by Nicola Barber in reading it. I mean that the way in which it was written truly seemed female, there was no forced "this is how girls should be/act" or any stereotypes that some male writers feel should be put in. it reads as just a story of a girl, who happens to be a witch, growing up and finding her place.

I highly recommend it.

Amusing stories that put you in the mind and heart of a free spirited young witch. Ms. Barber masterfully narrates each of the tales so that the text falls away and leaves the feeling of being there. Top marks for all.

Would you listen to Anita again? Why?

Anita Is by far my favorite character. Not to say Granny Thompson isn't awesome too. But if you want to compare Anita to any modern character you would be hard pressed to do so. She is unique and fun.

Which character ??? as performed by Nicola Barber ??? was your favorite?

Nicola Barber is a really talented actress. I think one of my favorite acted voiced characters would have to be Vortigan. (the cat) the meow she did was absolutely hilarious. Vortigan is a great character in the books, but brought to life by Nicola and made to be absolutely unforgettable.

I always loved this book. I loved it so much as a younger person that the school librarian actually gave me a copy to keep because I had checked it out so often. When I saw Audible had it I just had to get it! I was not disappointed. It is always great for a laugh, or just to make you feel good. The best part, you can put it down for ages and pick it up where you left off and never feel lost.

If you are a fan of the works of Hayao Miyazaki you might really enjoy this audio book. It has very much a similar flavor as Howls Moving Castle, The Borrowers, Spirited Away, Totoro, and The Cat Returns. As you listen to it you can in fact almost imagine Hayao Miyazaki, or Studio Ghibli producing it as an animated movie feature and it really isn't that far a stretch. It really does take you there.

Where does Anita rank among all the audiobooks you’ve listened to so far?

The performance on this recording is superb. The characters are memorable and the story a good read. Enjoy this wonderful book.

What was one of the most memorable moments of Anita?

When Anita goes back to where time began is a creative part of the book.

The scene where Anita's grandmother and sister fight and then have to rescue Anita is priceless.

This is a very addicting read.

Anita's grandmother is my favorite character.

Written in the mid-to-late 60's (I believe), the Anita stories were among the earliest in the now common genre of teenage/young-adult witches in the modern world. I'm finding the collection mostly charming, though it does occasionally seem a bit sexist, a bit too leering - an artifact of the times in which the stories were written, I suppose. Gaiman's introduction and the talented narrator, Nicola Barber, have made this delightful to listen to. Some of the stories are a bit weak, but most have been enjoyable.

This is filled with a series of short stories about Anita a young witch who lives with her Granny. It has wonderful parts that you wish would go on into a full book, but it is nice to get a break if you have other things to do, otherwise these stories wouldn't let you put them down until you had read the whole thing. Sad when they come to an end. The narrator is delightful and has a wonderful nack for the accents in the story. If you like magic, familiars, time travel, mermaids or the like you will really enjoy this series of short stories.

Kind of like reading a sitcom, a bunch of different little stories. Very enjoyable, just fun.

Fun, but in pieces.

This was a fun little thing I could turn to again and again over the year that I've had it. Each chapter functions more as a short story than a continuing narrative, so it was awesome to have this along in my collection every time I finished another story just shy of reaching my destination while driving.

The performance of Nicola Barber was great, with distinctive voices for the characters, she lent a pleasant tone to the great short shots that I took in.

What made the experience of listening to Anita the most enjoyable?

What was one of the most memorable moments of Anita?

I liked the part when Anita had a friend for the first time.

Have you listened to any of Nicola Barber’s other performances before? How does this one compare?

I would like to listen to her other works now.

Some things are better left as memories

This story has not aged well. It has a disjointed nature not simply in it's style but in it's story line. Short stories cobbled together without the benefit of an editor. Other than the grandmother you never get a sense of, or felt a connection with, the characters. At points I was unsure as to whether to expect a story edging into child sexual abuse. We listened as a family but the teenagers found the story and narrator so grating we gave up half way through. Disappointing.

The main character is a young woman who shines with a deep perception of the important things in life and an appreciation of the magical beauty of the world.