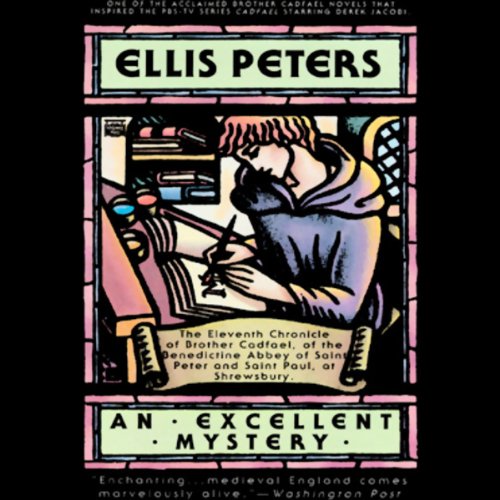 By: Ellis Peters
Narrated by: Roe Kendall
Try for $0.00

This is the eleventh chronicle of Brother Cadfael, of the Benedictine Abbey of Saint Peter and Saint Paul, at Shrewsbury.

In the year of our Lord 1141, August comes in golden as a lion, and two monks ride into the Benedictine Abbey of Saint Peter and Saint Paul bringing with them disturbing news of war...and a mystery.

The strangers tell how the strife between the Empress Maud and King Stephan has destroyed the town of Winchester and their priory. Now Brother Humilis, who is handsome, gaunt, and very ill, and Brother Fidelis, youthful, comely (and totally mute) must seek refuge at Shrewsury. And from the moment he meets them, Brother Cadfael senses something deeper than their common vows binds these two good brothers. What the link is he can only guess...what it will lead to is beyond his imagining. But as Brother Humilis' health fails, and nothing can stop death's lengthening shade, Brother Cadfael faces a poignant test of his discretion and his beliefs as he unravels a secret so great it can destroy a life, a future, and a holy order.

What listeners say about An Excellent Mystery

A poor choice for reader

The narrator made Cadfael sound like a young Indian rather than old Welshman. It was difficult to listen to.

The story was enjoyable, the narration was excellent. I did figure out the twist at about the halfway point in the story, but the reveal and resolution were excellent.

Did not see that ending coming!

I could not have been more pleased with this book. I really felt for the characters. Surprisingly, Cadfael is not actively solving a mystery, but he is in the vacinity as one unfolds for the reader.

Audio was muffled and over heavy on bass

This was a great story (although I had figured out the solution by the end of chapter 3).

But the audio was muffled, as though it was coming from inside a barrel or cave.

Cadfael pulls off a caper

No murder here just the mayhem of mistaken identities. The tangled mystery becomes clear fairly early on in the tale but how it will be untangled isn't revealed until our favorite Benedictine brother pulls off An Excellent Caper.

One of my Cadfael favorites

This Cadfael series written by Ellis Peters is one of my all-time favorite cozy historical English mysteries. I would strongly recommend this one. The narrator did a very good job with the various accents required and with the level of drama that she brought to the storytelling without making it melodramatic. I think it’s a shame that this one was never made into a stand-alone movie and was never part of the “Cadfael” British television series starring Derek Jacobi. It’s such a marvelous story.

Not a traditional mystery

This story was slow to develop but was adequate. It centered around two monks and the disappearance of a woman. The resolution was good but I would personally refrain from calling it excellent like the title

This is a very good story . It has a novel twist even for Brother
Cadfael.