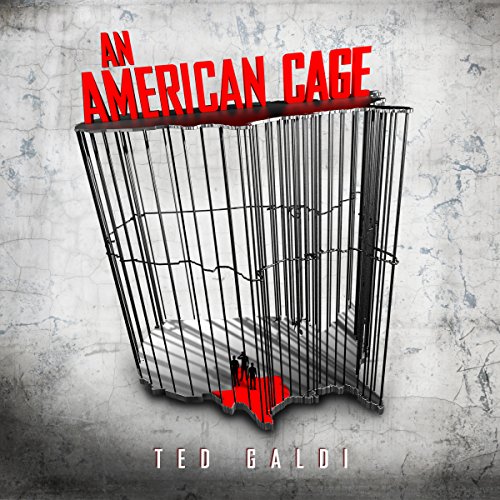 “Your best friend can be your worst enemy.”

Danny Marsh is a good guy and also an escaped felon. He has 24 hours to make it to freedom in Mexico. Along the way, he must evade the rabid Texas authorities and, even deadlier, the schemes of one of his closest allies, who isn't who he seems.

Then you’ll love An American Cage, the second novel by Ted Galdi, an Amazon number-one best-selling author who’s won Reader Views and Readers’ Favorite awards and been featured by Fox, ABC, and iHeartRadio.

Get your copy of this hit audiobook today and go on a pause-resisting manhunt through the depths of Texas with a freedom-hungry convict society may hate, but you’re sure to love.

More on An American Cage:

This action-packed psychological thriller is loaded with suspense, mystery, twists, and grit, all while having heart.

The story follows Danny and his two escape partners on a journey of self-discovery and redemption as they weave through a rocky landscape of family issues, guilt, betrayal, and questions about the nature of good and evil.

You’ll meet an eclectic supporting cast, including a renowned neuroscience professor, a car thief, a young female hitchhiker, a high-ranking member of the Aryan Brotherhood, and a local cop with national ambitions.

A hard-boiled police procedural, this Amazon number-one best-seller follows traditional detectives and police officers as they hunt the three escaped prisoners across a bevy of small towns and big cities in Texas.

Soon, Danny is fighting for a lot more than his freedom. His life, and those of the ones dearest to him, are at stake.

This edgy thriller culminates in a surprise ending sure to leave you both stunned and satisfied.

Ted Galdi is also the author of the novels Elixir and Lion on Fire, and the short stories "A Road to Nowhere" and "Hazel Is Missing".

Grab your copy of An American Cage today and embark on your Texas manhunt.

What listeners say about An American Cage

If only, nobody and I mean nobody, especially in Taxes U.S.A who was escapes from prison ( even if his escape brings the evidence that he is not guilty ) which don’t happen here but even if it did and the person clears his name he still gets 5 years for the escape no matter what.
Now about the audiobook, it’s excellent I really enjoyed it, Ted Galdi takes you on a journey from the beginning to the last page making it difficult to take breaks, and narration by Scott R. Pollak is always flawless.

Full heartedly recommend for all.

Free for an honest review.

Through An American Cage, Ted Ladi proves to be a talented writer. The mood and emotional charge of every scene is fully developed, and the feelings and behaviour of each character are explored in great detail. Unfortunately, in an audiobook, this results in an extremely long narration. The slow pace of the narrator combines with this to stretch every situation, which makes the reader feel too involved in the gloomy atmosphere of the book. As the story progressed, I felt increasingly sad for the poor protagonist, Danny, and definitely frustrated at the progression of unfortunate events in the story. Of course, given that the protagonists are fugitives, this is the only realistic outcome of their circumstances. In the end, I couldn’t stand the depression and had to give up on the book halfway through. Nonetheless, I’m sure that readers with a stronger heart will surely appreciate this highly emotional and well written story.
I voluntarily reviewed an advanced reader copy of this book. Opinions and comments are solely my own.

I enjoyed the story, particularly the character arc of Danny. He is basically a good guy who made a bad choice and is suffering the consequences. The descriptions of the characters and the little details about the scenes were captivating. I was able to envision the scenes as they played out. My only beef was the narration was a little matter-of-fact, more like I was listening to a history book in some cases than a narrative made to build suspense. I didn't dislike the reading, but it didn't pull me in like some narrators' readings do. I received this audible title at no cost in exchange for posting an honest review.

This was a really cool audio book! The story was full of action and kept you on the edge of your seat. The characters were well-developed and had a lot of depth. Despite the gritty subject matter, the book had a feel good ending.