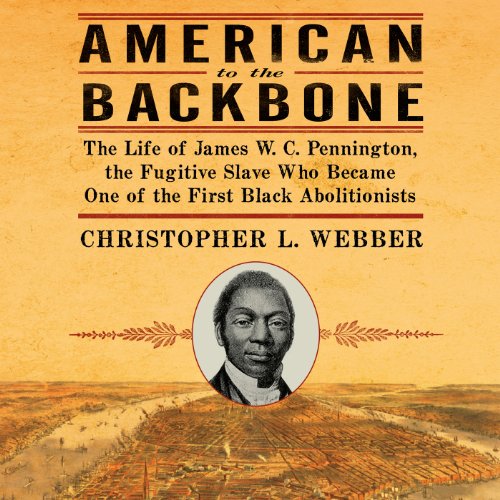 American to the Backbone

By: Christopher L. Webber
Narrated by: Karl Miller
Try for $0.00

The incredible story of a forgotten hero - a former slave, Yale scholar, minister, and international leader of the Antebellum abolitionist movement

At the age of 19, scared and illiterate, James Pennington, escaped from slavery in 1827 and soon became one of the leading voices against slavery prior to the Civil War. Just 10 years after his escape, Pennington was ordained as a priest after studying at Yale and was soon traveling all over the world as an anti-slavery advocate. He was so well respected by European audiences that the University of Heidelberg awarded him an honorary doctorate, making him the first person of African descent to receive such a degree. This treatment was a far cry from his home across the Atlantic, where people like him, although no longer slaves, were still second-class citizens.

As he fought for equal rights in America, Pennington’s voice was not limited to the preacher’s pulpit. He wrote the first-ever “History of the Colored People” as well as a careful study of the moral basis for civil disobedience, which would be echoed decades later by Gandhi and Martin Luther King, Jr. More than a century before Rosa Parks took her monumental bus ride, Pennington challenged segregated seating in New York City street cars. He was beaten and arrested, but eventually vindicated when the New York State Supreme Court ordered the cars to be integrated. Although the struggle for equality was far from over, Pennington retained a delightful sense of humor, intellectual vivacity, and inspiring faith through it all. American to the Backbone brings to life this fascinating, forgotten pioneer, who helped lay the foundation for the contemporary civil rights revolution and inspire generations of future leaders.

What listeners say about American to the Backbone

Until we can love one another our world will remain lost

Love it , it give me tons to think about and I learned a lot . I cried a lot laughed some and was angry most of the time. My question still is how could one person treat another person so bad so easily without any remorse and believe that we are all Gods creation ? And so much more to ask that I don’t believe will ever be answered .