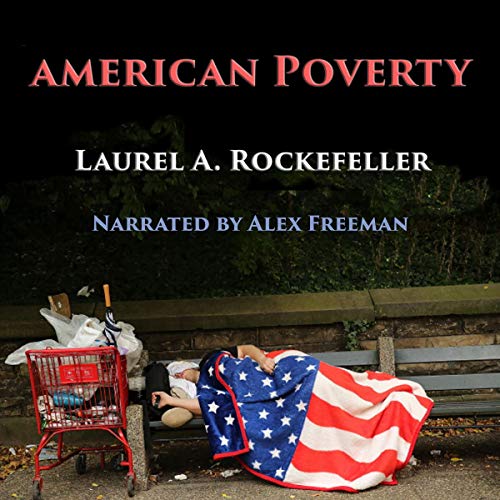 By: Laurel A. Rockefeller
Narrated by: Alex Freeman
Try for $0.00

In this thought-provoking historical and economic analysis, Laurel A. Rockefeller takes on poverty culture head-on, exploring what it means to be poor in the United States. She also takes a look at how America's closest, and much more economically successful, allies (Canada, Germany, France, and the United Kingdom) take care of their poor.

From housing conditions to hunger to poverty psychology, Ms. Rockefeller takes on the core issues while offering tangible steps everyone of every income bracket can take today to secure America's future and guarantee a secure America for our children.

Part two: features analysis on how each of us can and should address each facet of poverty, no matter how old or young we are.

Part three: offers a look at poverty and public policy toward poverty in Germany, France, Canada, and the United Kingdom. Comparative analysis between these US allies and the United States and the impact of poverty on foreign policy and national security.

What listeners say about American Poverty

This book is made up of essays about poverty in the USA. So many times you may think that a person is responsable for their poverty without seeing beyond and realizing that as a society we have become selfish and can’t empathize With people and that is the bigger causes of poverty. I felt this book was thought provoking and highly recommend it to everyone to gain a new perspective, to care more about other people. In a society in which so few people control most of the resources we must do better. Excellent writing and excellent narration. Recommended!!!

A view from within the problem.

It was a good point of view of someone on poverty with some actual suggestions for how to improve things.

great narration, very informative and engaging. I greatly appreciate the information imparted and would recommend this book

Although this is now dated it is very thought provoking.

Ms. Rockefeller is passionate in her thesis and I applaud her.

A lot of the points rang true as I was raised below the poverty level in a very rural town.

I will say that even though I don’t agree with all the statements made in this book Ms. Rockefeller is promoting some changes that need to be made.

I was hoping to gain some insight from this book. I try to hear out both sides of any debate. However, the main author of this book is way too biased. She glorifies socialism and does so in a way that tries to make anyone against it seem like they don't agree with human rights. In addition to glorifying a certain president stating since he left office this country has failed. The essay part of this book was okay. I really did enjoy the narrator though.

It’s very easy to criticize the only system you know and to praise a system you haven’t personally experienced. And Britain there’s free healthcare council housing which is the equivalent of section 8 or public housing in America and benefits. Council housing isn’t better than section 8 or public housing and just like in America if you look at the history most of these buildings or homes and apartments weren’t built in high crime areas as the high crime didn’t start happening until many years after the apartments or homes were there. We are humans and if it’s happening to you chances are it is happening to those in Britain. As far as healthcare goes if you need a life-saving surgery and your doctor has filled his list for that year you either have to wait until the next year or apply to go see a different doctor also, it can take months to get an appointment at a position office so let’s hope you’re not in pain or on the verge of dying. It’s easy to look at the guy next door and say he has it better when in reality you only know what he wants you to say. As for is Heaven 2200 vision I know that that is high enough vision in America to drive a can and to all the job. I am almost completely blind and only have one eye and I work a job with the living wage. Having said that I really enjoy reading other peoples opinions especially when it comes to other countries governments and how people love to see people and Britain have it so well and regardless of where you live if it’s a Third World country it could always be worse. As far as people getting benefits but wish they wouldn’t, I know generations of families that get benefits from the grandmother to the mother to the child the ants and uncles and this is an exaggeration. I know this to be a fact. In Britain they give benefits to single men who claim their inability to get a job and so many others that in many peoples opinion shouldn’t get them, but alas we are not politicians nor do we change laws we just read about it and give our opinion. I love Laura Rockefellers books and enjoyed this one as much as any other. I didn’t know I had so much in common with her and that makes me like her even more. I loved this narrator although I am used to Richard man now reading her books I think this one did just as good of a job.