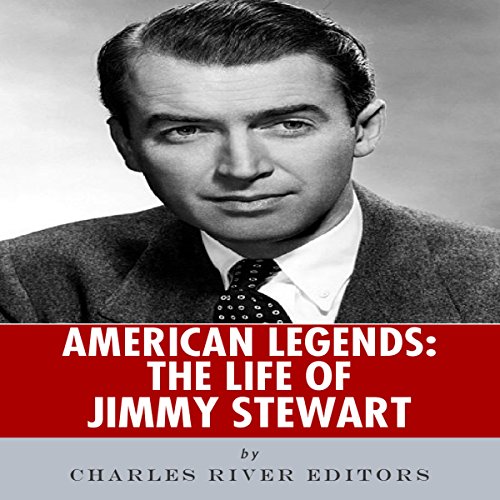 By: Charles River Editors
Narrated by: James Romick
Try for $0.00

"A feller came up to me the other day and said 'I don't know whether this means anything to you but you've given me and my family a lot of enjoyment over the years.' And I said to him, 'Does it mean anything to me? It means everything to me. That's the ballgame. That's it.' And I think that if I have done that to that man, and maybe a couple more...then I'm proud of that." - Jimmy Stewart

When the American Film Institute assembled its top 100 actors of all time at the close of the 20th century, Jimmy Stewart ranked third, behind only Humphrey Bogart and Cary Grant. There is a certain inevitability to these three actors ranking at the top of the list; after all, they were the dominant faces of Hollywood during the height of the era known as classical Hollywood cinema, a time before the onset of television when the movies still enjoyed relatively uncontested supremacy over American entertainment. The popularity of Stewart, Grant, and Bogart also extends well beyond the success of any of their individual films, reflecting their much broader cultural significance as monuments of Hollywood during its Golden Age.

In fact, if the list was reconstructed today, it is entirely possible that Stewart would rank first.

What listeners say about American Legends: The Life of Jimmy Stewart

This book has some pretty good information in it about Jimmy. The first 30 minutes was not to my liking. I wanted more about movies. But the last part talked about different movies. All in All I wanted more on movies and less on his personal life before movies. If my review was any help will you please click the helpful link. Thank you

Jimmy Stewart is the best!

Well, I actually put him at number two behind Cary Grant! I knew I liked Stewart's movies and was interested to learn more about him. This book covers everything from his parents and childhood to films, to his marriage and family life. I learned lots that I hadn't known before about the movie star and the man.
Narration was good and an easy listen.
I received a free copy of this audio book at my own request and voluntarily leave this honest review. .

Like many Americans, the first Jimmy Stewart movie I saw was an old VHS copy of It's A Wonderful Life when I was a little kid. Fast forward a few years and as a teenager I discovered more of his movies such as Pot O' Gold, Bend Of The River, and Winchester '73. Ever since I've enjoyed watching any of his movies I can find, well except for Vertigo. Vertigo was so effective that I hated it. Shop Around The Corner, yes. You Gotta Stay Happy, definitely. The Man Who Knew Too Much, a must. Two Rode Together, ye-ah! Rear Window, of course! From romantic comedy to westerns to psychological drama, Jimmy Stewart did it all and did it well. There's no doubt why generations have watched and loved him.

This audiobook is a brief overview of the life of one of Hollywood's best actors. It's not in depth but in the hour and twenty-some minute running time you'll get some nice insight and learn a few interesting facts that you may or may not have known. The audiobook production wasn't too bad and the narrator's voice was easy to listen to and a good match for a biography. This audiobook was a nice non-fiction break from what I usually read/listen and I will definitely be looking for more American Legends audiobooks in the future.

I received a review copy of this audiobook.
This book provides details and insight into the life of Jimmy Stewart of which I was previously unaware. I recommend it highly. It is a quick and easy listen.
The only downside is the poor Stewart impression used by the narrator when quoting him.

Beautiful collection and memories of who we knew him to be a gentleman, soft spoken, a family man.His movies always touched that tender heartwarming spot in us, Very well done, and glad I got the audio to listen to. Given audio for my voluntary review and my honest opinion

An Excellent Audiobook... Kindle Additional Value to The Experience

I completely enjoyed this audiobook. It is a very concise biography. I have purchased a longer biographical work about a Mister Stewart and I am using this as a foundation for that book. I need to add that there was a standard promotion from Charles River Editors wherein I received the Kindle for free and added the audiobook for a small fee, I think $1.99... This proved an excellent value to me. The Kindle had photographs and bibliography that I really appreciated. Thank You...