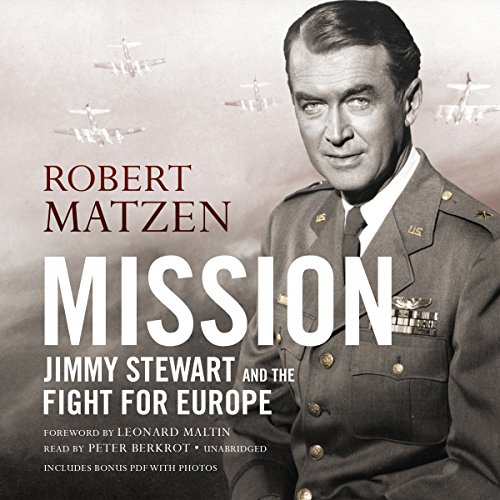 In March 1941 Jimmy Stewart, America's boy next door and recent Academy Award winner, left fame and fortune behind and joined the United States Army Air Corps to fulfill his family mission and serve his country. He rose from private to colonel and participated in 20 often-brutal World War II combat missions over Germany and France. In mere months the war took away his boyish looks as he faced near-death experiences and the loss of men under his command. The war finally won, he returned home with millions of other veterans to face an uncertain future, suffering what we now know as PTSD. Younger stars like Gregory Peck were now getting roles that might have been Stewart's, and he didn't know if he would ever work in Hollywood again. Then came It's a Wonderful Life.

For the next half century, Stewart refused to discuss his combat experiences and took the story of his service to the grave. Mission presents the first in-depth look at Stewart's life as a squadron commander in the skies over Germany, his return to Hollywood, and the changed man who embarked on production of America's most beloved holiday classic.

Author Robert Matzen sifted through thousands of Air Force combat reports and the Stewart personnel files; interviewed surviving aviators who flew with Stewart; visited the James Stewart Papers at Brigham Young University; flew in the cockpits of the B-17 Flying Fortress and B-24 Liberator; and walked the earth of air bases in England used by Stewart in his combat missions of 1943-45. What emerges in Mission is the story of a Jimmy Stewart you never knew until now - a story more fantastic than any he brought to the screen.

What listeners say about Mission

The first half of this book is a salacious overview of Jimmy Stewart's sexual conquests as a young man. If you thought you were getting insight into Stewart's heroic military service, think again. This author is primarily interested in the sex lives of movie stars, and with a judgmental angle to boot. I read 11 chapters and ultimately gave up. I recommend "Hank & Jim," which provides real insights into Stewart's life, war experience and career.

Beyond that, this is the worst narrator I've ever come across, and that's after listening to hundreds of Audible books. He's like a bad radio actor, overplaying everything with lip-smacking satisfaction. Skip this one.

I have read one other biography of Jimmy Stewart as well as approximately 100 books on The War. This story of Jimmy Stewart's time in Hollywood prior to the war and his service during the war was extensive and very well written. It especially captured the toll the War took on Jimmy Stewart as he flew bomber missions over Germany. And the narrator was excellent. He read the book with feeling and depth that matched the material well. He was much better than most narrators of non-fiction audio books.

I highly recommend this book to everyone but especially those who are interested in World War II as well as the Golden Era of Hollywood and one of it's greatest actors and a great patriot.

An absolute must for every Jimmy Stewart fan

You know how this story will end and still you are left hanging on every word! Like so many WWII veterans, there was a side to Jimmy Stewart that only those who served with him knew. This is that story. I've always liked him for his work as an actor. Now I love and respect him as a true hero of the war.

I enjoyed the story of Jimmy Stewart for the most part. His military service was outstanding and something I had never heard too much of.

I did not expect to hear about the great Jimmy Stewart’s sex life in detail and the many recognizable Hollywood female stars. That stuff could have been left out and the book would have been much more satisfying for me.

Would I recommend this book? NO. There are probably much better books than this one out there. I am returning this book to audible.

This is a well read audiobook of this biography of Jimmy Stewart. I read along on Kindle while listening. The audiobook is acceptably accurate. There were a few mispronunciations that did not really alter the story.

The actual biography is also very good. This is just a matter of taste, but I felt the biography wondered into gossip. There is conversation not only about who Jimmy Stewart associated with and dated, but who he "bagged". The actual word "bag" or bagged" is used repeatedly. I have little doubt some will find that interesting, and in truth I listened to everything, but I did not expect a biography of Jimmy Stewart to read quite that way. That may reflect that I am just an old "fuddled duddy". Thank You...

I think most of us who remember Jimmy Stewart think of him as the quintessential American from "It's a Wonderful Life" or countless other films, or perhaps as the courtly gentleman on the Tonight Show. Who knew Jimmy was a war hero and ultimately a General? He certainly didn't talk about it, at least that I can recall.

The book takes us through Stewart's early life through this success in Hollywood in the 1930s. We learn (again, this was new to me) that he was quite a ladies man, having affairs with most of the well known actresses of the day. His duty to country having been instilled by his father and grandfather, we wanted to serve in World War II. As a pilot, he wanted to serve in the Air Corps.

The story then turns to Jimmy's struggle to get into the service, and then to take a front line (as opposed to ceremonial) role, all at a relatively advanced age for combat pilots. Stewart flew the missions and saw many young men under his command not survive. He had to write the family members, and it is clear that it was painful and stressful to him.

The story is well told, from a first person point of view that the author (surprisingly) makes work quite well. The story moves along and it is a very good listen.

Like so many vets of that time quite too a fault. This was excellent told story of a time before we all lost our minds.

I really enjoyed the book and the information it conveyed about one of my favorite actors. He always seemed so genuine, and the fact that he flew 20 combat missions and was well respected by men whose lives he was responsible for reinforced that opinion.

Having listened to the book on audio, the only negative I have is the gentleman who read the book put too much drama into much of it. Imagine listening to Shatner’s Captain Kirk p-u-n-c-h-i-n-g out every word. If the info from the book wasn’t so interesting to me, I couldn’t have finished it.

Worth the listen, just be prepared.

Great story of a dedicated American during wartime. Freezing hell in the skies over Europe.

had a cool 1940s feel to it, though at times it got distracting. My opinion is is that the author took too many liberties in writing his thoughts rather than facts. I have difficulty believing an author when they claim 'Stewart was thinking...', not sure how the author could know (unless he used a diary as a resource) what the subject was thinking. This certainly adds drama, but from a historical perspective it lends to be more historic fiction rather than a true factual description of events.

Came to this as a fan wanting to know more about the man and the incredibly brave men of the USAAF and by extension the RAF.
My interest in his story was severely damaged by the mispronunciation of Norwich and then Kiel.
I then spent the rest of the production listening out to all the geographical place names to sense check them, which meant occasionally rewinding to listen to the narrative which became a secondary concern.
Now as a UK national, I understand that Americans have problems pronouncing other countries place names.
But, I would have thought with the obvious amount of detailed research that has gone on here, the producers would have also researched basic pronunciation of two well known Cities.
Such a shame.