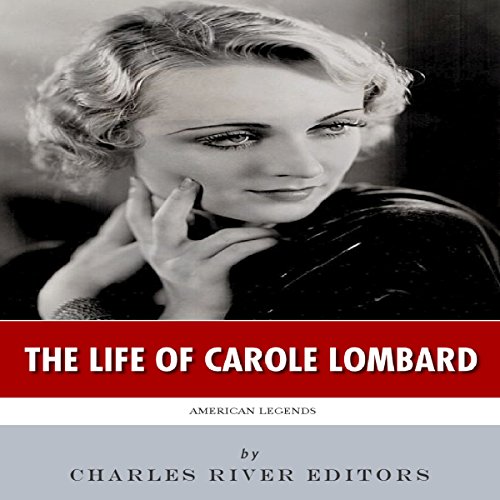 By: Charles River Editors
Narrated by: Wendy Almeida
Try for $0.00

"Carole Lombard's tragic death means that something of gaiety and beauty have been taken from the world at a time they are needed most." (Errol Flynn)

On January 16, 1942, just a few weeks after Pearl Harbor brought the United States into World War II, the nation suffered what were considered the first civilian deaths of the war when a plane crashed into the side of a mountain southwest of Las Vegas. Aboard the plane were 15 servicemen, but the plane was also carrying one of Hollywood's biggest stars: actress Carole Lombard.

Although Lombard's death and her marriage to Gone with the Wind star Clark Gable have overshadowed her career, her untimely death in 1942 cut short the life of one of Hollywood's most prominent stars at the time. In fact, Lombard's platinum look and her unique mannerisms had helped her become the biggest star of the screwball genre by the end of the 1930s, and her movies were so successful that she was the highest paid actress in Hollywood by the start of the 1940s. As English critic Graham Greene said of her, "Platinum blonde, with a heart-shaped face, delicate, impish features and a figure made to be swathed in silver lamé, Lombard wriggled expressively through such classics of hysteria as Twentieth Century and My Man Godfrey." Indeed, despite dying at the age of 33, the American Film Institute recognized her as one of the biggest film icons of the 20th century.

What listeners say about American Legends: The Life of Carole Lombard

Being a consummate admirer of Ms Lombard, both on and off the screen, I enjoyed it immensely. I recommend this short read to anyone even remotely interested in the short life of one Hollywood's most important icons. C. L. defies the stereotype of what most people think of, when they say Hollywood 'Star'.