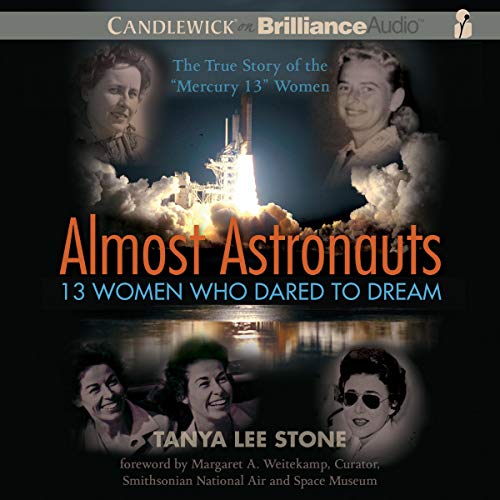 By: Tanya Lee Stone
Narrated by: Susan Ericksen
Try for $0.00

Have you ever heard of the “Mercury 13” women? Did you know that nearly twenty years before the first women were let into NASA’s astronaut program, there were others who tried?

What are the requirements for being shot into space, piloting a hunk of metal while carrying the hopes and fears of your nation? Mastery of flying, as well as courage, intelligence, resistance to stress, and fitness – any checklist would certainly include these. But when America created NASA in 1958, there was an unspoken rule in place: astronauts must be male, and they must be white.

Here is the tale of thirteen women who proved not only that they were as tough as any man but also that they were brave enough to challenge the government. Their passage to space was blocked by prejudice, jealousy, and a note scrawled by one of the most powerful men in Washington. But in the end, their inspiring example empowered young women to take their rightful place in the sky, piloting jets and commanding space capsules. Almost Astronauts is the story of thirteen true pioneers of the space age.

What listeners say about Almost Astronauts: 13 Women Who Dared to Dream

Growing up in the 80's and 90's with supportive parents who taught me that I could grow up to be anyone I wanted to, I didn't understand just how recently that had become true. This book made me angry for so many women who have been told they couldn't achieve their dreams just because of their gender. It also filled me with awe for the Mercury 13, who helped to pave the way for all the women who were eventually able to go into space.

A great piece of history

An ideal accounting of the history and challenges of the Apollo 13, delivered in blazing style. Readers may be shocked at the unexpected, factual twist at the end of this chapter of space achievement.