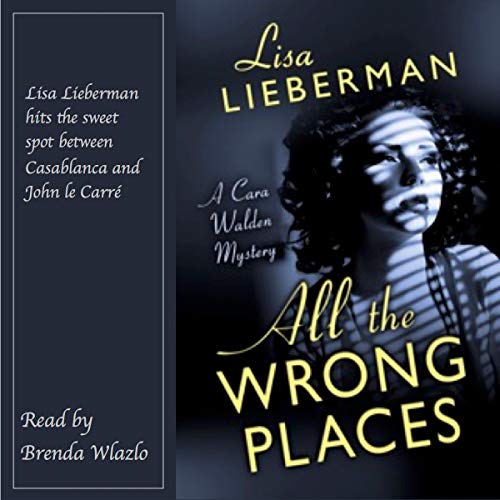 All the Wrong Places

By: Lisa Lieberman
Narrated by: Brenda Scott Wlazlo
Try for $0.00

Grieving over a broken romance and her newborn son put up for adoption against her wishes, 17-year-old Cara Walden arrives in 1950s London with her half-brother Gray‚ a blacklisted Hollywood screenwriter and closeted homosexual. Gray has looked after Cara ever since her mother‚ glamorous actress Vivien Grant‚ was found drowned in the pool at their estate.

As Cara embarks on a film shoot in Sicily and begins a love affair with a temperamental actor‚ she cannot help pondering the mystery surrounding her mother's death‚ but the questions she asks soon puts Cara's own life in danger.

Fans of old movies will get a kick out of All the Wrong Places, a historical mystery set in exotic European locales that pays tribute to the films of the '40s and '50s, capped off with a thrilling finale straight out of Hitchcock.

"Old Hollywood glamour comes vividly to life in historian, novelist, and film blogger Lieberman's series debut, highlighting the effects of the 1950s Red Scare on the movie industry and the tragedies that happened off the silver screen. Aficionados of Alfred Hitchcock and Hollywood-themed mysteries will find this historical noir right up their alley." (Library Journal)

What listeners say about All the Wrong Places

A Good Read for Those Who Love Old Films

This first in the Cara Walden series, author Lisa Lieberman gives us a story reminiscent of a noir film. I was hooked from the first chapter and captivated until the last sentence. It is easy to be swept away in the scenery and be sympathic to young Cara. I cannot wait for the next installment.

All the Wrong Places review

This was really enjoyable and well worth listening to. An A+ story with great narration.

It’s worth a listen.

I’m not sure the story is my cup of tea but I gave it time and found it interesting with enough curves thrown in to keep your interest. The narrator was wonderful!

The story takes place ten years after the end of World War II in poverty-stricken England.
The story takes place during the days of McCarthyism and her brother has been blacklisted. They escape to England to avoid prosecution.
Cara is writing her memoir and looking back at this time period. The movie/music industry was evolving and not always kind to those living in the industries during that time. We see Cara grow as she seeks answers to her mother’s death.

It took my a long time to get through this book. It was not due to the writing but rather to major changes in my parent’s health. I could not get into the story and re-started it many times.

I was not expecting such a dark novel. I’m glad I stuck it out. It was a coming of age novel for both Cara and the world during the time after the war.

I was given an audio copy of this book and am not required to leave a positive review.