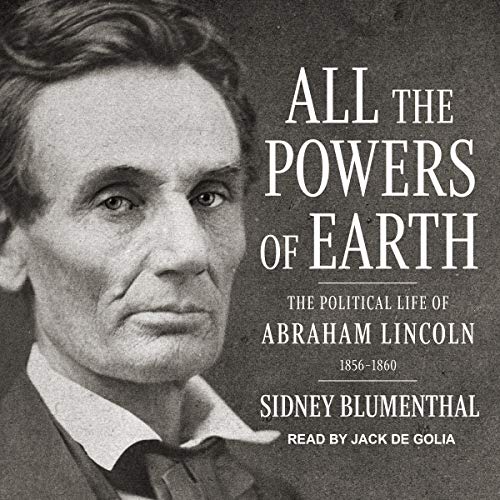 All the Powers of Earth

By: Sidney Blumenthal
Narrated by: Jack de Golia
Try for $0.00

In All the Powers of Earth, Lincoln's incredible ascent to power in a world of chaos is newly revealed through the great biographer's extraordinary research and literary style.

After a period of depression that he would ever find his way to greatness, Lincoln takes on the most powerful demagogue in the country, Stephen Douglas, in the debates for a Senate seat. He sidelines the front-runner William Seward, a former governor and senator for New York, to cinch the new Republican Party's nomination.

All the Powers of Earth is the political story of all time. Lincoln achieves the presidency by force of strategy, of political savvy and determination. This is Abraham Lincoln, who indisputably becomes the greatest president and moral leader in the nation's history. But he must first build a new political party, brilliantly state the anti-slavery case, and overcome shattering defeat to win the presidency. In the years of civil war to follow, he will show mightily that the nation was right to bet on him. He was its preserver, a politician of moral integrity.

What listeners say about All the Powers of Earth

Abraham Lincoln, The Rest of the Story

I haven't yet finished this book but wanted to let folks know, there is a lot of historical information here that I hadn't read about in the past. It has come to light that some political lessons of the past have not been heeded in today's politics. Jack DeGolia does an excellent job narrating this book. I've listened to similar books and the narration drones on. Not so with Jack who animates the characters as they are quoted. This is one book that I'll listen to more than once.

All the powers of the earth

Wow!There was a lot of information packed into this one!It is very detailed and well worth the listen.I learned things I did not know,or had forgotten.Jack de Golia was a wonderful narrator.I was given this free review copy audiobook at my request and have voluntarily left this review.'

A picture of the 1850’s political conflicts. Facts about S Douglas and C Sumner and W Seward and J Davis and J Brown I hadn’t known. Great addition to my knowledge about the “impending crisis.” Narration very solid

This book provided unusually keen insights into the political world in which Abraham Lincoln evolved. It deserves close study. It was enhanced by the narration, which was effervescent, lively and perfectly tuned to the text. I listened to the first volume with great surprise, as I did not think that a writer of contemporary political commentary could equal the work of a professional historian. I think in many ways both works have exceeded in insight the work of some professional historians, through the depiction of the political maneuvering that marked both Lincoln and his many rivals. I wish Volume two would appear as an audible book, to fill in the missing gap.

Understanding Our Roots of Democracy

A perfect book for 2020...understanding the foundation of the American pursuit of social equality through the compilation of historical records and personal correspondence of those well known to the political scene of the early to mid-1800s. The narrator does an amazing job telling the story. I especially liked his vocal impressions of Lincoln and Stephen A. Douglas. I learned so much about the political climate across the U.S. during that time frame; how politics and business became interdependent, and how the Supreme Court of the United States acted before, during, and after Chief Justice Taney announced the majority decision in the infamous Dred Scott case. Absolutely fascinating, I only wish the book had continued beyond Lincoln's election to the office of the Presidency. Thank you for sharing this knowledge with We The People.

Good on substance, poor on presentatoon

Bad choice of reader. He sounds like a prim old lady when reading Lincoln's words, and he does accents poorly. He does the gruff, alcoholic Douglas well.