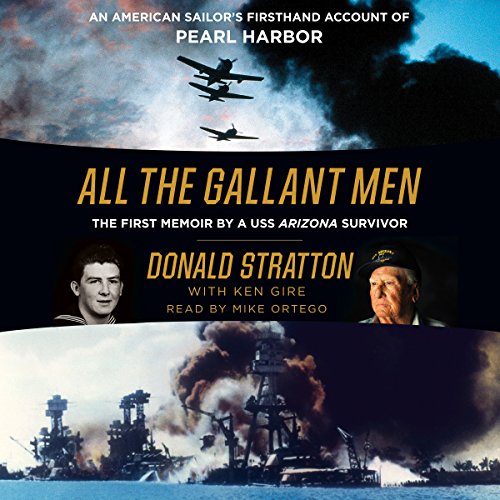 All the Gallant Men

By: Donald Stratton,Ken Gire
Narrated by: Mike Ortego
Try for $0.00

The extraordinary first and only memoir by a survivor of the USS Arizona, published in conjunction with the 75th anniversary of Pearl Harbor.

An unforgettable and moving story of tragedy, heroism, resilience, and redemption that is sure to become an enduring document of American history, All the Brave Men is a sailor's moment-by-moment eyewitness account of the Japanese surprise attack that decimated the US Pacific Fleet in Hawaii on December 7, 1941, and his inspiring return to active duty to carry on the Allied fight in the Pacific.

On December 7, 1941, the Arizona was moored in Pearl Harbor, Hawaii, alongside seven other American battleships. At 7:55 a.m., the leisurely Sunday morning's serenity was broken by the drone of bomb-laden Japanese Zeros swooping from the sky. The Arizona was the first battleship targeted in a massive surprise attack by the Empire of Japan; 353 imperial warplanes swarmed Battleship Row and neighboring Hickam Airfield in a meticulously planned assault launched to cripple America's Pacific Fleet.

Amid the terrifying chaos of explosions and incessant machine gun fire, 19-year-old Seaman First Class Donald Stratton raced to his battle station on the Arizona. Barely 15 minutes into the attack, a 1,760-pound armor-piercing bomb hit the ship, setting off a million pounds of munitions and 180,000 gallons of aviation fuel aboard. The explosion lifted the massive battleship out of the water, causing the forward deck to buckle, and engulfed it in an enormous 50-foot fireball that tore through the antiaircraft platform where Don and his team were stationed.

Burned over more than 65 percent of his body, Don, with his gunnery team, miraculously escaped the inferno; using their charred hands, they climbed across a 70-foot-long rope stretched 45 feet above flaming, oil-slicked water to reach the Vestal, moored nearby. While Don made it out alive, 1,177 of his crewmates perished - more than half the American casualty total of the attack.

But this remarkable story does not end here. After more than a year of grueling treatment, including learning to walk again, Don recovered and doggedly battled navy bureaucracy to reenlist. Determined to take the fight to the enemy, he participated in some of the bloodiest battles of the Pacific, including the invasions of New Guinea, Iwo Jima, and Okinawa.

Told in remarkable, never-before-revealed first-person detail, this powerful and uplifting memoir of war and survival resonates with the spirit, heart, and undaunted courage of such beloved best sellers as Unbroken and The Boys in the Boat.

What listeners say about All the Gallant Men

I am just a normal middle aged mom with a interest in war history due to my grandfather being a WW2 vet. this book is about much more than the war, or Pearl Harbor. It is full of life lessons and inspiration that made a permanent mark in my mind and on my heart.

To be a classic !

I believe this story should be made into a movie. To go with the movie
"Saving Private Ryan". Outstanding read.

94 year old Don Stratton was a 19 year old Navy man aboard the USS Arizona when the Japanese attacked Pearl Harbor on December 7 1941. He writes about his youth in Nebraska , joining the Navy fresh out of high school, the Japanese attack, his injuries (burns over 60% of his body), rejoining the Navy 2 years later despite having been honorably discharged, and his life since. I've toured the USS Arizona Memorial at Pearl Harbor three times and Mr. Stratton mentions details of which I was unaware. Three of my mothers brothers, two Marines and one Navy sailor, were there on the "day that will live in infamy". All three lived with relatively minor injuries, but none would discuss the attack in detail other than to say they were on duty when the attack occurred and it was horrible.

All the Gallant Men is a must listen treasure which I VERY, VERY HIGHLY RECOMMEND. Thank you, Mr. Stratton!

How they managed to allow me to see and feel a piece of that horrible moment in our history and the affect it had on so many? I am at a loss of words to describe the emotions this story invoked. God Bless our country, our armed forces and all the great things they represent.

What a great message. I am am army brat from a father who served 30 years in army / navy and brother served 25 years navy.

What a great story and thank goodness for brave men and women who serve so gallantly.

Our parents generation are truly the greatest ever.

I will be sharing this book with many

The first person account was one of the best I have read about WW2.

tough at times to hear the terribleness of war but incredibly humbling to know that many brave men and women performed under the hardest of conditions to support our freedom and our way of life. Thank you sir for not only your service but also for your influence as you lived life after the war.

Amazing but history by a brave man

“Have I lived a good life?” Why yes sir, it seems you did. It was an honor to hear your story and that of all of the brave men lost that day. This is a hard story to have end. I couldn’t quit listening.

All the Gallant Men

May we never forget the sacrifices of so many past present and future! Very well done all the way around. So heart felt.
Until we meet.

I was familiar with the history and the man before listening. To have them together with a more complete telling of his view of events than documentaries provide was like a whole new understanding. I truly recommend it for anyone and everyone.