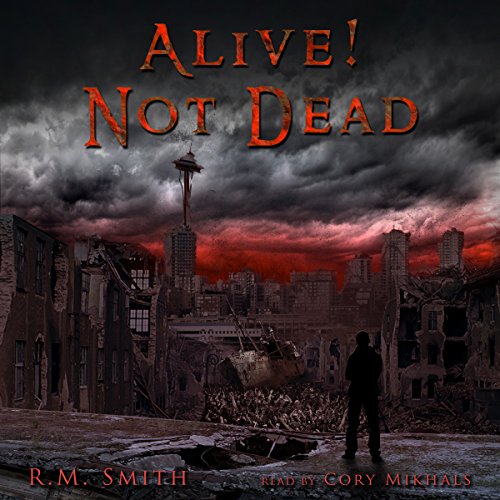 A plane crash high in the mountains outside Seattle, Washington marks the beginning of Dan Kingsley's journey through hell in Alive, Not Dead where undead rise, the world appears to flip, and the entire western third of the United States is destroyed.

Travelling further inland, avoiding the constant threat of zombies, rumors of tsunamis, and complete destruction, Dan meets several other survivors who have similar stories to tell.

All of them are unaware of just how bad it really is as the world falls apart around them.

As things go from bad to worse, Dan knows more than anything else that being alive, not dead, isn't all it's cracked up to be.

What listeners say about Alive! Not Dead!

Teenagers who never leave the house.

What was most disappointing about R. M. Smith’s story?

The complete and utter hash of a plot. It starts off with a plane crash, then changes into The Walking Dead, takes a stroll into disaster Sci-Fi territory, before ending up as a Hostel clone. It also has a Bond villain-style denouement, where the boo-hiss baddie feels the need to explain his actions fiendish plot - which in itself is so ridiculous that I actually exclaimed "Awww give me a break!" out loud on the train when I heard it.

The novel suffers from extraneous narrative, with the same situations and characters being described multiple times.

His accents were terrible.

What character would you cut from Alive! Not Dead!?

Who to keep in it, is the real question! The leads Dan & Mindy have to be the dumbest couple in literary history. They seem to have a penchant for walking into traps, getting captured and exercising absolutely no vigilance after escaping and walk blithely into the next ordeal.