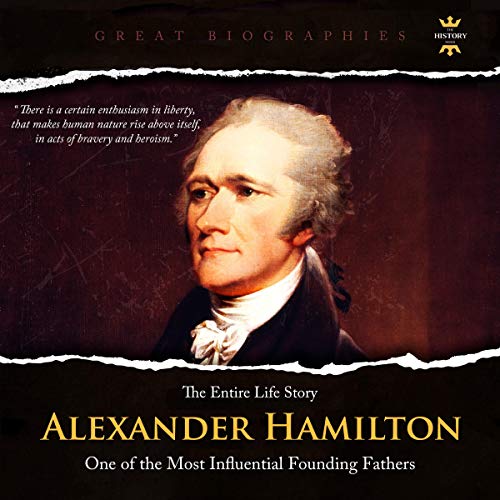 Alexander Hamilton: One of the Most Influential Founding Fathers. The Entire Life Story

By: The History Hour
Narrated by: Jerry Beebe
Try for $0.00

Alexander Hamilton started his life in the British West Indies. His story seems like a classic tale from rags to riches, of a poor boy whose hard work and perseverance allowed him to become one of the greatest historical figures of a nation. Alexander Hamilton left behind an impressive legacy, in no small part due to his success in defining the economic and political systems of the United States.

Hamilton’s Federalist Papers continue to be the basis for Constitutional interpretation and court decisions throughout the nation, and his creation of a national bank and decision to support a strong federal power over states’ power helped lay the groundwork for what could be considered a national issue over a state issue. However, his reputation wasn’t always so golden. These volumes offer a fuller picture of the life of Alexander Hamilton and the various factors that combined to make the life of such a driven, intriguing man.

What listeners say about Alexander Hamilton: One of the Most Influential Founding Fathers. The Entire Life Story

this book was very interesting and I talks about the life of hamilton. I never knew that the life of Alexander hamilton was a very troubleing. I love this book and was glad I stumbled upon it.

I consider that history books talk on behalf of many people who had made a great contribution for humanity.
I’m so glad, because it’s been a good practice in order to perform a better reading comprehension and to enrich myself with new vocabulary.

Great insight into the political intrigue in our nation’s earliest days. Hamilton was a flawed genius. This book explains his contributions as well as his foibles. Strongly recommended.

An incredible biography of Alexander Hamilton, one of the most productive brilliant minds of the early year in the US republic. In the end chapters one of the most dramatic books that I ever listen.

Great starting point if your curious about the founding fathers. It's a good overview that gives insight into their personalities and their contributions to the founding of the United States.

A wonderful concise segment of early American history. I always love learning interesting facts about those who helped create this amazing experiment.

If you are interested in knowing what these Founding Fathers went through during their time to create this country, this is the book for you! I loved it!

This book is a beautifully rendered portrait of Hamilton, both his public life and his private life .Recommended this book !!

he book is a great listen. It's easy to understand the importance of this great man. I highly recommend the book for anyone looking to learn more about this time in history

so interesting couldn't put it down

This was a simply-written book that had me engaged from start to finish.it does have a personal, conversation-like tone that I appreciated. it hit all the highlights of his life and career.

Just enough details to be interesting I enjoyed reading insights into other founding fathers that were Hamilton's contemporaries. If you love history as I do, you will enjoy this book.

It's the material that splits ordinary beings from deep thinkers, from Geniuses. I principally like that this product. The price bearing in mind the quantity and quality for this product is the key selling point and is really un-matchable with anything else out there.

In short his book is an amazing story - the players, the insights, the events....frankly it is all quite mesmerizing. There is a lot here that we know, there is a lot we think we know, and there is so much more that we (at least I) never dreamed: The treachery, the mobs, the scandals and the foibles of the great men who created our great Nation. And almost any line in the book (well except the parts about productivity) could be ripped from today's headlines.

Fantastic book . I listen it so fast it didn't seem to be as big as it felt. So much detail from his childhood right through the duel with Aaron Burr. I learned that Hamilton was truly a founding father, something I never considered until recently. Hamilton, as an immigrant, is a story that should echo today. He came from poverty, a broken family, and against all odds made something of himself when given the chance. But he had to work hard, much harder than most of us ever work today. But in the end, he impacted American life equally as much as anyone else. You will also get a new appreciation for how much and Madison were obstructionists to the new America.He wanted all the power to rest with the states. He and Adams both objected to the national bank, which resulted in more economic activity. Recommended !!

I went to see the musical, Hamilton, and then had to get the book that the musical was based on. The book is very educational and at some points very difficult to read. Also, in light of today's politics, I find this book extremely revealing. Many things that are happening today that make us frustrated with our government have apparently been going on since the beginning of time from the politicians having affairs to negotiations for votes with the politicians whether it is what is best for the country or not. I had no idea Alexander Hamilton was so influential in the creation of our government. I'm used to reading fast mysteries and crime novels. If you want something like that that is a fast read, this is not the book for you. If you want to learn about the beginning of our present day government, then this IS the book for you.

This is an outstanding, detailed biography that re

This is an outstanding, detailed biography that reveals the very good as well as the bad character traits of arguably the most important figure in American History. The documents that uses to support his portrait make clear that without his vision, there very likely would not have been the centralized government that permitted the abolitition of slavery, the development of a manufacturing based economy and a unified model of government that has endured. There is a decidedly eerie quality to the vicious, personal attacks between competing political partisans because it is so reminiscent of the current state of US politics. Finally, the gifted politician brought low by questionable judgment regarding sexual activities is a theme that is likewise a testament to the old saw that there is nothing new under the sun.

That about sums him up. Just kidding. That barely scratches the surface. All 900 pages of it. The author very much idolizes Hamilton, and paints just about every other founding father as people who did everything wrong. Hamilton was no saint. He was brilliant - no doubt - but no saint. He was hot tempered and a womanizer. He spent long amounts of time away from his wife and children chasing battles and defending his Federalist papers. You do wonder - had he lived - what else he might have accomplished.

However, I admit that I understand the character of Hamilton much more than when I began listening this biography. The biography also provides more detail on what happened before, during and after the Revolution that was not included in my history book. And the minute detail of the forming of our government is eye-opening, which has given me a new appreciation of American history.

The book covered his entire life. This book explai

The book covered his entire life. This book explains a man that made a huge impact on our society, It's amazing what you can learn when you take the time to read into someone's life, especially someone as important to history as this. One of the reasons I picked this book up was a desire to become more familiar with Alexander Hamilton. Not only is Hamilton left behind by the other founding fathers who would one day ascend to the presidency, but he is also over-looked as the only non-native major player in our country's founding.