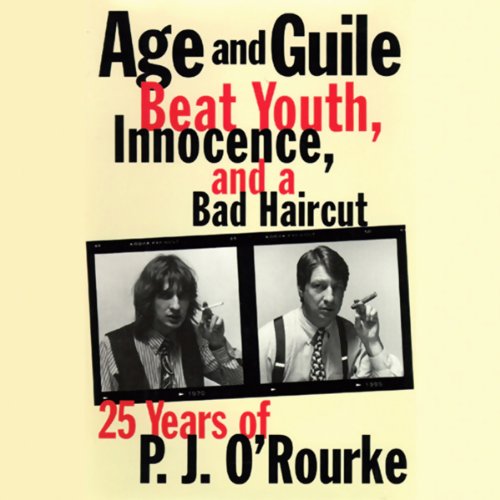 Age and Guile Beat Youth, Innocence, and a Bad Haircut

P.J. O'Rourke traces his development from hippie protester to conservative grouch to jaded humorist. Along the way, we are privy to his strange, twisted days as editor in chief of National Lampoon, as well as the in-depth looks at appropriate sports for middle-aged Republicans, namely those which can be engaged in with a smuggled Havana between the teeth - fly-fishing, bird hunting, deep-sea fishing, and of course, golf. Plus, you'll hear O'Rourke's take on the Virtues of Automobiles - because what good was oil doing sitting in the ground for millions of years? - and many other hilarious rants in this off-the-wall collection by America's premier political humorist.
©1995 by P.J. O'Rourke (P)1996 by Blackstone Audiobooks
Essays Satire Literary History & Criticism United States Political Science
Show more Show less

What listeners say about Age and Guile Beat Youth, Innocence, and a Bad Haircut

As a PJ admirer, I read this collection of old articles plus witty funny author's notes, years ago. The audiobook version is just PATHETIC, I am asking for a refund: the audio quality is so bad is it unbearable, impossible to listen. It is obviously a cassette tape remastered, and a bad job at it, anyway. First time I got screwed by Audible, after hundred of great books.

great and not so great

This one is not PJ at his best overall (and I am a confirmed fan). The earlier stuff is dated but the fishing and hunting are hilarious. Definitely worth a listen, though

As a long-time fan, I was happy to see more titles form PJ, and while I enjoyed the content (yes, the hunting, fishing and automotive pieces are gems), the whole experience was marred a bit by the poor audio recording.

Congratulations Audible! This 6 hour audio of P J o'Rourke's satire is excellent. It is extremely funny, sometimes even sad and educational. I feel enriched by this download and already listened to it twice while driving.

Excellent. He is the original Hunter S Thompson.

This is very witty and entertaining, silly and all the great things that this writer is. Wild out spoken, politically all over the place, just great.

It’s an awful recording, really bad quality just terrible. Like listening to book being read down a phone line from the 80’s

Poor recording of one of PJ's lesser books

Not my favourite O'Rourke book anyway (and. I am generally a big fan), but the recording is awful. Not a terrible performance by the reader but it sounds like it was recorded using 2 paper cups and a piece of string, and the echo / reverb sounds like someone else is reading the book half a second behind him on the other side of the room.

Coming to this after listening to PJ's latest book, recorded in 2017 and read by the author himself highlighted its deficiencies even more.

This is his worst book by far.