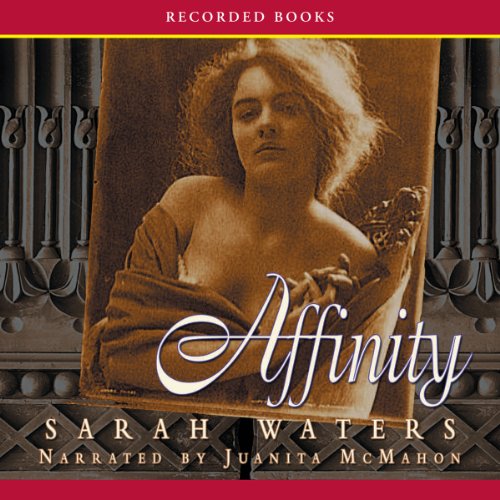 By: Sarah Waters
Narrated by: Juanita McMahon
Try for $0.00

Named Author of the Year at the 2003 British BookAwards, Sarah Waters is the author of Tipping the Velvet, a New York Times Notable Book.

Once inside the concrete walls of Millbank Prison, Margaret Prior, hired to speak with the female inmates, becomes all too aware that what she perceives to be reality may not be so. Bringing new ideas to her mind is the beautiful, but dangerous criminal Selina Dawes.

What listeners say about Affinity

Fascinating and Rich in Detail

When Margaret Prior accepts to become a 'Lady Visitor' at Millbank Prison in London, she is far from suspecting what tangled skeins await her in the endless corridors of the dank and cold prison, with it's wing holding women prisoners who are there for crimes as diverse as attempted suicide, infanticide, arson, petty theft, and fraud. Recovering from an undefined nervous illness brought on by the grief following the death of her father, she believes this will be a worthwhile occupation to fill her time away from home and her overbearing mother, and will bring much-needed relief to the women prisoners who are living in deplorable conditions in the jail, where the emphasis, typical of the times, is on punishment. Her presence gives the prisoners a rare opportunity in the day to speak to someone, for they are expected to be silent at all times otherwise, and it gives them a small break in their continual chores, as well as a chance for some empathy from a stranger rather than the harsh treatment they can expect from the prison matrons who seem to delight in taunting them continually.

Margaret is only interested in listening to the women speak of their experiences and describe their crimes rather than giving pious sermons to the women, as other lady visitors tend to do, and she is taken by the matrons around the jail to see how it is run, which allows the reader to get a comprehensive view of how things stood for women prisoners in 1874. It is rather obvious that Waters did thorough research for the novel and the details are many and quite striking. She writes beautifully and sets the mood perfectly so that one is carried along fascinating scenery in expectation of events to come. To some readers these scenes might seem too prolonged, but I found the details fascinating and as I listened to the audio version beautifully narrated by Juanita McMahon, was all too happy to be carried along the story at a deliberately observant pace.

When Margaret first sees Selina Dawes alone in her cell with her pale face turned to the sun, her attention is arrested. Selina is holding a violet, which she can't possibly have obtained from within the prison, so that its very presence there seems almost miraculous. Selina herself has a delicate and mysterious beauty, and soon Margaret visits her regularly and learns she is a spirit medium who is continually in contact with ghosts. Selina claims the ghosts bring her gifts, such as that violet Margaret saw her with. Furthermore, she says they can spirit her out of the jail anytime they wish to, but that they have a purpose for having sent her there, and soon it emerges that the purpose is for Margaret and Selina to have come together, for they are each other's Affinity.

But this is no simple lesbian romance story. And if one is patient enough and can enjoy the journey, the novel becomes a suspenseful ride which is impossible to put down in the second half and promises a big reveal in the end.

Where does Affinity rank among all the audiobooks you’ve listened to so far?

It's not the best, but it's way above average. It's not my favorite among Sarah Waters' work, but it's just because it's kind of a downer. Although, it's still beautifully written and well thought out. In my opinion, listening to Affinity is way better than listening to a book that was written in the era that this story actually took place.

Probably Margaret Prior, since practically all of the other characters are unlikable and wretched. I feel for her.

The voices she gave the prisoners. They were an amusing contrast to the prim sounding narrator.

Going to a prison to find hope probably isn't the best idea.

I can't go into much detail as to why I enjoyed this book without spoilers. However, I will say that I think it's totally worth a listen. It's slow at first, but I think it works for the book because when things do get tense it makes a much more powerful impact. This book is like a Jack-in-the-box, except the music it plays would be bleaker. I highly reccomend this book! Especially to those who enjoy dark stories and mind trips. I mean, come on, it's a Victorian ghost story that mostly takes place in a dingy prison, what's not to like?

Not one of my favorites from Sarah Waters.

I've listened to a couple books from this author and I have enjoyed the all. Well, all until now. I just couldn't get into the story. I kept listening to it in hopes that it would capture my attention, and it didn't. I love the reader though.

Sarah Waters created some fascinating characters with a variety of hidden secrets divulged gradually over the length of the story. The ending, however, left me somewhat perplexed and unsatisfied.

Slow at first, then twisted, then just sad. pushed through to the one depressing ending I hadn't guessed.

Would you consider the audio edition of Affinity to be better than the print version?

I haven't read the book in print, but I was able to absorb even the slower passages in this version. It takes a moment or two to get used to which diary is being read from, but once you do it makes very good sense.

What other book might you compare Affinity to and why?

I've read Sarah Waters' The Paying Guests and there are definitely similarities. I was a little but put off by some of the 'ghostly' aspects at first, but they made more sense as the book went on. I liked the use of a slightly untrustworthy narrator.

Have you listened to any of Juanita McMahon’s other performances before? How does this one compare?

I have never listened to her before, but enjoyed most of her performance. The only real weakness was the american accents which were simply laughable-- it would have been better to simply go with an upperclass english accent rather than whatever scottish/southern hybrid seemed to be coming out of her mouth at those moments.

The denouement was very gripping.

I can understand why a lot of people didnt enjoy this book. Sarah's writing style isnt for everyone. however, I loved this book! the poetic writing, the love I felt, the heartbreak, and so much more.

Would you listen to Affinity again? Why?

Maybe I would listen again. I was totally surprised by the ending and felt so sorry for the main character.

I'm so glad I stayed until the end!
Sarah is a great storyteller.
I can't wait to read her next one!

I loved the other books I read by Sarah Waters but this one was so boring, I had to force my way through it.